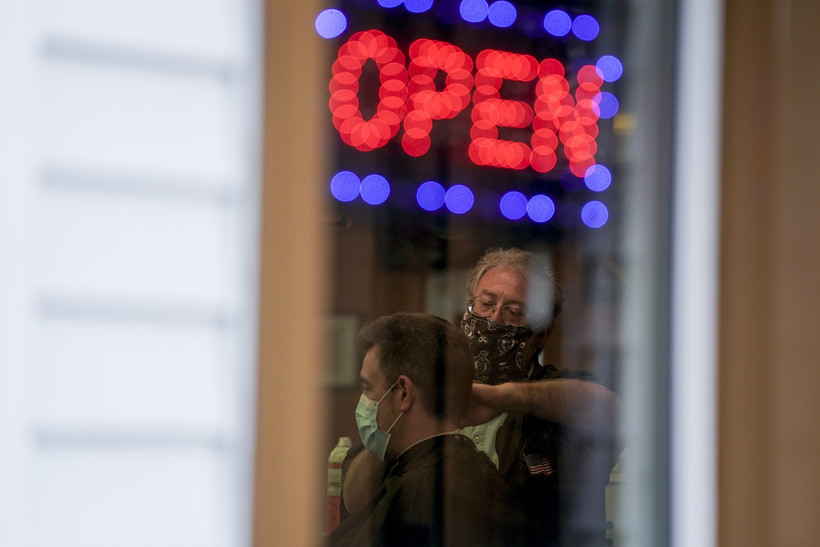 Rise In Deaths Remains Same As Saturday, With 453 People Dying From New Coronavirus In Wisconsin So Far
By WPR Staff
Share:

There are 12,543 positive cases of COVID-19 in Wisconsin as of Sunday, according to the state Department of Health Services. That's an increase of 356 cases from the day before.

According to health officials, Sunday's number of deaths from COVID-19 remained the same as Saturday's with 453 people in Wisconsin having died from the virus.

DHS reported 139,674 negative tests for the new coronavirus, an increase of 5,468 from Saturday to Sunday.

Counties in the southeastern part of the state saw some of the largest increases in confirmed cases. Milwaukee, Kenosha, Racine, Dodge, and Waukesha counties saw double-digit increases from Saturday to Sunday. Milwaukee currently has had 4,945 cases, while Kenosha has 838, Racine has 1,017, Dodge has 105 and Waukesha has 476. Fond du Lac County also saw a double-digit increase with a total of 139 cases.

Wisconsin's daily testing capacity has grown from 120 available lab tests in early March to 13,392 as of May 16. The surge in new tests is one reason for the increase in cases. The percentage of positive tests dropped from 8.3 percent Saturday to 6.1 percent on Sunday.

Gov. Tony Evers' "Badger Bounce Back" plan no longer has the force of law following a state Supreme Court ruling on Wednesday, but the state's dashboard for the reopening plan shows that Wisconsin hasn't met key gating criteria of a 14-day downward trajectory in flu-like illnesses and COVID-like cases. And the percentage of positive tests over that period is no longer on a downward trajectory over a 14-day period. Wisconsin's criteria for reopening were largely based on federal recommendations.

There are confirmed cases in 70 of Wisconsin's 72 counties. Burnett and Pepin counties reported their first positive cases of COVID-19 last week. Langlade and Taylor counties have no confirmed cases as of Sunday afternoon.

The growing number of cases follows the Wisconsin Supreme Court's decision Wednesday that overturned Wisconsin's stay-at-home order, striking down one of the primary tools Evers' administration has used in its effort to slow the spread of the novel coronavirus. On Thursday, Evers said the court's decision has resulted in chaos for state residents and business leaders.

The justices ruled the Evers' administration exceeded its authority when DHS Secretary Andrea Palm issued the "Safer at Home" extension scheduled to run until Tuesday, May 26.

The ruling doesn't mean life will return to normal in Wisconsin. It means it now falls to officials in the state's 72 counties and in local municipalities to manage their communities' response to COVID-19.

"That means you might have to follow a different set of rules then your neighbors across the street," Evers said Thursday. "And if you own businesses in multiple locations or have employees who live in a different community than the one they work in, things are going to get very confusing, very fast."

Evers said Thursday his administration had already opened some 14,000 small businesses around the state Monday potentially putting 90,000 people back to work.

"Despite that good work by Wisconsinites across our state who banded together, stayed home and stayed safe, Republican legislators have convinced four of our Supreme Court justices to throw our state into chaos," Evers said.