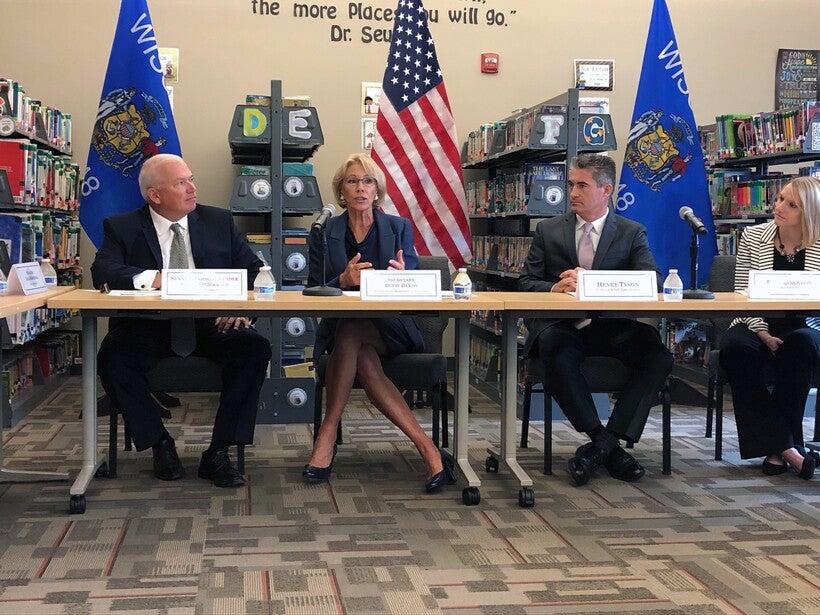 DeVos Stops In Milwaukee To Stump $5B Plan For School Choice

DeVos spoke at St. Marcus Lutheran School, one of Milwaukee's most successful "choice schools" — or any school that's an alternative to public schools. It also served as a kick off to DeVos' nationwide 2019 Back-to-School Tour.

St. Marcus, which serves 900 predominately African American students in the city’s Brewers Hill neighborhood, is often used as an example by advocates of school choice programs.

DeVos, who has been a long-time proponent of private schools and alternatives to traditional public schools, called the legislation, known as Education Freedom Scholarships, "the most transformative idea for education in decades."

The proposed legislation would allow states to opt into a program that provides individual and corporate donors dollar-for-dollar tax credits for contributing to scholarship programs that help families pay for private school tuition and other expenses.

The program would also allow states the flexibility to fund other programs like apprenticeships, after school and remedial programs.

It would be up to each state how to use the funds, DeVos said.

"The momentum is in the notion that doing the same thing and investing in the same thing and expecting different results is the Einstein definition of insanity," DeVos said. "This really encourages people to think broadly what freedom in education can really look like."

DeVos painted a grim picture of the country’s current education system, telling about 100 people in the school's gymnasium that students can't pass military entrance exams, meaning nearly 1 in 4 Americans who want to serve are turned away.

"The United States ranks 24th in reading, 25th in science, and 40th in math in the world. Think about it. These statistics have very real consequences for our future," Devos said.

Last week, the Wisconsin Department of Public Instruction released the results of Wisconsin Student Assessment System exams given during the 2018-19 school year. Those exams consist of the Forward Exam, which is given to third through eighth grade students, the ACT Aspire test, given in grades nine and 10, the ACT with writing in grade 11, and Dynamic Learning Maps given across all tested grades to students with the most significant cognitive disabilities.

When asked by reporters about choice schools that are not as successful as St. Marcus School, DeVos said it's all about a parent's choice to go somewhere else.

"There are students all across this country that they cannot make a choice to go somewhere else from that are poor performing," DeVos said. "What we have to do is challenge one another and give parents the freedom to go somewhere else to find the right place for their student. Parents are the ones that are the most interested in their childrens' futures."

During a round-table meeting before DeVos’ speech, state Senate Majority Leader Scott Fitzgerald, R-Juneau, said the legislation is one more option for what is already happening in Wisconsin.

"A lot of time with choice, people say you aren’t going to be able to do that," Fitzgerald said. "Every time we hear that we come up with a policy to advance that cause. The expansion statewide of school choice has been a great success and has become part of the fabric of the state and as a result of that we will continue to move forward."

There are currently about 28,000 students using vouchers in Milwaukee and 10,000 in other parts of the state combined, according to prior WPR reporting. Roughly 600 schools participate in the program.

Vouchers are used when parents choose to send their child to a private school, rather than their local public school. The voucher program grew 8.7 percent in the 2018-19 school year, while costs grew about 12 percent toroughly $300 million, according to Gov. Tony Evers' office.

State Rep. Dale Kooyenga, R-Brookfield, told DeVos there needs to be a sense of urgency in Wisconsin to improve its schools.

"If a foreign government forced upon us the education results we see in neighborhoods like here, we would consider it an act of war," Kooyenga said. "And yet there is really no act of urgency among governments at many different levels."

Before DeVos’ event, advocacy organization Schools & Communities United protested outside the school saying she has waged a war against public schools.

Can you hear Milwaukee now, @BetsyDeVosED?! Check out warm unwelcome Betsy received in MKE. MPS has been under constant attack from the very privatization schemes DeVos is pushing during visit to religious private voucher school that siphons critical funds out of MPS. #GoPublic pic.twitter.com/6t7BoSxvLW

When asked later why the federal government wasn’t directing more money to public schools, DeVos again said it should be up to parents where to send their children.

"I think every public school doing a great job plays an important part of our fabric," DeVos said. "Our argument is parents, the first educator, needs to have the power to make the same decisions as those wealthy and powerful have been able to do."