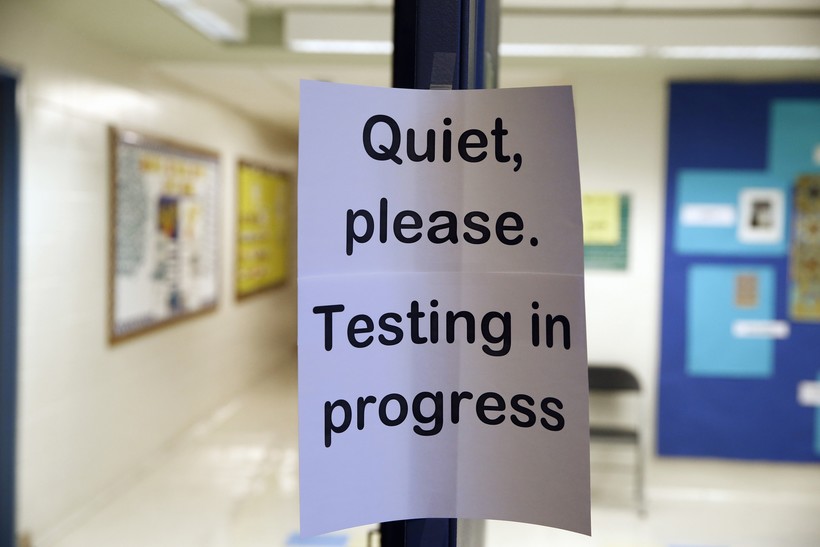 In this Jan. 17, 2016 file photo, a sign is seen at the entrance to a hall for a college test preparation class in Bethesda, Md. Alex Brandon/AP Photo

After several years of modest increases, Wisconsin students' math scores declined during the 2018-19 school year, according to the latest data from state education officials. Proficiency in English was also down slightly.

The state Department of Public Instruction released the latest scores for the Wisconsin Student Assessment System on Thursday. The report includes test results from the Forward Exam, taken by students in third through eighth grade, and the ACT, a national college admission test taken by 11th-graders.

Overall, student scores in math decreased slightly during the 2018-19 school year. The decline comes after three years of modest increases in math scores: 40.1 percent of all students were proficient or advanced in math in testing this spring, compared to 41.1 percent in spring 2018 and 40.5 percent in 2017.

"The new standards that we have adopted five or six years before are much more rigorous than the previous standards that the students were instructed to," Somasundaram said.

She said DPI will be looking into possible reasons for the latest decline in math scores.

Overall performance in English also declined in the latest report, going from 40.6 percent of students scoring proficient or advanced in 2017-18 school year to 39.3 percent last year.

Elizabeth Tomev, education information services director for DPI, said part of the declining scores comes from challenges with funding. She said students are entering the classroom with more challenges than ever before.

She said increased funding for K-12 schools in the latest state budget is "an important down payment" on the investment need in public education.

DPI officials also recognized the achievement gap between black and white students continues to be a problem for the state.

Somasundaram said that gap improved slightly because white students are not scoring as well as during previous years.

"In some areas, we see that the achievement gap closed a little bit but it's because of the decrease (in white students' scores) that we are seeing," Somasundaram said. "So that’s what we saw last year, it's what we are seeing again this year."

This year’s Wisconsin Student Assessment System report did not compare science test scores to previous years because students took a new version of the science assessment in spring 2019.

"We know whether students can do science," she said. "The Forward Exam engages students in work such as evaluating models, using evidence to support claims, distinguishing patterns, defining experiments and selecting which question will inform cause and effect determination."