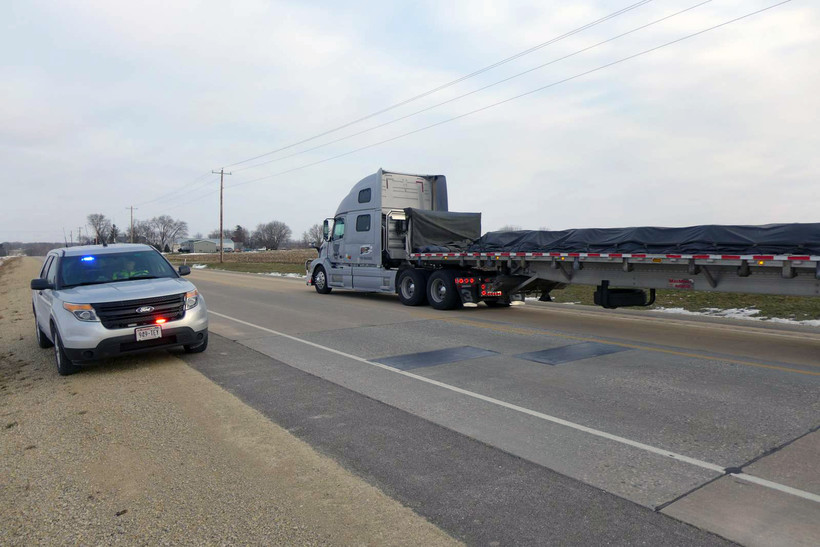 Weigh-in-motion scales are built into some highways like the one being patrolled by Sgt. Jeremiah Johnson south of Madison.

Weight Limits For Some Vehicles Have Gone Up While A Plan To Add More Highway Inspectors Failed
By Shawn Johnson
Share:

Sgt. Jeremiah Johnson is one of them.

"The weight limits are there to protect the infrastructure of the roadways," said Johnson on a recent morning while patrolling highways south of Madison. "The heavier the vehicle, the more damage it does."

Wisconsin’s mix of cold winters and hot summers stresses highways, but nothing damages roads more than heavy trucks. Johnson and other highway inspectors are focused on commercial trucks, or semitrailer. Depending on how much companies pay the state in vehicle registration fees, trucks can weigh up to 80,000 pounds.

Johnson was patrolling Highway 73, which runs alongside Interstate 39/90.

"The most efficient route is the interstate," Johnson said. "So if they’re taking these roadways, it’s probably more likely they’re trying to miss a scale."

In addition to 13 big scales, or weigh stations throughout Wisconsin, the state also uses several "weigh-in-motion" scales that combine cameras and metal scales built into the pavement to weigh trucks while they're driving. Highway inspectors like Johnson can also pull trucks over, which he did on this particular morning. As Johnson turned on his flashing police lights, the truck in front of him pulled off the road almost immediately. Johnson checked the driver’s records and inspected the vehicle, including its hoses, brakes, wheels and safety equipment.

This truck was in good shape and showed no signs of being overweight, so there was no need for Johnson to break out portable scales or escort the truck to a weigh station.

"If he's in compliance, we want to keep them moving because this is all money," Johnson said. "He’s delivering that, someone is paying for that product."

Once he finished with the inspection, Johnson checked his squad car laptop to see what he’d missed. Weigh-in-motion scales and cameras just down the road showed several trucks had passed by while Johnson was busy.

That included three trucks that weighed more than the 80,000 pound legal limit.

"It's frustrating, but you can't really let it get to you," Johnson said. "I mean, I can only do so much, and us as an agency, there's only so much you can do with the personnel you have. You can't get them all. But you can do the best you can with what you have."

Even a legally loaded heavy truck is damaging the road when it rolls down the highway. With overweight trucks, the damage intensifies. There’s almost no escaping it.

Ben Jordan, director of the Transportation Information Center at the University of Wisconsin-Madison's College of Engineering, said rain, snow, heat and cold all deteriorate pavement, but on the roads where they travel, heavy trucks do the most damage.

"Maybe there are 50,000 vehicles traveling on the interstate on a day," Jordan said. "Now the (state Department of Transportation) says 35 percent of those are trucks. One of those trucks would do the same damage to that highway as 9,600 cars."

In other words, Jordan said that means the fourth truck that drives down a road has already done as much damage as all of the cars that will travel that road the rest of that day. He said when trucks are heavier than the legal weight limit, the damage increases exponentially.

For someone unfamiliar with the world of highway construction, that statistic might sound like a game-changer, but it’s hardly new. It comes from a U.S. Government Accountability Office report to Congress from 1979.

Jordan said some of the state's most elaborate highway projects like Milwaukee’s Marquette Interchange are built thicker than typical roads in an effort to minimize damage from heavy trucks — engineers call this "perpetual pavement."

"But in reality," Jordan said, "Most roads aren’t built that way."

Instead, on most roads, every heavy truck causes at least a little bit of damage. It’s more apparent on smaller local roads, but it’s happening on big interstates, too. Jordan said the damage accumulates until fatigue causes pavement to break.

"That’s just the way that the physics of the whole thing works," Jordan said.

The 1979 report that warned Congress of the damages of heavy trucks also included some recommendations along those lines.

"While there are many uncontrollable causes of highway deterioration, such as weather," the report stated, "excessive truck weight is one cause that can be controlled. By strictly enforcing their weight laws, states could virtually eliminate damage caused by overweight trucks."

That hasn’t happened in Wisconsin. While the state’s highway inspectors are busy, and state-of-the-art scales help them work faster than ever before, the state has eschewed a zero-tolerance approach when it comes to overweight trucks.

"Someone could think that they are within the boundaries of the weight and then find out they're not and then get slapped with a terrible fine," said Republican Sen. Alberta Darling, the committee’s co-chair, in 2013. "We think sometimes there has to be more consideration and flexibility."

Soon after, the full Legislature passed a new law increasing the weight limit for agricultural equipment on Wisconsin roads by 15 percent to 92,000 pounds. The latest rewrite of that law passed the Legislature unanimously, and meanwhile, heavy agricultural equipment on local roads remains a challenging issue in some parts of Wisconsin where large livestock farms are more common.

Lee Engelbrecht, the town chair of Two Creeks in Manitowoc County, said his town has four large livestock farms. One of the farmers has an especially high volume of truck traffic coming and going from his property.

"He told us that there’s approximately 10,000 'quad axle,' or semitrucks going in and out of his farm in a year’s time," said Engelbrecht, who is also the president of the Wisconsin Towns Association. Engelbrecht said that much traffic from big trucks "raises havoc" with roads.

"You get a lot of wheel rutting," Engelbrecht said. "In the spring of the year when the roads are thawing, you can bust the blacktop up."

Engelbrecht said his town decided the road next to two of the farms was damaged beyond repair.  Two Creeks decided to repave a two-mile stretch of the road, a project he said cost $800,000. State Patrol highway inspector Derek Schuette discovered bad brakes on a truck at the Beloit weigh station. The truck is forced out of service until the brakes are fixed or it's towed. Shawn Johnson/WPR

When roads get damaged, they’re fundamentally less safe to drive on than smooth pavement, but heavy trucks create other potential safety risks, too.

At a weigh station in Beloit, State Patrol highway inspector Derek Schuette was examining a semitrailer when he spotted a problem.

Three of the truck’s 10 brakes, which should be shiny from the friction that comes with regular driving, were covered in rust. They weren’t working.

Schuette deemed the truck "out of service," meaning the driver had to park at the weigh station, and the company that owned the truck had to either send a mechanic to fix the brakes or have the truck towed. The company also received a ticket.

Not every truck on the interstate gets called in to be weighed. When they do, it’s up to highway inspectors to decide which trucks to send down the road and which ones to bring to the inspection bay for a closer look.

Schuette, who has been a highway inspector for 24 years, said he called this driver in for an inspection because his U.S. Department of Transportation number was not properly displayed on the side of his truck and he was unfamiliar with the trucking company. It was disruptive for the driver, but Schuette said there’s a good reason trucks like these get taken off the road.

"Legally a truck can weigh 80,000 pounds," Schuette said. "So now 80,000 pounds in that truck out there that we just saw and inspected together and its brakes aren’t working as well as they should. What does that mean for the car that’s in front of it?"

Schuette said he's seen enough examples like this that it's changed the way he drives.

"I will tell you when I'm driving either in my squad car or in my vehicle, if I'm in and around a semi, it's either passing it to get around it, or I'm pretty far off," Schuette said.

This story is part of a WPR series on transportation funding that explores how we got here and what happens next. Read part one and part two.

Reality TV Inspired This Poetic Look At People And The Things They Hoard
How Health Care In The U.S. May Change After COVID: An Optimist's Outlook
'All Our Opportunity Was Taken Away': Sanctuary Family Slowly Restarts Life
Biden Will Host Senate Republicans In Bid For Infrastructure Package
'Hacks': A Comedic Generational Divide Gets Bridged, (Jean) Smartly