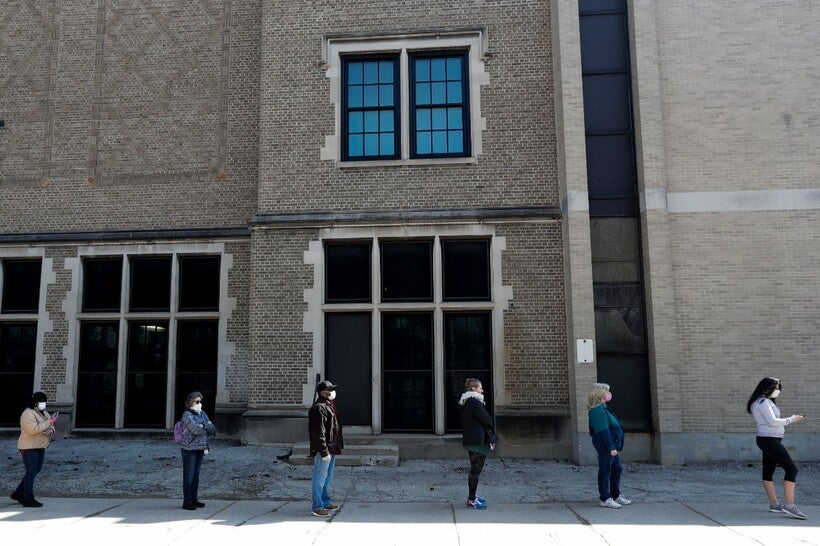 Voters observe social distancing guidelines as they wait in line to cast ballots at Washington High School while ignoring a stay-at-home order over the coronavirus threat to vote in the state's presidential primary election, Tuesday,  April 7, 2020, in Milwaukee. Morry Gash/AP Photo

Democrats tried to stop Wisconsin's April election, but when they couldn't, their voters had the last word.

While last week's race was officially nonpartisan, Democrats turned out far and wide for Dane County Judge Jill Karofsky, giving her a lopsided 55-45 percent victory over conservative Justice Daniel Kelly in the race for the Wisconsin Supreme Court.

"Geographically, almost everything that could have gone right for the Democrats basically did," said J. Miles Coleman, associate editor for Sabato's Crystal Ball at the University of Virginia Center for Politics.

Amid the continuing coronavirus pandemic, Wisconsin had never experienced an election quite like this one, where voters and poll workers wore face masks and gloves to handle ballots, and a decrease in polling places led voters to stand in line for hours in Milwaukee and Green Bay.

Despite all that, voter turnout hit 34.3 percent, according to the Wisconsin Elections Commission, making it among the highest turnout state Supreme Court races ever. Only 2016 was higher, when both Democrats and Republicans turned out to vote in competitive presidential primaries. This year's turnout percentage also matched the 2011 Wisconsin Supreme Court race, which was viewed as a referendum on former Republican Gov. Scott Walker just a month after he signed his landmark Act 10 law restricting the power of public-sector unions.

Democrats had long hoped this year's presidential primary would give Karofsky a boost, but that seemed unclear after most presidential candidates left the race, former Vice President Joe Biden emerged as the party's frontrunner and COVID-19 put a stop to traditional campaigning.

Barry Burden, University of Wisconsin-Madison political science professor, said that likely gave some Democrats more of an incentive to vote even if the race was all but decided.

"It may have been why Bernie Sanders decided to stay in the race through Wisconsin," Burden said. "His supporters tend to be enthusiastic and very passionate — attached to him personally. And they may have come out just as a show of their support for him and his platform and that trickled down to help Karofsky in the Supreme Court race."

According to unofficial results released Monday, almost 68,000 more people voted in the Democratic presidential primary than voted for Kaforsky. Sanders came in a distant second to Biden, but he still received about 293,652 votes.

What seems clear is that most voters cast their ballots before Tuesday, heeding the government warnings against large crowds and voting by mail instead.

While the total number of absentee ballots cast isn't yet known, nearly 1.1 million ballots were returned as of Monday, the deadline set by a federal judge for when ballots must be received by clerks.

Something remarkable happened in this Wisconsin election. This doesn't happen. pic.twitter.com/LkPAVEuGwy

Burden said absentee voting was "completely off the charts" in this election.

"Absentee voting is a new process for a lot of Wisconsinites," Burden said. "This is a state that has relied mostly on face-to-face voting at traditional neighborhood polling places. That got turned upside down in this April election."

Both political parties took advantage of this. Milwaukee and Dane County — both Democratic strongholds — led the way, but the Republican-friendly Waukesha County was right behind them.

But Karofsky cut into Kelly's numbers in Waukesha, Washington and Ozaukee counties compared to the 2019 Supreme Court race that sent conservative Justice Brian Hagedorn to the bench. She also won Brown, Outagamie and Winnebago counties in east-central Wisconsin. All three were won by Hagedorn in 2019, Walker in 2018 and President Donald Trump in 2016.

Coleman said it was noteworthy that Wisconsin's 3rd Congressional District, held by U.S. Rep. Ron Kind, D-La Crosse, went overwhelmingly to Karofsky after being carried by Trump in 2016. He said other statewide races since 2016 had followed the same pattern.

"Karofsky would have carried the Kind district by about 15 points, so that's a pretty substantial change," Coleman said. "Trump's win in the 3rd District is looking more like the exception than the rule."

Coleman cautioned against reading Karofsky's win as an indicator of how November's election would turn out, saying judicial races in Wisconsin "tend to be pretty volatile."

"I think it's difficult to draw much of a line between what happened in this race and what we'll see in November other than there's a lot of voter interest," Burden said. "For a million-and-a-half people to participate in the midst of a pandemic is impressive."