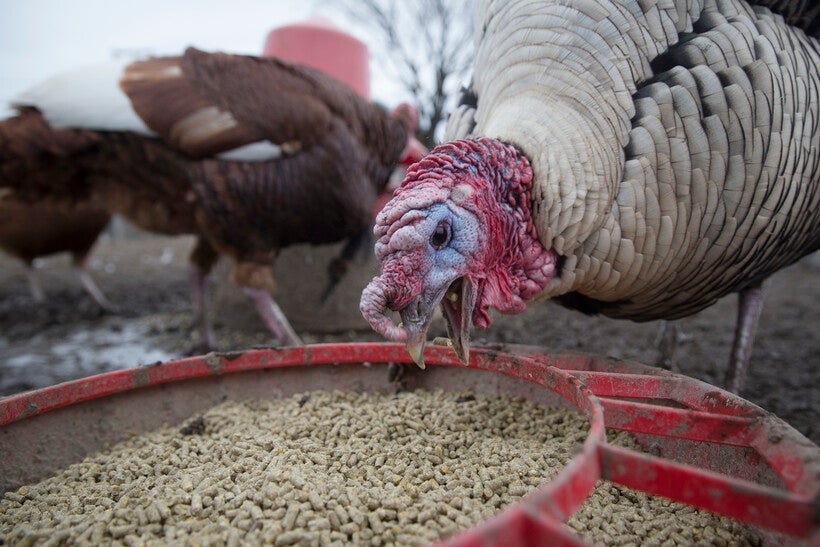 In this Monday, Nov. 17, 2014, photo, a domesticated turkey roams its enclosure at Violet Hill Farm before being harvested for Thanksgiving, in West Winfield, N.Y. John Minchillo/AP Photo

Turkey farms in Wisconsin continue to cater to local markets. But the latest numbers from the U.S. Department of Agriculture show some decline in production.

The 2017 Census of Agriculture released in April found 365 Wisconsin farms sold turkeys, down almost 9 percent from the previous census in 2012. Nationally, the number of farms selling turkeys increased by 15 percent from 2012.

Eighty-eight percent of the state’s turkey farms fell in the smallest production category.

Ron Kean, University of Wisconsin-Extension poultry specialist, said most producers are raising birds for small market sales, like a local butcher shop or directly to customers.

"One of the big problems is there's not a lot of processing availability," Kean said. "So that keeps a lot of the flock sizes small because people are processing at home."

He said the state only has around three custom plants that will process turkeys, so producers sometimes have to travel to have their birds processed.

Kean said the 2017 data could also reflect the impact of the 2015 outbreak of bird flu that hit the United States poultry industry. He said some farms in the state had to depopulate their flocks.

Kean said he thinks the state's turkey industry could grow if more plants were added. But he thinks demand for locally-raised turkey will continue to drive the market, instead of adding more large-scale producers.

Local demand is what has helped Deanna Scott and her husband Kyle grow their operation, Old Glory Farm in Elkhorn.

Scott said they raised 180 turkeys this year and have nearly sold out with two weeks to go before Thanksgiving.

"We started actually our first year with six turkeys, and we found out that people really wanted a fresh Thanksgiving turkey for their family, and they wanted to know where their meat was coming from," Deanna said.

But Kyle said their farm, in its fifth year, has been challenged by wet weather this season.

Much of the state has seen frequent rain since this spring, delaying planting and now harvest for many crops.

"It was a blessing in the summer to keep our pastures nice and green. But now that we're not pasturing, we're just left with mud wherever there's not concrete," Kyle said. "So we need to make sure that we're bedding heavily to provide a nice dry place for our turkeys to roost at night."

He said excess moisture can lead to illnesses in the flock, especially in colder temperatures.