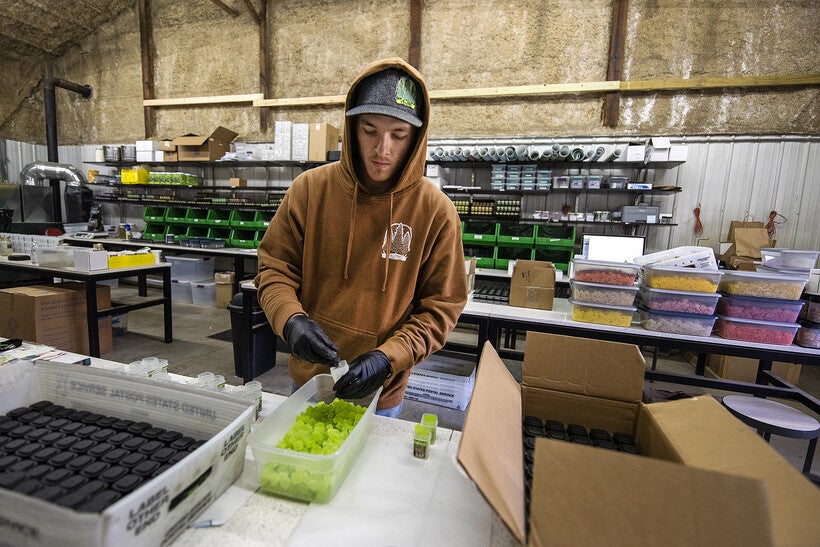 A legal loophole allows the sale of 'Delta 8' cannabis in Wisconsin. For one grower, it’s been a boon.

3 Tall Pines Farm turns hemp into THC products that are being sold across the state
By Rob Mentzer
Share:

On the counter in the shop at 3 Tall Pines Farm, there's a large plastic jar full of carefully wrapped joints. The back wall is lined with cartridges of vaping liquid in different flavors. Workers pack orders as the scent of cannabis hangs in the air. The farm's hemp plants are drying in the next room.

The Plymouth-based company has seen explosive growth in the last year from creating and selling what are called "Delta 8" cannabis products. They're capitalizing on a loophole in state and federal law that allows the sale of intoxicating marijuana-like smokeables, edibles and vaping cartridges in Wisconsin — despite the fact that the state does not permit the legal sale of medicinal or recreational weed. 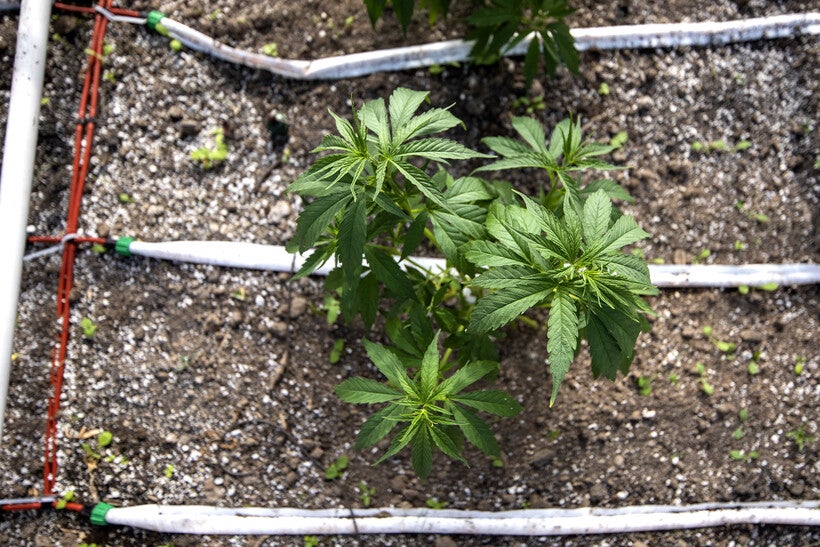 Craig Thran, the 43-year-old owner of 3 Tall Pines Farm, grew up in a farming family. His uncle owned an apple orchard in Pardeeville,and his family helped manage it. He hated farming growing up, he said, and studied architecture in college. But after building a career for himself with a suburban Milwaukee construction company, he found he missed being on a farm.

In 2019, he and his fiancé, Jennifer Brussveen, bought a farm in Sheboygan County with the intention of selling CSA shares. They grow vegetables and keep chickens, and are making plans to add livestock and expand their crops.

In late 2019, Gov. Tony Evers signed a bipartisan law permitting Wisconsin growers to cultivate hemp. It's the same plant that marijuana comes from, but hemp also has other uses. Wisconsin had legalized non-intoxicating cannabidiol, or CBD, products from the plant in 2017, and lawmakers wanted Wisconsin farmers to be able to join that market. 3 Tall Pines started growing the newly legal crop in 2020, and made its first sale — a pound of industrial hemp — in November 2020.

Then they got into the Delta 8 market. 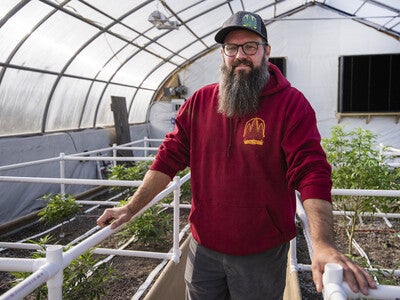 Craig Thran is the owner of owner of 3 Tall Pines Farm. Angela Major/WPR

"We might break $2 million (in revenue) this year, the first year," said Thran, who wore a 3 Tall Pines sweatshirt and a long, well-kept brown beard. "We're pushing to do it."

3 Tall Pines, which now directly employs a dozen people and contracts with about a six more, is doing something different from most Wisconsin hemp growers. Where most sell on the commodities market — the same way farmers sell corn or soybeans by the bushel — 3 Tall Pines launched its own line of products. On its website, the farm sells vaping cartridges, gummies and a Delta 8-infused caramel pumpkin pie bar. It's become a consumer-facing brand, not just a grower.

There were about 5,300 acres devoted to hemp in Wisconsin in 2021, according to state data, with an average size of about 40 acres. But the number of hemp growers in the state was sharply down in 2021, and there are still more than twice as many growers as there are processors.

Thran and Brussveen work on only 8 acres of land. They have a single greenhouse for their hemp plants, with plans to build one or two more.

"You can make a lot of money, we're finding, on a very small acreage," Thran said. "If we can show farmers how to convert what they're doing in the commodity game to make money on a smaller footprint, everybody wins." 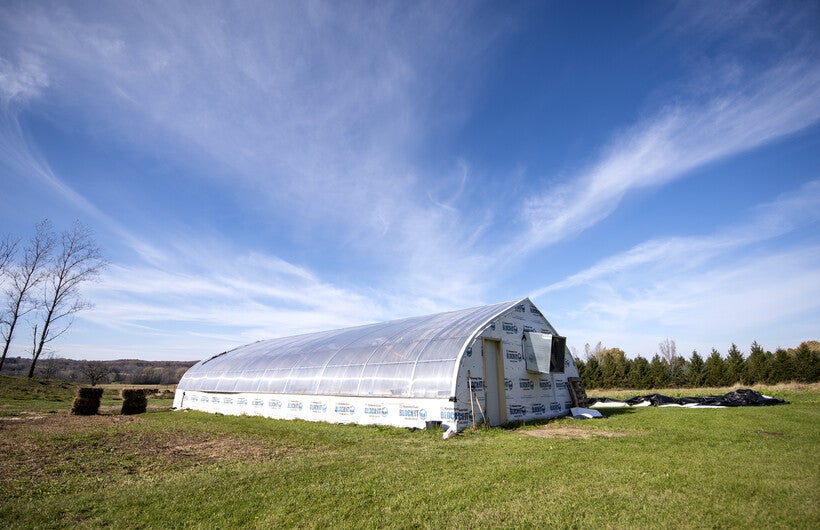 Thran is evangelical about the potential benefits of the hemp plant — not just in documented uses of medicinal marijuana and CBD products, but also in new applications that the drug's prohibition has prevented scientists from exploring. He sees the recreational Delta 8 products 3 Tall Pines produces as a means of growing his business, but he has a different end goal. He wants his farm to supply medicinal cannabis products.

"That's where the need is for human health," Thran said. "It's also where the money is."

Of course, that would require a change in the legal status of medical marijuana in Wisconsin. Meanwhile, the murky legal status of Delta 8 may put that part of Thran's business on precarious ground as well.

'There is no regulation. It is the Wild West.'

Billboards along Interstate 94 and elsewhere in Wisconsin promote the marijuana dispensaries of Illinois and Upper Michigan. Iowa and Minnesota permit the sale of medicinal marijuana; Minnesota lawmakers have made a push to expand that to recreational uses, too. Among Midwestern states, Wisconsin is unusually restrictive of the drug.

Wisconsin's legal CBD market allowed the sale of topical oils and other products used to treat seizures, aches and anxieties. Those products have a cap on the amount of THC, or tetrahydrocannabinol, which is the drug found in the hemp flower.

More specifically, it's a particular tetrahydrocannabinol called Delta 9 that gives marijuana users the high associated with that drug.

But there are other forms of THC contained in the hemp plant. One of them is Delta 8. It's chemically similar, and it also produces a high. But where federal law explicitly outlaws the production, sale and possession of Delta 9 THC, it's silent on Delta 8.

"The way the 2018 Farm Bill was written, it was very specific," said Chris Lindsey, vice president of policy for the U.S. Cannabis Council.

In response to calls from farmers interested in the CBD market, that law specifically excluded hemp plants from federal drug penalties, he said, provided the products didn't exceed a threshold of 0.3 percent of Delta 9 THC.

Eighteen states have limited or banned the sale of Delta 8 products. These include states that allow the sale of recreational marijuana such as New York and Colorado, and states that have banned cannabis in all forms, such as Kentucky and Mississippi.

In Wisconsin, Evers, a Democrat, has called for the legalization of recreational marijuana, something Republican legislators have so far prevented. But the lack of a legal framework for the sale of THC products and the lack of political consensus to ban the sale of Delta 8 products has created a situation where the new intoxicants have flooded the state with few regulations in place.

"Right now, there is no regulation," said Jeremy Smith, president of Tabease, a Waukesha-based company that sells Delta 8 mints. Smith also oversees lab work for 3 Tall Pines. "It is the Wild West. ... This industry has zero regulation right now, and it's getting to the point where it needs it."

Smith and Thran are at pains to describe the care their companies take in refining their products, ensuring they aren't contaminated with residual acids or other potentially harmful chemicals. But they acknowledge that not everyone in the industry is as careful.

It's not just a theoretical concern. In late 2019, the Centers for Disease Control and Prevention investigated an outbreak of lung injuries associated with similarly unregulated vaping fluids, including those used in THC vaping cartridges. There were so many emergency room visits that scientists gave the syndrome a name, EVALI, for "E-cigarette or Vaping Use-Associated Lung Injury." Evidence now suggests the cause of EVALI was Vitamin E acetate, a condensing agent then used in many popular vaping products. 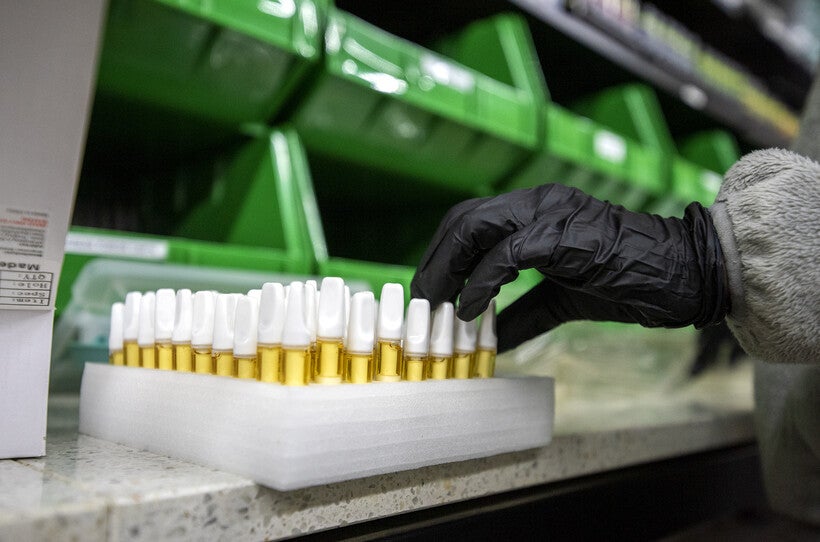 For the legal marijuana industry, the risk of a similar health crisis around unregulated Delta 8 products is that it could create a backlash against other cannabis products. The U.S. Cannabis Council has called not only for national legalization of Delta 9 THC, but also for federal regulation of Delta 8.

"We're concerned that there's going to be a bad reaction at some point," Lindsey said. "As this continues to get more popular, if it's not regulated, what do you expect?"

New frontiers for cannabis products, but new regulations may loom

Inside 3 Tall Pines' greenhouse, it's about 78 degrees year-round. Here they cultivate various smokeable strains of cannabis, with names like "Forbidden Five" and "Pine Walker." After the plants flower, are harvested and dried out, they go to Smith's Waukesha lab, where he and two other scientists refine them to isolate the Delta 8 THC and to ensure the products are below the legal threshold for Delta 9 THC. 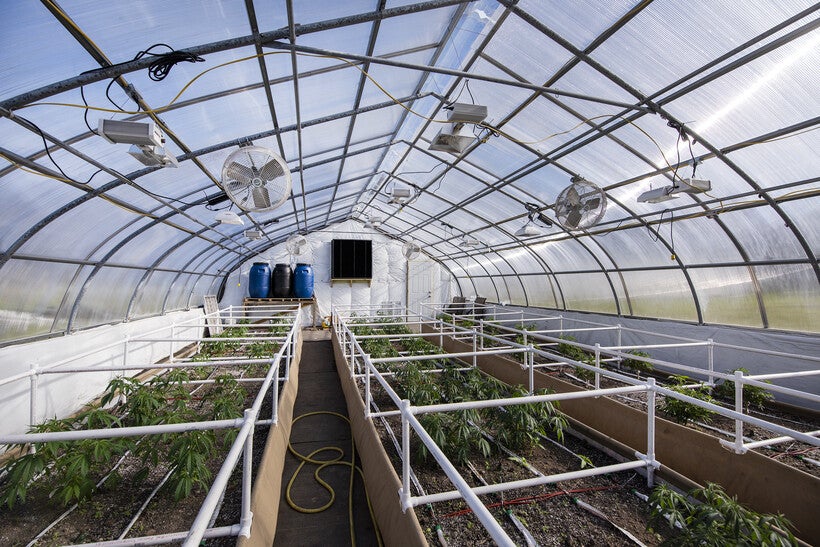 That doesn't mean 3 Tall Pines hasn't experienced resistance from law enforcement. In July, Thran said the Langlade County Sheriff's Department raided the Antigo facility where they produce edibles and seized their products. After about three weeks, Thran said, they returned everything.

The Langlade County District attorney did not respond to a request for comment.

Recent statements from the federal Drug Enforcement Agency have given Delta 8 makers some reassurance that the agency is not on the verge of issuing a new interpretation of the law that would outlaw Delta 8.

"The only thing that is a controlled substance is Delta 9 THC," said DEA official Sean Mitchell in an April town hall with the U.S. Department of Agriculture. The agency is "certainly aware of the concern of Delta 8," Mitchell said, adding that the DEA and other federal agencies are looking at policy options.

Those comments were widely interpreted as a sign that the DEA was not poised to seek sweeping new restrictions. And last month, a Delta 8 industry website published a September letter from the DEA explicitly stating that hemp-derived Delta 8 is excluded from federal drug laws.

That doesn't mean there aren't moves to regulate it. In September, the federal Food and Drug Administration issued a lengthy health warning about risks associated with Delta 8 products. Wisconsin lawmakers could ban or limit its sale here, and local governments can outlaw it by ordinance. In October, the city of Rhinelander passed an ordinance banning the sale or use of the products there. In a Facebook post, the Rhinelander Police Department wrote that "the unregulated sale of marijuana derivatives should not be allowed in those states currently prohibiting marijuana." But the ban attracted protests, and the City Council rescinded it at its November meeting.

So far, Wisconsin state legislators haven't attempted to ban or regulate Delta 8. Lindsey doesn't know of specific Wisconsin efforts, but he said he expects there will be a national wave of new state regulations on Delta 8 regulation in the coming year.

Nendick is wildly enthusiastic about the venture. "It's going to blow people away," he said. He reels off ideas for products.

"We've got a freeze-dry machine," he said, "so we're going to make our own (Delta 8) Pop Rocks, and then we're going to stuff them inside of a lollipop so when people bite into them, the Pop Rocks set off. ... There are things that are, I don't want to say Willy Wonka, but I want to say Wonkaesque." 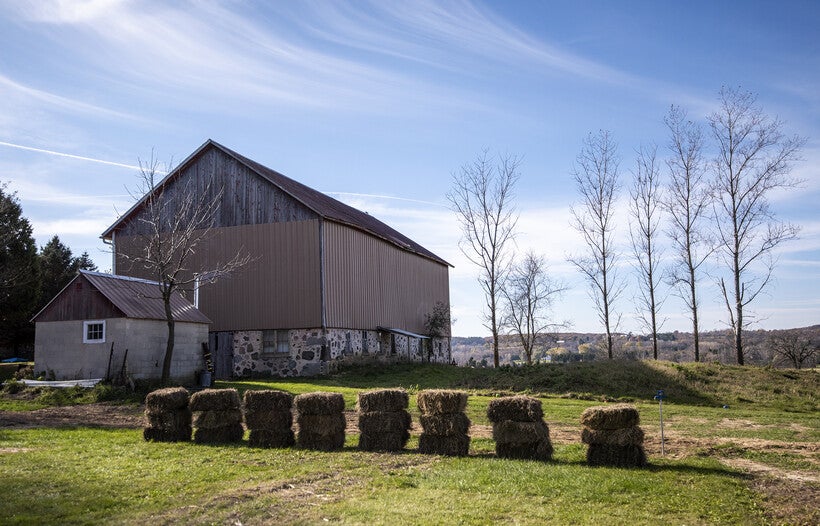 Thran is more circumspect. He's most excited, he said, about future scientific research into applications for so-called minor cannabinoids, what he calls "minors," which are being studied for their pain-relieving properties.

"It's really a game of the minors for us," Thran said. "And we feel the rest of the world's interested. It's figuring out what they are, No. 1. Concentrate them — legally, of course — and see how they benefit the human body."