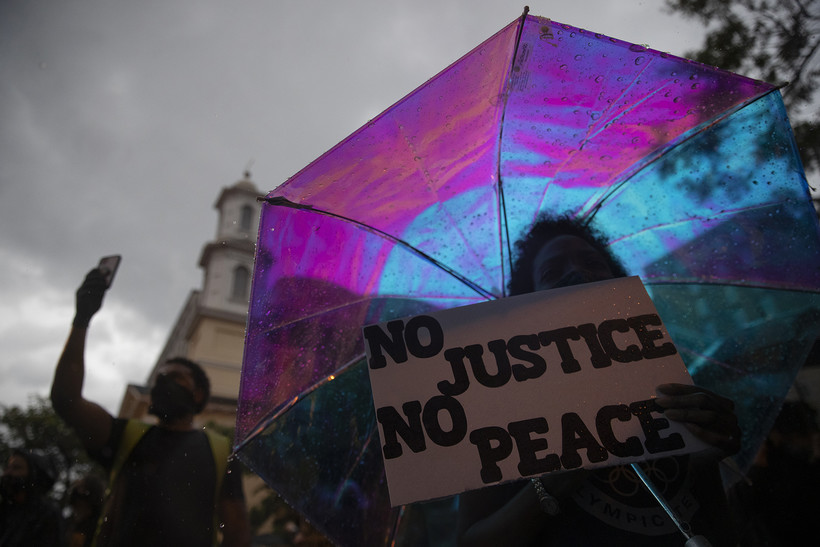 A woman holds a sign that reads "No Justice No Peace" under an umbrella in the rain as demonstrators protest, Friday, June 5, 2020, near the White House in Washington, over the death of George Floyd, a black man who was in police custody in Minneapolis. Floyd died after being restrained by Minneapolis police officers. Carolyn Kaster/AP Photo

Despite warnings of severe weather throughout Wisconsin, protests were planned across the state Tuesday in support of the Black Lives Matter movement.

In Milwaukee, protesters planned to meet at 3 p.m. at Humboldt Park — the site for many of the protests that have taken place in the city — for a march. The route has yet to be announced for safety reasons, according to organizers.

Another march was set to begin at 3 p.m. on the corner of 10th and Milwaukee avenues, with the goal to end at Milwaukee City Hall. Along the way, protesters planned to stop at Da Crusher statue to take a knee to honor black people killed by police, and at the Growing South Milwaukee community garden to "reflect on personal growth to seed love and positive energy for a hate free future."

About 200 Gather For Wauwatosa March

About 200 protesters assembled in Wauwatosa at 5:30 p.m. for a march. Beginning at the Kohl's on 124th Street and North Avenue, the march planned to end at the Wauwatosa Police Station for speeches. 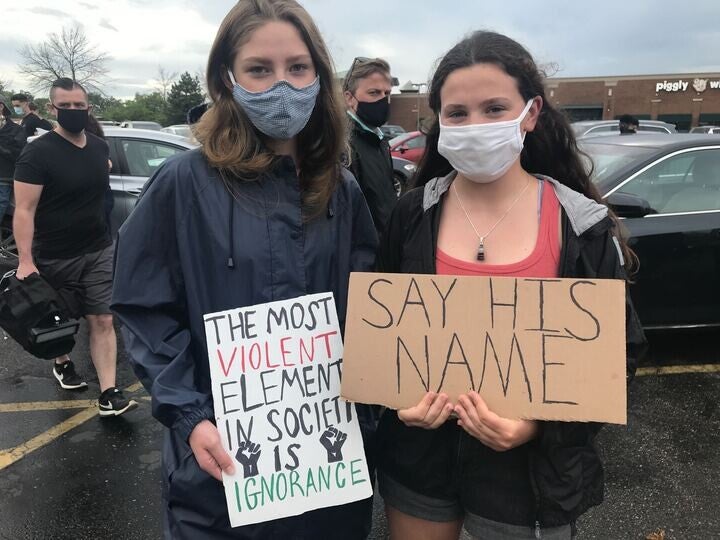 Maddie and Lauren, both 16 and going to be high school juniors in the fall, attended the Wauwatosa march on Tuesday evening, June 9, 2020. Madeline Fox/WPR

Despite ominous storm clouds overhead, the march drew a wide range of people eager to be a part of the demonstration.

Among the marchers were Maddie and Lauren, two 16 year olds who plan to be high school juniors in the fall. They said this was important to them.

"We need to support the movement," Laura said. "It's important to come out and support. You can't stay silent about this."

The teens said attending the march is a way to be engaged.

"Because we can't vote, this is our way of getting our voice out," Laura said. 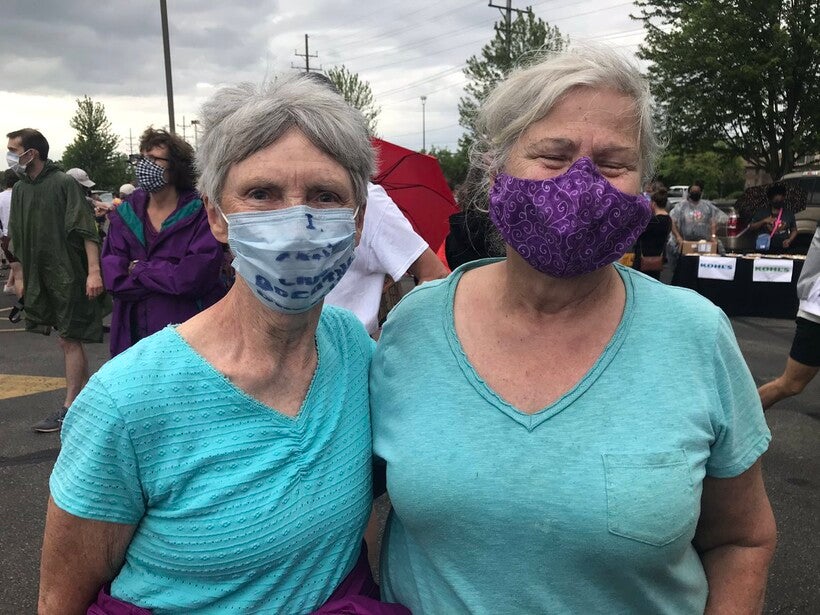 Margie Pecus, 80, said she was strongly motivated to attend the march.

"I'm really tired of just tolerating and putting up with what's going on in our world as far as inequality and prejudice and racism and white privilege. I'm just tired of it, and I need to put my a-- on the line now," she said.

"it's so important that people stand up. I can say things on Facebook or to people I know, but I'm really happy to have the opportunity to be out here in front. Because we understand, we see the people and we have to stand with them," said Margaret Ward, who is 73 years old.

Ward said that she was thrilled by who is attending these demonstrations.

"The other thing I think is very exciting is to look around and see how young everyone is here. That, to me, is so heartening, because for so many years, there haven't been young people. And Margie and I have both been involved in many, many things, for many, many years, and a lot of times it was people that looked like us," she said.

Another protester, was a 25-year-old woman named Vanessa, who lives in Oak Creek but works in Wauwatosa. She held a sign that said "Say His Name, George Floyd" on one side and on the other says "In the Age of Information, Ignorance Is a Choice."

"All the information is so accessible now that if you want to learn about it, you really can, so if you’re not learning about it, that's just your own choice," she said. "I hear a lot of people turning this super political, and I'm not very political myself. I think it's more than just politics, it's human rights, it's civil rights."

Vaun Mayes is an organizer from Milwaukee and has headed a lot of the recent protests, as well as organizing against police brutality for years.

"Yes, we are in solidarity and we are upset about what we saw with George Floyd, but we have our own George Floyds here, and we need to galvanize this energy to address those."

As of Tuesday afternoon, there were no organized protest events scheduled in Madison, but for the last several days, people have gathered at the state Capitol in the evenings to protest racial injustice and police brutality.

On Tuesday afternoon, Urban Triage of Madison asked its members and the community to contact the Madison Metropolitan School District Board of Education to demand it end its contract with the Madison Police Department. Protesters confronted Board of Education President Gloria Reyes last week, primarily making the demand that police officers to be removed from public schools.

In her email, she wrote, "the complexities of these times have lasting and painful memories for our students and staff, and we must press harder to dismantle systems that perpetuate racism and create new structures, void of harmful inequities, and with the wellbeing of every student at the center."

Reyes said the school board would create a sub-committee of students, parents, teachers and other stakeholders to review the district's safety and security strategy — without police in schools.

Protesters across the state have called for similar policy changes including increased community control over policing, the removal of police officers from schools and more government money spent on supporting black communities.

WPR's Laurel White compiled a list of some of the prominent requests, and broke down who has the power to make the proposed changes.