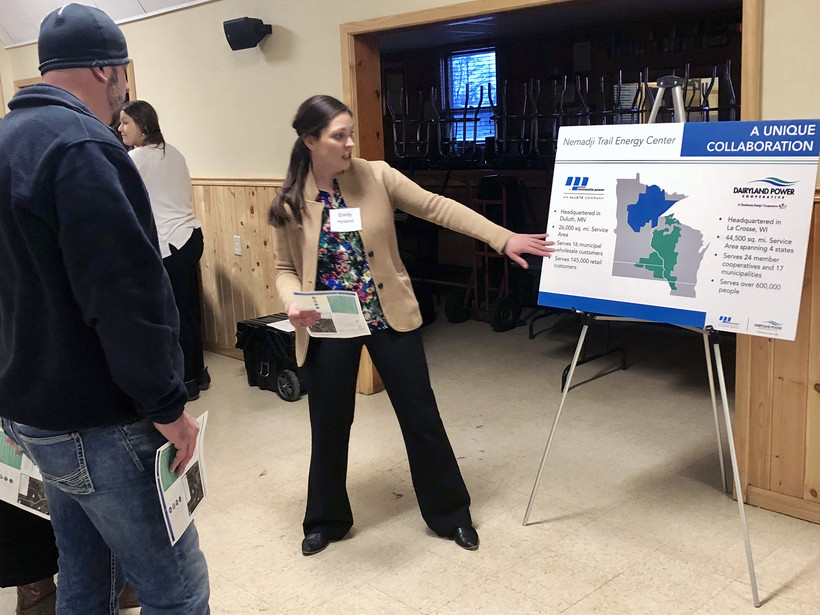 Emily Hyland talks with people about the proposed natural gas plant at an open house in Superior on Monday. Danielle Kaeding/WPR

La Crosse-based Dairyland Power Cooperative and Minnesota Power held an open house in Superior on Monday night about plans to build a $700 million natural gas facility along the Nemadji River. Utility representatives say they and their customers will split the cost of the project, which would supply power when they’re unable to draw from renewable sources like wind and solar.

Minnesota Power has set a goal to provide 44 percent of its power from renewable resources by 2025. Dairyland Power is hoping to reach a goal of 25 percent by 2025.

"Lots of things in play there on whether we’ll make it or not, but we’ve certainly made a lot of progress and that continues to be sort of our rough goal to get into that territory," said Rob Palmberg, vice president of strategic planning for Dairyland Power. "Then, we’ll see where that goes. These projects are good right now. We’re doing a lot in the renewable space, and we think they’re good for our membership."

The natural gas plant would produce between 525 to 550 megawatts of power. Minnesota regulators approved the proposed facility two weeks ago. Now, the utility providers hope to secure permits in Wisconsin.

Superior resident Randy Peterson was among 40 people who attended during the first hour of the open house to ask questions about the project. He said he’s trying to keep an open mind.

"It’s better than coal, granted. I can see that side of it, but it’s so close and right next to the watershed of the Nemadji River," he said. "I’m concerned about it."

The project has also raised concerns and opposition among industries and clean energy groups in Minnesota, including the North Star Chapter of the Sierra Club. Duluth representative Courtney Cochran said they’d like to stop the project in Wisconsin.

"They both talk about getting to a renewable future and taking a step towards natural gas is not the right step," said Cochran. "If we’re looking toward a renewable energy future, it’s adding another fossil fuel into the system."

Cochran said Minnesota Power and Dairyland haven’t demonstrated the project is needed. If built, she said they’ll put pressure on the utility providers to shut down their coal-fired facilities. Julie Pierce, vice president of strategy and planning with Minnesota Power, said they’re trying to transition to a clean energy future as fast as possible in a way that’s reliable and affordable for their roughly 145,000 customers.

"As we’ve been transforming our grid and bringing large coal-fired power plants offline, we need something that can come in and be flexible and responsive to when the energy needs are there and wind and solar and hydro are not," she said.

Supporters of the plant, which include Superior Mayor Jim Paine, say it represents a $1 billion investment in the region over 20 years, and will generate $1 million in local tax revenues each year. The facility is expected to create 260 construction jobs and 25 full-time positions.

The two utility providers expect to begin the permitting process with the Public Service Commission of Wisconsin and other agencies early next year and hope construction would begin in 2020. Pending regulatory approvals, the plant is expected to be in service by 2025.