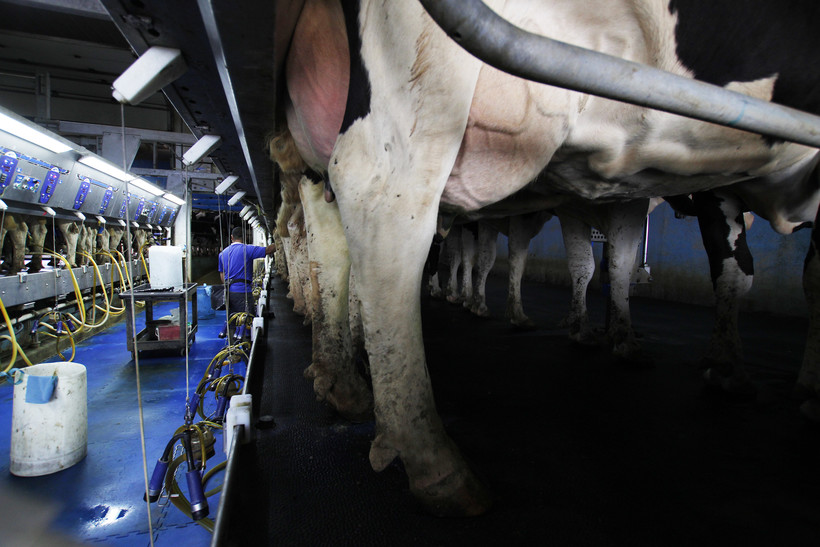 As the coronavirus pandemic interrupts the food supply chain, some dairy industry groups are calling on the federal government to help scale back milk production.

Earlier this month, the National Milk Producers Federation and the International Dairy Foods Association proposed a voluntary supply reduction program for dairy farmers as part of a larger plan to respond to the impacts of the pandemic.

The proposed program, called Market Balancing Assistance, would pay farmers a premium on their milk if they cut their production by 10 percent.

In a proposal sent to the U.S. Department of Agriculture, the groups representing dairy farmers and processors suggested an additional $3 per hundredweight, or 100 pounds of milk, should continue through September if milk prices stay below $16 per hundredweight.

Many dairy industry groups have traditionally been against efforts to control the supply of milk as a way to keep prices at a profitable level.

But Mark Stephenson, director of dairy policy analysis at the University of Wisconsin-Madison, said these are not ordinary circumstances.

"There is no option right now except to reduce milk production. We can't do this with simply lower market prices," Stephenson said.

He said the dairy industry needs a way to entice all farms to produce less, or painfully low prices will force farms out of business all together.

The Wisconsin Farmers Union has been pushing for milk supply management practices since 2018, after a record number of the state’s dairy farms went out of business because of low prices.

"There has been a growing acknowledgement in the dairy industry for some time that there's a need for a permanent mechanism for balancing milk supply and demand," O’Connor said. "The recent research that we've seen showing just how effective a permanent supply management would be is very promising. And especially if it applies to all dairy farmers nationwide."

But Stephenson said the system that's been proposed as a response to COVID-19 is not something that would be continued long term.

"This is really taking taxpayer money and just providing support for dairy farms. I don't think that we would do that in ordinary times," Stephenson said.

And not all dairy organizations support the idea of temporary supply management during the pandemic.

Aaron Stauffacher is associate director of government affairs at Edge, a dairy farmer cooperative based in Green Bay. His organization thinks dairy processors should be the ones to help farmers decide how much milk to produce.

"This is really hitting different aspects of our food and dairy demands differently," Stauffacher said. "Players need to be able to facilitate a more targeted approach to their own supply chain rather than just kind of encompass the entire industry in kind of a broad overarching program."

Stauffacher said the USDA should instead focus on providing direct relief payments to farmers to make up for market loss this spring.

Edge supports a proposal by the Minnesota Milk Producers Association for direct payments to farmers from the USDA. The program would pay $9 for every hundredweight of milk produced in March in one lump sum payment.

Stauffacher said his cooperative also supports partially reimbursing farms for milk they were forced to dump because of lost demand.

He said several Edge members have been part of a wave of Wisconsin farms who have been forced to dispose of excess milk. Stauffacher said his group doesn't know the exact number of farms who have had to dump milk but affected producers are encouraged to report to the state Department of Agriculture, Trade and Consumer Protection.

Both Edge and the Wisconsin Farmers Union are also asking the USDA to purchase dairy products through federal food assistance programs as a more immediate way to deal with the oversupply caused by lost demand from the food service industry.

Earlier this month, both organizations joined a coalition of Wisconsin dairy groups in calling on the USDA for action. The letter asked the department to purchase nonfat dry milk, butter and cheese with funding from the CARES Act, a federal coronavirus aid package approved in March.