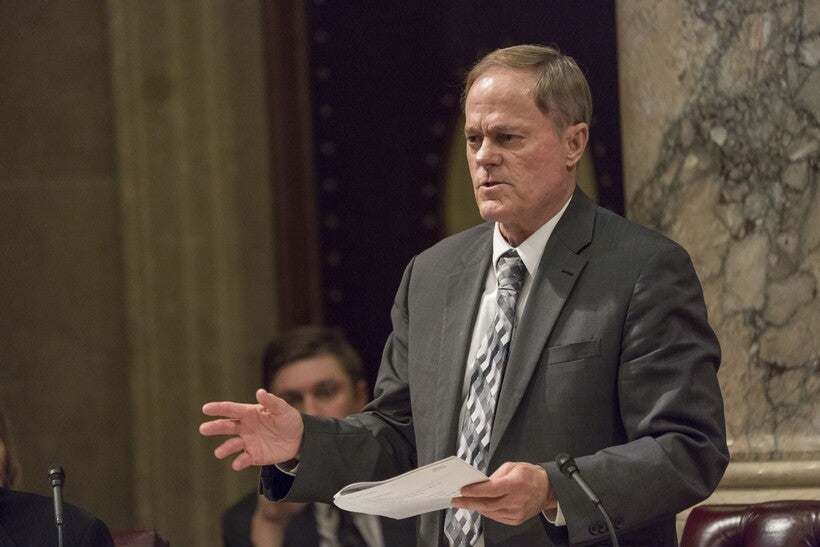 State Sen. Rob Cowles Says He Plans To Campaign For Re-Election In 2020
By Keegan Kyle
Share:

On Monday, he spoke about the bills — which range from child exposure to lead, Lyme disease from tick bites, government transparency and evidence in sexual assault cases — with WPR's "The Morning Show" host Kate Archer Kent.

Cowles, who has represented northeastern Wisconsin for more than three decades, also addressed how election districts are drawn and said he plans to campaign for re-election next year.

Kate Archer Kent: This summer you announced two bills that would require lead testing for drinking water at schools, and other places where children congregate like day cares and summer camps. Wisconsin has more than 2,000 public schools. Why is testing needed across the board?

Rob Cowles: Testing is needed because the data shows very clearly that lead affects young kids 6 and under. Its very deleterious. It's bad for any of us, but it's particularly bad for kids.

KAK: Have we seen enough problems or concerns in your district to warrant expanding tests statewide?

RC: We have not had people reach out to us directly. There is no required test and no data on how many schools have actually dealt with this and taken bad lead lines off. We don't have good data. We think that some schools have dealt with it. But I'm also fairly sure that a whole bunch of schools have not dealt with it. So this bill is heavily targeted to protect those most vulnerable kids. If we can get this thing signed, I think parents will feel much better about sending their kids off because this whole issue of lead has exploded in the public arena in recent years.

KAK: Do you know how much it would cost to do testing straight across the board and take stock of what's going on in our state?

RC: We believe the tests are about $50 per test. It could be a little bit less. The way the bill’s drafted right now, let's say a water fountain was 15 parts per billion, which is a federal threshold that is recommended to not use (the water) if it's that level. (The bill) wouldn't require them to rebuild. If some of the fountains, bubblers in Wisconsin are OK, those would continue obviously, but the ones that are the 15 parts per billion, those would have to be taken offline.

KAK: In May, you introduced Senate Bill 212, which would waive annual admission fees to state parks for parents of school children enrolled in fourth grade. Why do you support this waiver considering the DNR estimates it would cost a quarter of a million dollars in lost revenue from park admissions?

RC: We replace that (money) with general purpose revenue. The federal government does this, Kate. It waives it for this grade. And in talking with parents that have kids at this age and they felt that this would be a good way to incentivize young people to take an interest in our parks. The parks are a special interest of mine. I love our state parks and I go to several of them every month. And I want to see the kids of our state enjoy our state parks.

KAK: You also introduced a bill this year that would require Wisconsin's tax collection agency to create a website showing how much taxes are collected and how that money is spent. Why do you think there is a need for this website?

I’ve been chairman of the Audit Committee for a while and we find all sorts of interesting things when we dig deep into individual programs and issues. But if an individual person wants to find out exactly how money is spent on different programs, it's very difficult to access that information. This would be just continuing what I hope would be accountability in state government so people can find out how much is spent in some place and then ask questions.

KAK: How is this similar or different from Openbook Wisconsin, the website former Gov. Scott Walker launched five years ago? Now that website has Gov. Tony Evers’ signature on the front page. Does that website not provide enough detail?

RC: That's right. It doesn't provide enough detail to actually make it accessible for people. We've looked at it, and it's just too hard to navigate that website. So we need to do it a little bit better now. We've been working with the state Department of Revenue on this. I'm reasonably optimistic that this will happen eventually.

KAK: Let's look at sexual assault kits and the Senate bill that would codify how the state stores evidence in sexual assault cases. Wisconsin currently holds sexual assault kits for up to a decade just in case victims want to have that evidence to test for DNA. Another bill this year from your colleague, Sen. Andre Jacque, proposes extending the storage limit to 50 years. What do you think of that proposal?

RC: I have not really looked at that proposal. Right now, we're just trying to get a hearing on the first proposal, which is very much bipartisan.

(The bill would allow) better surveillance of where the kits are, how they're reported to the state at every step of the process, so we don't lose track of a kit that could end up solving a crime. Hopefully that bill gets moving. It's possible that 10 years is not adequate, and through the public testimony we extend it, but at this point we're just trying to get a hearing on the concept. We've been working with a bipartisan coalition of legislators and the attorney general to make this happen. We've all seen where a (sexual assault) kit that goes back a few years is suddenly looked at and it's helpful in solving a crime. We want to make sure we can solve more crimes using the (sexual assault) kits.

KAK: You introduced a package of bills this year that's aimed at curbing Lyme disease from tick bites, and the DNR would take on a bigger role in addressing it. State parks and forests would be required to sell insect repellents. Why should the DNR have more of a role here in preventing Lyme disease?

RC: People typically when they're outdoors, there's a good chance that they may be walking in our state parks, so we need to show an example. Some of the state parks are selling bug spray. But to the best of my knowledge, they're not putting posters up that educate people on what can happen if you don't take reasonable precautions to avoid tick bites. This package of bills is a reasonable response to what I've experienced in knowing a whole bunch of people that have been infected, some of whom have had some severe problems.

As somebody that loves our parks, I want to make sure that we're not overreacting here. We also plan on a task force with the most knowledgeable people in the state that know about Lyme disease so they can report back to the Legislature. We'd also create a position, (an epidemiologist). But this whole issue of Lyme disease has not slowed down. We're getting about 3,000 plus episodes of people diagnosed a year and some of those people have been severely damaged.

KAK: What is your take on the gerrymandering debate here in Wisconsin. Do you think that the current voting laws are fair?

RC: I really do think they are. I can tell you that the seat that I represent has been changed a couple of times. If there is something unfair, it’s certainly not benefited me. It's made my district more sprawling and more difficult to reach. I like to meet people and network with them to the extent I can. Nothing is going to happen in this Legislature. The next map that comes up after the next election would have to be negotiated with Gov. Evers and whoever's in the Legislature at that time. So, I don't see these seats changing a lot.

KAK: You've been in office since 1987, so you're one of the state Senate's longest serving members. Your current term expires next year. Are you running for another four years in office?

RC: Yes, I'm planning on giving it another go. I don't have any health issues. I’m still quite engaged, more engaged than ever on a variety of issues. And I enjoy serving the people of this area.

KAK: You co-chair the Legislature's Audit Committee, which gets to review completed audits and decides new audits. The most recent one looked at the state Veterans Home at King. What did you learn from the audit and how we go about them? 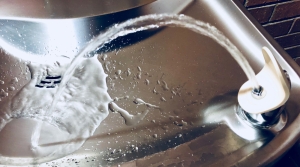 State Sen. Rob Cowles, R-Green Bay, has authored or sponsored more than 30 bills this year. We discuss several aimed at addressing lead pipes in schools, Lyme disease from tick bites and a variety of other issues.