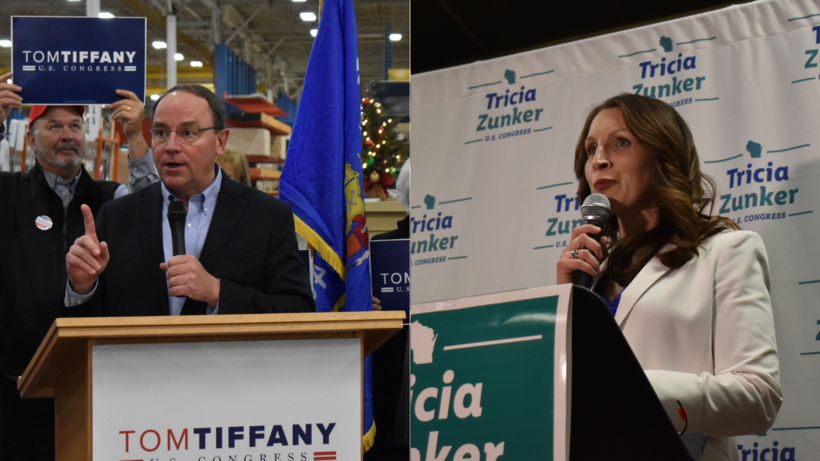 Republican Tom Tiffany In A Rematch With Democrat Tricia Zunker Months After May Special Election
By Rob Mentzer
Share:

The candidates began their campaigns in the fall of 2019, and even in the early days of the pandemic, many of their messages focused on other issues. That's no longer the case as the two face each other again Nov. 3. The district, which encompasses central and northern Wisconsin, includes some areas of the state hit hardest by the pandemic in recent weeks. In a televised debate and in other media appearances, questions for the candidates have centered on the pandemic's effect on Wisconsin.

In the Oct. 16 debate on WJFW-TV, Tiffany did not directly answer a question about whether he supports Wisconsin's statewide mask mandate, which Republicans have sued to end.

"The virus is real," Tiffany said. "We all need to take it seriously and do everything we can to defeat the coronavirus pandemic."

Zunker criticized Tiffany for holding an indoor political event in October where masks and social distancing were not required. During the debate, Tiffany said he had removed his mask to speak to the group at the time the photographs shared on social media were taken.

In an appearance Friday on WPR's "The Morning Show," Tiffany said his message on COVID-19 was "wash your hands, stay home when you're sick, and wear a mask when it's required in public."

Zunker, whose uncle died from COVID-19 in August in Wausau, said in the WJFW-TV debate she supports the mask mandate and other measures to fight the pandemic.

"This is not a Democrat issue or a Republican issue," Zunker said. "This is an American health and safety issue. We need to come together, and we need to wear masks to reduce the spread of contagion."

Wausau, the largest city in the 7th Congressional District, has been among the hardest-hit metro areas in the country in recent weeks. In early October, Aspirus Wausau Hospital opened an additional COVID-19 ward, and staff at the overwhelmed hospital have pleaded for members of the public to take public health precautions.

Zunker, who is the Wausau School Board president, was targeted by conservative activists for a recall in the wake of the school board's decision to start its fall semester virtually as a COVID-19 precaution. One of those who participated in online discussions of the recall was Marathon County Clerk Kim Trueblood, who was the subject of an ethics investigation after she posted that she would "do anything behind the scenes" to help the recall efforts. An investigation report released this week found she had not committed misconduct in office, but did find "basis for possible censure" for violation of the county's ethics policy.

Among Tiffany's first actions in Congress was to introduce a bill that would have blocked federal funding for schools that did not reopen in person in September. In his WPR appearance Friday, he said schools and businesses "need to reopen safely and responsibly."

"We can't continue these shutdowns the way they've been going, because the cure is going to end up being worse than the disease," Tiffany said.

Tiffany opposes the House's $3 trillion coronavirus relief bill, and said he supports a more targeted Republican alternative. His votes in his short time in Congress have placed him among the most conservative members of the House, according to DW-NOMINATE, which tracks members of Congress by ideology. His votes were more conservative than 92 percent of House members, including 83 percent of Republicans.

In part, that's because he voted in the minority on a number of bills that passed with bipartisan support in the Democratically controlled House. He voted against:

In the WJFW-TV debate, Tiffany said he denounces "any group that foments unrest and violence in our country," but derided the QAnon-condemning bill as a waste of time in the House.