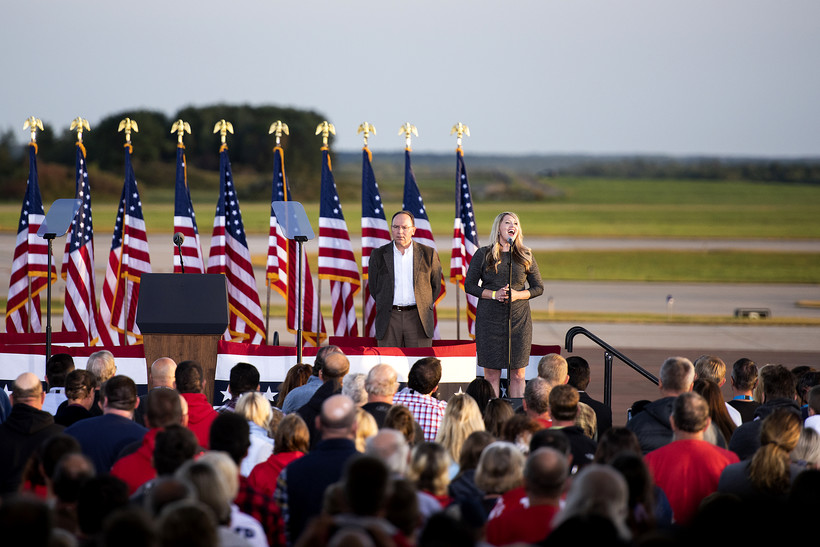 U.S. Rep. Tom Tiffany stands onstage during the singing of the national anthem at a campaign rally for President Donald Trump, Sept. 17, 2020, in Mosinee. Angela Major/WPR

U.S. Rep. Tom Tiffany, R-Wis., held a campaign event indoors Monday, without a mask requirement or social distancing, as new COVID-19 infections spiked and hospitals in Tiffany's district warned they could be overrun.

In photos from the event posted Monday evening by Tiffany's campaign Twitter account, Tiffany and Sheriff Mark Lamb, of Pinal County in Arizona, appear in a conference room with people seated closely around tables and closed windows behind them.

Guidelines from the Centers for Disease Control and Prevention state that "large in-person gatherings where it is difficult for individuals to remain spaced at least 6 feet apart and attendees travel from outside the local area" present the highest risk of spreading the coronavirus, and numerous studies have shown that indoor settings are more risky than outdoors because a relative lack of air circulation inside allows the virus to accumulate.

The Tiffany campaign didn't respond to a request for comment on Tuesday morning and its online posts didn't say how many people were at the event nor whether any safety measures were in place. Attendees appeared to be violating the state's indoor mask mandate, and health officials have called on Wisconsinites to stay home and limit all non-essential gatherings.

Very excited to have @sherifflamb1 from Pinal County Arizona in Wisconsin this week to share his expertise and experience on the issues of border security, police funding, drug and human trafficking, and substance abuse policies. pic.twitter.com/SdyKxPsB2L

Tiffany's Democratic opponent in the 7th Congressional District race, Wausau School Board President Tricia Zunker, called the event "completely reckless" and said it calls into question the safety of an in-person debate the candidates will hold on Oct. 16 at the studios of WJFW-TV, a Rhinelander TV station.

"Now my safety and my family's safety is a serious concern," Zunker wrote on social media Monday evening.

In an interview Tuesday, Zunker said she had since spoken with WJFW-TV's station manager, who agreed to add plexiglass barriers to the set of the debate in addition to measures aimed at separating the candidates, moderator and technical staff.

Lamb, like Tiffany, is an outspoken supporter of President Donald Trump. In May, he said he wouldn't enforce the Arizona governor's stay-at-home order aimed at slowing the spread of COVID-19 there. In June, he tested positive for the disease, and said he likely contracted it at a campaign event. He told Arizona media then that he would "do things differently," but also said he didn't regret his opposition to the stay-at-home order.

Wisconsin is experiencing its most serious spike in new coronavirus infections, hospitalizations and deaths from the disease since the pandemic began. Its outbreak is among the worst in the nation. On Monday, hospital leaders in Wausau, the most populous city in the 7th Congressional District, warned that local growth in hospitalizations has been "exponential." Hospitals there are converting parts of their facilities in order to treat COVID patients, and in some cases transferring patients elsewhere when their wards are full.

More than 1,300 Wisconsinites have died from the disease.

Tiffany, who previously spoke at Trump's outdoor campaign rally in Mosinee on Sept. 17, isn't the only Wisconsin Republican to post social media photos of himself engaging in high-risk campaign events. Derrick Van Orden, a Republican from Hager City who is challenging U.S. Rep. Ron Kind in Wisconsin's 3rd Congressional District, has posted numerous photos of indoor, unmasked events, including one on Friday after Trump was hospitalized with the disease.

Zunker said she has a personal connection to the way the disease can devastate families. Her uncle died from COVID-19 in August in Wausau.

"We thought we had 20 more years with him," Zunker said. "And he died alone, on a ventilator. It's horrifying."

Related Links:
In-Person Campaigning Can Be Dangerous In a Pandemic. Wisconsin Politicians Are Finding Ways To Do it Anyway.