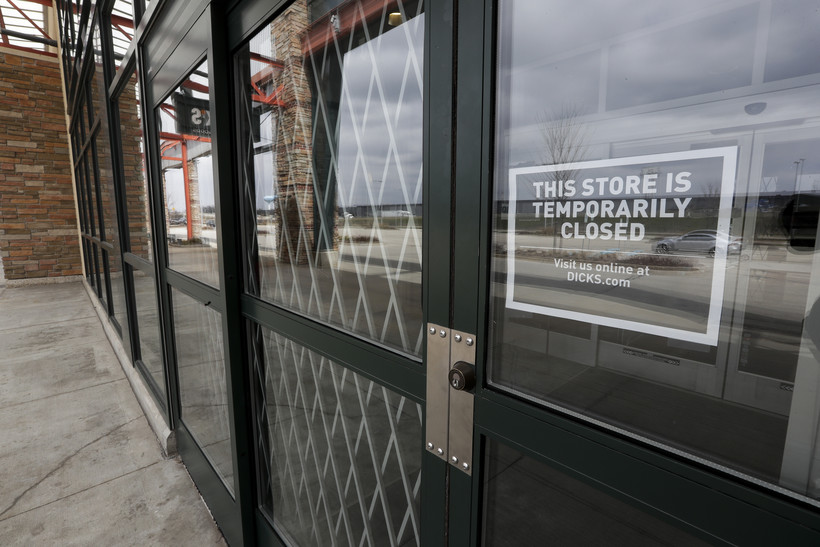 A sign is seen on the door outside a Dick's Sporting Goods location closed because of the COVID-19 pandemic on Wednesday April 15, 2020, in Wauwatosa, Wisconsin. Morry Gash/AP Photo

COVID-19 Brought Wisconsin’s Parties Together. Just Not For Long

When a crowd of potentially thousands gathers Friday at the state Capitol to protest Democratic Gov. Tony Evers' stay-at-home order, it will violate public health advice but reaffirm the partisanship that's become a mainstay of Wisconsin life.

And yet, for a fleeting moment, things seemed like they might be different in the era of COVID-19. Bipartisan even.

Today, the state's business lobby is at odds with Evers overs his decision to extend his "Safer at Home" order, but a little more than a month ago, on March 18, Evers was briefing Wisconsin Manufacturers & Commerce (WMC) members on a conference call. It was, at the very least, cordial.

"I know you're a very busy man with what's going on," said WMC President and CEO Kurt Bauer. "We appreciate your tireless leadership."

Around that same time, on March 25, Assembly Speaker Robin Vos, R-Rochester — Evers' adversary in the Legislature — was asked whether lawmakers would roll back the governor's emergency powers.

"I think we will look back and have questions about how all this went," Vos said at the time. "But this is not the appropriate time to question it."

Of course, there was an enormous fight between Wisconsin Republicans and Democrats over whether to postpone Wisconsin's April 7 election.

But lawmakers set that aside, and just last week, the Wisconsin Legislature held its first ever virtual session, passing a coronavirus relief bill 97-2 in the Assembly and 32-0 in the Senate.

"Wisconsinites have endured great sacrifice," said Senate Majority Leader Scott Fitzgerald, R-Juneau on April 15. "And the measures that we have taken and that the governor has taken so far are working."

But already, change was happening in the world of Republican politics. And Fitzgerald was about to find out firsthand.

It wasn't just lawmakers who supported the COVID-19 bill that Evers signed into law almost immediately. A coalition of conservative groups, including Americans for Prosperity-Wisconsin, the Wisconsin Institute for Law and Liberty and the MacIver Institute, all praised its passage.

But conservative talk radio host Mark Belling of WISN-AM did not. And on the day the Senate passed the bill, he brought Fitzgerald on his show to let him know about it.

"This is, I think, one of the lower moments we have had in the state of Wisconsin," Belling told Fitzgerald. "I think we are seeing peoples' true colors under COVID-19. Conservative groups sell themselves out and I think Republicans in the state Legislature, so terrified of the media that they are, (are) making a situation worse."

Belling had issues with the new law, including the way it protects health care providers from lawsuits related to COVID-19.

But one of his biggest issues was that Republicans didn't force Evers to roll back some more stay-at-home restrictions. He thought they'd caved to the governor. In Belling's words, they were "buffaloed."

"This level of frustration that I'm trying to communicate to you is real," Belling told Fitzgerald. "And people don't know who to turn to because on the one hand they know Evers isn't going to listen to them, but it is extremely apparent to me that conservative think tanks and Republican legislators are not listening."

Eventually, Fitzgerald shot back and laid some of the blame elsewhere.

"The president of the United States is on TV every day," Fitzgerald said, "continuing with the mantra that's coming out of the East Coast which is, 'Oh my god, the world is coming to an end.' But we're sitting out here in the flyover states saying nothing is happening here."

But Belling kept at it, and kept Fitzgerald on the line for about a half-hour before letting him go.

The next day, Belling was criticizing lawmakers again. He read the names of every lawmaker who met virtually to vote on the COVID-19 bill.

"If you were too lazy to come in or you're too afraid of the coronavirus to come in — whichever one it was — furlough yourself," Belling said on April 16. "I'm dead serious about this."

Assembly Majority Leader Jim Steineke, R-Kaukauna, tweeted later that day that the decision to meet virtually in the Assembly was his.

By this time, a handful of protests against stay-at-home orders had taken place around the country.

Trump has seemingly encouraged them at times even as he's overseen the federal effort to get people to stay home to slow the spread of COVID-19.

Trump's message was dire just a few weeks ago, when he warned the public that dark days were ahead for the country.

"I want every American to be prepared for the hard days that lie ahead," Trump said on March 31. "We're going to go through a very tough two weeks."

By last week — on April 16 — he was talking about lifting restrictions.

"We're opening up our country," Trump said. "And we have to do that. America wants to be open."

On April 17, Trump sent three tweets in all caps that called on people to "LIBERATE" Minnesota, Michigan and Virginia, three states with Democratic governors who had issued stay-at-home orders.

But when Georgia Gov. Brian Kemp — a Trump-endorsed Republican — moved to reopen his state, Trump said this week that it was too soon.

"Would I do that? No. I'd keep them a little longer. I want to protect people's lives," Trump said. "I'm going to let him make his decision, but I told him I totally disagree."

In Wisconsin, Evers pointed to White House guidelines when he announced another month-long stay-at-home order and a plan to very gradually reopen the state.

Wisconsin Republicans say a goal of 12,000 coronavirus tests per day called for in Evers' reopening plan is too aggressive, and the stay-at-home order too broad. They've asked the state Supreme Court to overturn it.

'We Need To Be The Rosa Parks Here'

But outside the Legislature, opponents of stay at home are not waiting for the legal battle to play out and have planned a protest of potentially thousands at the Wisconsin Capitol.

Organizers have stressed that it's not partisan, but the event has drawn interest from Republicans in high places.

Stephen Moore, a founder of the Club for Growth and a Trump economic advisor, said in a YouTube chat last week that he was helping to organize the Wisconsin protest.

"We have one big donor in Wisconsin — I’m not going to mention his name — and I told him about this," Moore said. "He said 'Steve, I promise I will pay the bail and legal fees for anyone who gets arrested.'"

Moore said it was an important time for members of the public to exercise their right of assembly, which he predicted would become more frequent as long as the government kept the economy shut down.

"This is a great time, gentlemen and ladies, for civil disobedience," Moore said. "We need to be the Rosa Parks."

While Friday's event is in direct violation of Wisconsin's public health order — and was denied a permit for that reason — Evers has said he does not expect Capitol police to be enforcing social distancing. And Madison Mayor Satya Rhodes-Conway told The New York Times that the city's officers would not force protesters to disperse.

Up to 16,000 said on Facebook that they planned to attend Friday's rally, which is a big group at a time when crowds are officially banned.

But a poll released by the Associated Press this week found that just 12 percent of Americans said stay-at-home restrictions go too far.

On Friday, the silent majority will be staying at home.