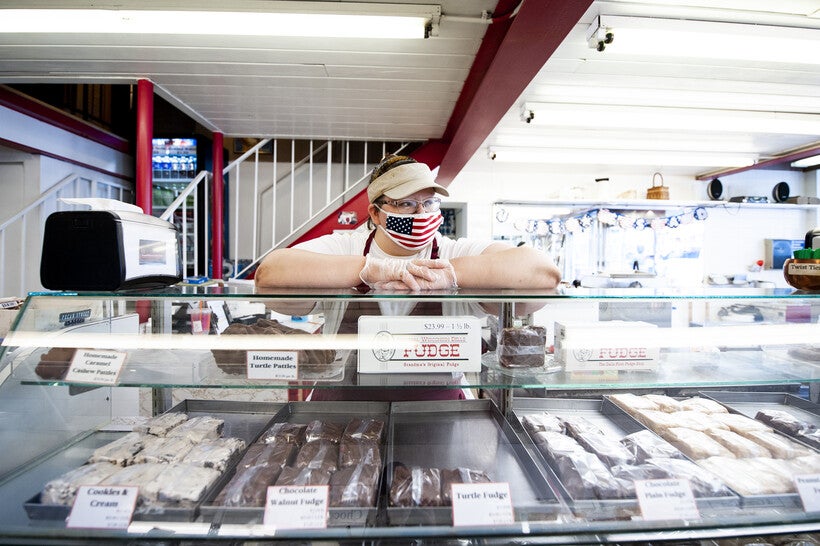 State Has Drawn In More Money Than Last Year So Far, Mostly In Rural Areas
By Danielle Kaeding
Share:

At least for now, consumer spending in Wisconsin is bucking projections that the COVID-19 crisis could cause counties to experience significant losses in sales tax revenues this year.

State data shows counties overall have drawn in $18.6 million more than the same time last year, although not all counties are enjoying a windfall. Some rural counties and vacations spots are drawing in more revenues from sales taxes compared to last year, while some urban areas are seeing a dip in returns.

Earlier this year, a research division of the Wisconsin Counties Association projected counties could lose $68 million in sales tax revenues, or about 15 percent, of the $462 million they expected to earn this year. The forecast was based on a number of factors, including unemployment data, retail sales and a $870 million drop in state tax collections.

Federal relief funding in the form of $1,200 stimulus checks and $600 weekly supplemental unemployment benefits likely played a huge role in spending, according to Dale Knapp, director of the association's research firm Forward Analytics.

"That seems to have really held up consumer spending through June, at least, maybe through July even," said Knapp. "And so the sales tax numbers that have come in have been much better than we originally expected."

Earnings in Dane County have dropped 3.7 percent with a loss of $1.7 million, while Milwaukee County revenues are down $1.6 million or 2.6 percent, compared to data from the same time last year.

"The consumers in those counties, because of (the) pandemic, aren't shopping nearly as much at the regional shopping places," said Knapp. "They're keeping it ... closer to home, or they're shopping online more."

Movement in rural counties was up 19 percent this summer compared to last year, according to Secretary-designee Sara Meaney with the Wisconsin Department of Tourism. The agency is trying to gain insights on travel patterns through mobile location data that's tracked by the company Arrivalist.

Meaney thinks the increased movement in rural areas is linked to people who want to take part in socially distanced activities and outdoor recreation.

Sales tax revenues in rural northern Wisconsin tourist areas like Bayfield, Oneida and Vilas counties are roughly 6 to 10 percent higher compared to the same time last year. Those counties had issued travel advisories urging seasonal and second homeowners not to visit, due to their high population of older residents who are more likely to experience complications if they contract the virus.

Bayfield County Tourism Director Mary Motiff said the county was in good shape prior to the pandemic, but revenues were down substantially during the Safer at Home order. Spending began to creep up in June and surged in July.

"After a couple months, people were tired of being secluded and wanted to get out and about," said Motiff.

Motiff said they haven't been actively promoting travel to region due to the pandemic. She also thinks people were drawn to the outdoors, noting half of the county is public land.

"It is a fine line. We do rely on people coming here and spending money in our community," said Motiff. "For our economies, tourism is one of our biggest industries."

Bayfield County, like the rest of the state, has seen COVID-19 cases surge in the last month from 53 to 120 cases. In that same period, sales tax revenues were up 32 percent compared to the same month last year.

Other tourist draws like Sauk County, which includes the Wisconsin Dells area, have seen revenues drop 7.6 percent with a loss of around $530,000 compared to the same time last year. Dave Bretl, interim county administrator, said the county board passed a budget amendment earlier this year that reduced their projected $9.8 million in sales tax earnings by $2 million due to the pandemic.

Bretl said the county didn't have to lay off any workers to offset the shortfall, noting some positions were left vacant or purchases were deferred. While sales tax revenue projections have improved, he acknowledged the year is not yet over. A growing number of COVID-19 cases statewide could impact future earnings if restrictions are put in place to keep the virus from spreading.

"That not only phone funds county government, but that represents customers and restaurants and water parks and grocery stores and coffee shops and all those places," said Bretl. "As much as it's revenue to Sauk County government, it's also the livelihood of a lot of people."