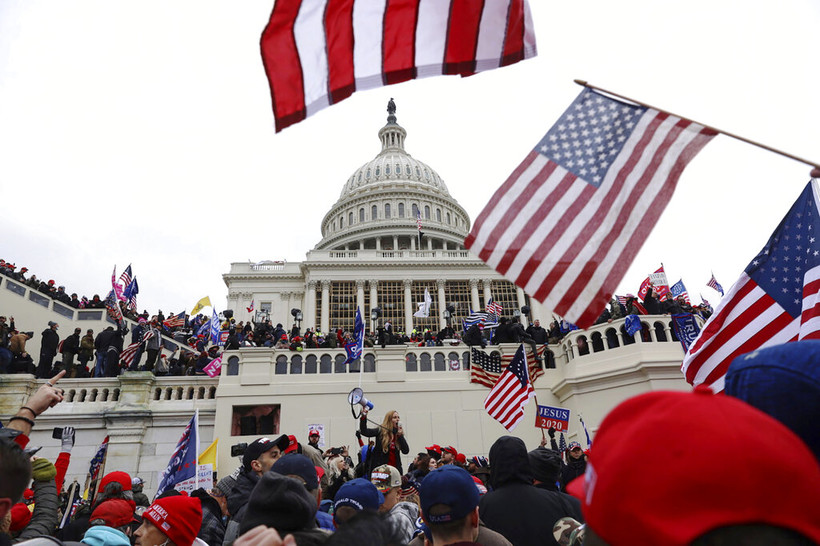 Posts Urged Supporters To 'Prepare For War,' Plan For 'Temporary Violence' Leading Up To Jan. 6 Riot
By Rich Kremer
Share:

In the weeks leading up to the violent siege of the U.S. Capitol on Jan. 6, some county Republican parties in Wisconsin shared online rhetoric urging members to "prepare for war" and plan for "temporary violence" by stocking up on food, water and medications.

On Dec. 14, the Facebook page operated by the Shawano County Republican Party posted a statement, purportedly from President Donald Trump's attorney Jenna Ellis outlining the process for how Congress could overturn the certification of electoral votes for President-elect Joe Biden.

Before quoting the alleged Ellis statement, the post shared by the Shawano GOP described what was coming on Jan. 6 as potentially "biblical."

Shawano County Republican Party Chair Richard Kucksdorf — who was among the plaintiffs in a failed lawsuit to overturn President-elect Joe Biden's victories in Wisconsin, Pennsylvania, Michigan, Georgia and Arizona — told WPR he doesn't know who posted the statement and suggests it may have come from another Facebook group. An identical post to the one from the Shawano County GOP was shared by the Republican Party of Stueben County Indiana a day later on Dec. 15.

Members of the Shawano County GOP were at the "Stop the Steal" rally in Washington Jan. 6 and posted a picture of a marching crowd with the comment "Heading to Congress."

Kucksdorf said he wasn't at the rally and that party members who were there wouldn't talk to WPR. He also said those individuals don't believe Trump supporters caused any violence. Kucksdorf said he condemns the violence last week but said he also condemns violence seen during protests last summer.

"The people that were there all told me that had they don't know who those people were," said Kucksdorf. "They just don't believe it's Trump people."

In St. Croix County, the official Republican Party webpage was changed to show an all black background and an opening line stating, "If you want peace, prepare for war." The statement continues by talking about the "digital battlefield" and "democrats in concert with the Marxist left and a complicit mass media" working to overturn the 2016 presidential election for the past four years.

According to internet archives of the St. Croix GOP webpage, the change happened sometime between Nov. 27 and Jan. 7.

The page also called for action at the local level.

"It's time to stand and be counted as a conservative warrior in the on-going fight to preserve our Constitutional Republic," said the homepage. "Please join us. We need to start local by eliminating leftist tyrants from all local and County positions in the upcoming April election."

St. Croix County Republican Party Chair John Kraft didn't respond to an interview request about the page's rhetoric in light of the deadly attack on the U.S. Capitol.

The Republican Party of Wisconsin didn't respond to a request for comment, but told the Milwaukee Journal Sentinel the party asked Kraft to change it.

"After reading the comments on the St. Croix County Republican Party website in recent days, I am shocked and disheartened by the tone of the message," said Knudson. "The comments in regards to 'prepare for war' are comments that I do not agree with, and, if taken in the literal definition of 'war,' I strongly condemn."

Knudson's post had drawn more than 400 comments as of 6 p.m. Tuesday, some of which attacked the sheriff for his stance.

St. Croix County Democratic Party Chair Dan Myers said the county GOP statement, which he attributes to Kraft, was shocking but not surprising based on similar posts in the past.

Kraft drew attention in September for a post on his Facebook page ahead of a community discussion about diversity that advised people to "bring you AR-15s and get rid of these communist Punk A---s."

"And despite what happened in Washington last Wednesday — something that I think should outrage any American left, right or center, an attack on our house of democracy — that he still feels the need to have that front and center, that kind of rhetoric, that kind of threat of violence," said Myers. "I'm at a loss for words."

A WPR analysis of every county Republican Party Facebook page in Wisconsin showed other examples of inflammatory rhetoric. The Dunn County GOP page includes posts insinuating infiltrators, not Trump supporters, breached the U.S. Capitol. Another post from Jan. 10 features a meme accusing the Democratic and Republican parties of being "one organized group of evil greedy b------s working for themselves and against the people."

"They want to silence you, threaten you, and smear you if you dare question anything or share a different narrative or ideology different than their far left ideology," said the post.

Also on Jan. 8, the Polk County Republican Party Facebook page linked to a Youtube video from Trump's personal attorney Rudy Giuliani claiming that the U.S. Capitol insurrection was the work of "Antifa and other leftist organizations."

Fond du Lac Republican Party Chair Rohn Bishop said his chapter has taken a different approach. He said they use their Facebook page as a means to promote meetings and candidates. He said the rhetoric surrounding the 2020 presidential election has been "ratcheted up."

"This has been brewing for nine weeks now because we haven't been completely honest with our voters, in my opinion, on what happened on Election Day," said Bishop.

He said moving forward, he hopes to see national, state and local GOP officials go back to focusing on educating voters about how the party can help people improve their lives and the state overall. He said convincing people to vote for rather than against something or someone is more effective anyway.