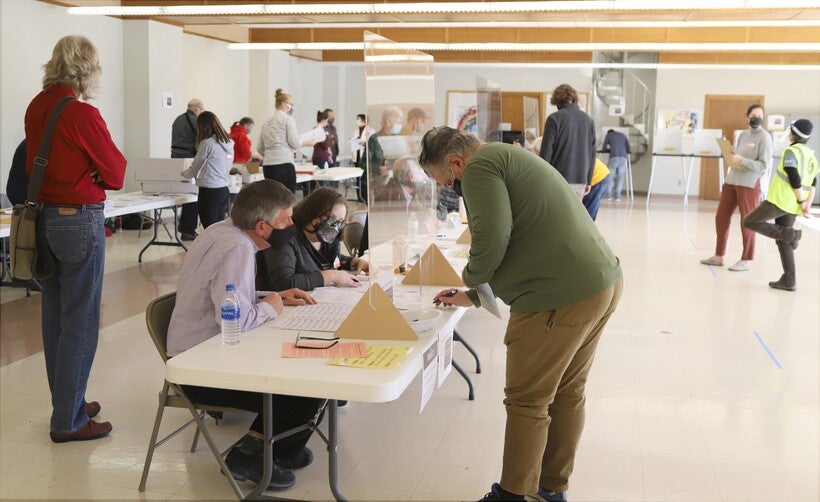 A voter checks in with poll workers at Lakeview Lutheran Church on Madison's north side on Nov. 3, 2020. Steven Potter/WPR

State Reps. Jeff Mursau, R-Crivitz and David Seteffen, R-Green Bay, joined a suit filed late Tuesday in U.S. District Court for the District of Columbia by the conservative Wisconsin Voters Alliance. It seeks to require the state legislatures in the five states to certify presidential electors before their votes are counted, a requirement that would be without precedent. Also included among the plaintiffs is Debbie Jacques, a Republican who is running to replace outgoing state Rep. John Nygren in the 89th Assembly district.

Mursau told WisPolitics, "All my constituents are just screaming about having someone do something about this," in reference to election issues raised in the lawsuit.

Attorney Erick Kaardal of the Amistad Project of the Thomas More Society argued in a legal brief that having governors certify electors without support of state legislative bodies violates the U.S. Constitution.

"The Defendants violate the Plaintiffs’ constitutionally-protected voting rights by recognizing Presidential electors who have not received state legislative post-election certification and by counting their votes," wrote Kaardal.

Rep. Steffen told WPR, in an emailed statement, the premise of the lawsuit was about constitutional roles and responsibilities of state legislators and that lawmakers incorrectly transferred away it's power to make determinations about Electors a "century ago."

"Powers assigned to legislators in either the state or United States Constitution such as voting, district map design or elector determinations are not transferable to a bureaucracy, organization or other third party," wrote Steffen.

"It’s unfortunate that Republican lawmakers are supporting a lawsuit seeking to disenfranchise 3.3 million Wisconsin voters and undo an election in which they themselves were elected while giving themselves the right to decide who wins Wisconsin's 10 electoral votes," said Cudaback.

Calls and emails seeking interviews with Reps. Mursau and attorney Kaardal were not returned.

Several lawsuits in state and federal courts from President Donald Trump and his allies trying to undo Wisconsin's election results have been unsuccessful in recent weeks, including from the Wisconsin Voter Alliance.