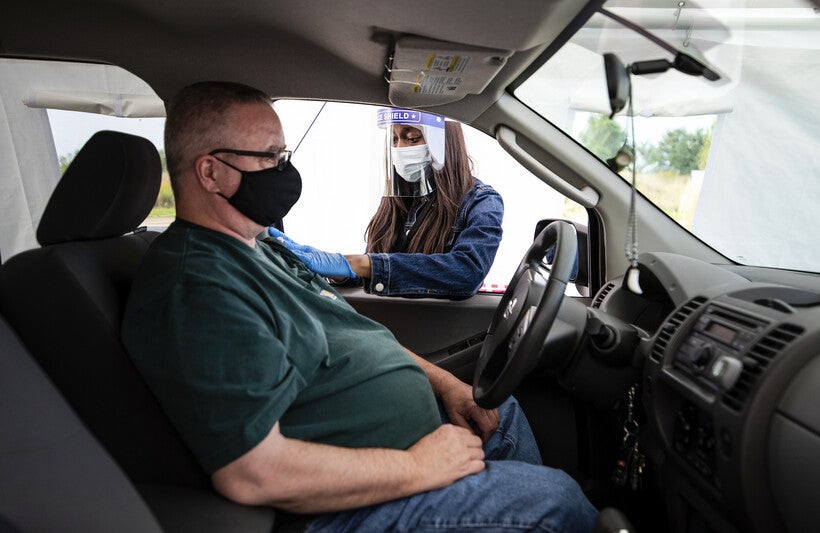 Gary Eckstein of Middleton gets a flu shot from pharmacy student Cierra Brewer, center, at a drive thru location Monday, Sept. 21, 2020, at the UW Health Pharmacy Services building in Middleton. Angela Major/WPR

More than 27 percent of coronavirus tests came back positive Sunday. That's a record high based on the latest data published by the state's Department of Health Services.

The seven-day averages for new cases and test positivity rate also reached their highest levels since the pandemic began. This comes after state health officials reported a single-day record for new cases on Saturday.

New reports of COVID-19 cases remain high, despite a drop in testing Sunday. DHS reported 2,217 new cases of the virus on Sunday, bringing the average for the past seven days to 2,091 daily cases. One week ago, the average was 1,720 daily cases.

The latest figures bring the overall total of positive cases in Wisconsin to 115,862, according to the DHS. A total of 1,281 people in Wisconsin have died from COVID-19, with no new deaths reported on Sunday.

According to DHS, 27.6 percent of all test results reported on Sunday were positive for COVID-19, bringing the overall percentage of positive tests over the past seven days to 17.9. That figure has been steadily rising this month.

Wisconsin's daily testing capacity — based on the availability of test supplies and adequate staffing — has grown from 120 available lab tests in early March to 38,959 as of Sunday. The number of actual people with test results reported on Sunday was 8,023.