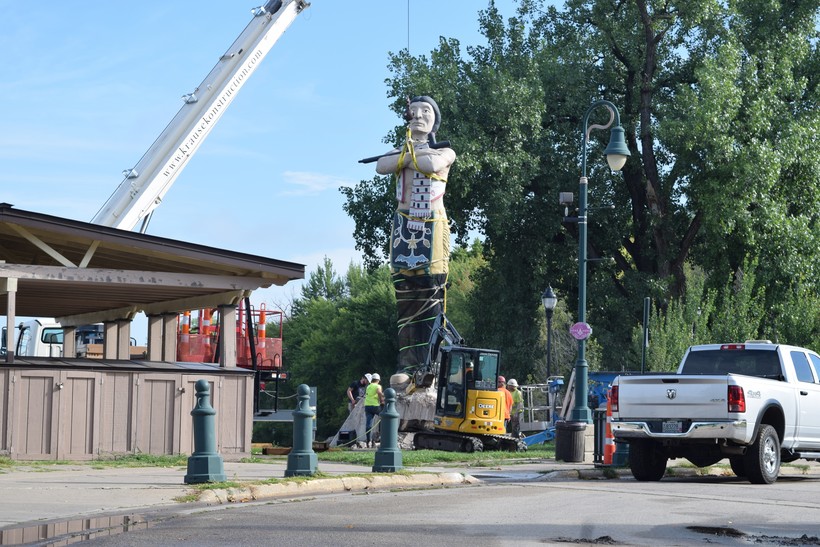 The City of La Crosse has decided to remove a controversial statue depicting a Native American that has stood near the banks of the Mississippi River for nearly 60 years.

Kera Cho Mani is a member of the Ho-Chunk Nation living in La Crosse who has advocated for its removal for 20 years. He said now that it is being taken down, he and other Ho-Chunk members feel like celebrating.

"If we look at all Native American imagery, not just in the state, but globally," he said, "it's all the same. It's all archaic. It's in the past, never modern, never highly accomplished individuals like Jim Thorpe or Mitchell Red Cloud, et cetera. So the experts have concluded, and for a very long time, that these kind of images are harmful to any Native American youth."

Kera Cho Mani said he weathered slurs and hate mail while advocating for the iconic statue to be removed. But he said it was all worth it.

"There are those, unfortunately, who don't recognize that it is progress," said Kera Cho Mani. "But that doesn't mean it isn't. It is. And so, we'll all benefit."

The "Hiawatha" statue was created in 1961 by Anthony Zimmerhakle in Riverside Park, located near the confluence of the Mississippi, La Crosse and Black rivers.

With the sounds of concrete saws and jackhammers in the background, La Crosse Parks and Recreation Director Jay Odegaard told reporters that the statue was a "great thing" for Riverside Park for 60 years. He said the city’s decision to remove the "Hiawatha" statue does not equate to a judgement about the controversial sculpture.

"The simple fact that this piece of artwork — and that's what it is, it's artwork — was located in such a prominent city park that the individuals and communities found the art offensive warranted, you know, city officials to take a look at that," said Odegaard.

Odegaard said the city has consulted with the Zimmerhakle family and a "third party," which is interested in moving the statue to property outside the city limits. He said the third party has requested anonymity but noted the plan is for the statue to still be accessible by members of the public.

As contractors worked, some city residents looked on. Donald Johnson said that some people had claimed they were offended by the "Hiawatha" statue but that being offended is "part of life."

"It's been there since the '60s," said Johnson. "I guess what you're doing is taking away a part of history. So, what are you going to replace it with?"

Odegaard said there weren’t any plans for placing anything in the spot where the statue stood.

La Crosse resident Jerry McGrath said the statue should never have been erected in the first place and that he's glad "Hiawatha" is being removed.

"I think it had to be done, you know," said McGrath. "It offended the Ho-Chunk Nation. So, no use to have it here."