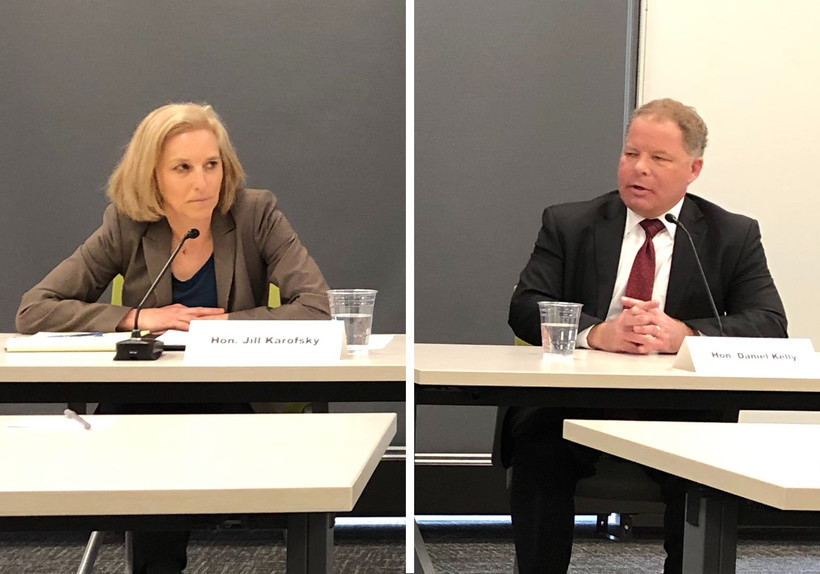 During an hour-long debate hosted by the Milwaukee Bar Association, restoring integrity to the state’s highest court was a continuous topic.

While the race for Supreme Court is officially nonpartisan, Kelly was supported in the Feb. 18 primary by Republicans, while Karofsky had the backing of Democrats.

Voters will choose a candidate April 7 for the 10-year term.

Karofsky accused Kelly Thursday of running the "most partisan political campaign ever seen in the state."

She said the Supreme Court could become less partisan by imposing stricter recusal standards on itself. The court can currently decide for themselves whether a case presents a conflict of interest. Current law lets people contribute up to $20,000 to a Supreme Court candidate.

"So what we have right now is a 'for sale' sign on our Supreme Court because not only does Dan Kelly know who he’s received money from and who he’s influencing, but they know — those outside influencers know who they have given money to," Karofsky said.

Kelly said he has always applied the law to his decisions, not politics.

"My opponent has made the centerpiece of this campaign this vile slander," Kelly said. "I have four years of history on the Supreme Court and you can see I decide cases by the law and nothing else. This behavior by my opponent has been so outside the bounds of appropriate behavior that the majority of the Supreme Court have condemned her behavior."

On Wednesday, Kelly's conservative colleagues, including Chief Justice Patience Roggensack and Deputy Chief Justice Annette Ziegler issued a statement saying attacks on the court’s integrity hurt the judicial system. They didn’t mention Karofsky by name, but said there’s a difference between debating the merits of a decision and "reckless rhetoric."

During the debate, Karofsky called herself a "consensus builder" and said she agrees with the sitting justices.

She then raised the issue of Kelly possibly not recusing himself in Wisconsin's ongoing voter purge case.

Kelly said he swore an oath to sit on all of the court's cases. Once the April 7 election is over, and it no longer effects the possibility of his election, the basis to recuse is gone, Kelly said.

"That does not mean I will actually sit on the case," Kelly said. "What it means is that I will look at the case and decide if there is an obligation for me to come back and exercise an obligation of a Supreme Court justice.”

Kelly was appointed to the court by former Republican Gov. Scott Walker in 2016 to fill the seat vacated by former Justice David Prosser.

Prior to joining the court, Kelly was an attorney in private practice, where his cases included the 2012 defense of the redistricting plan drawn by GOP lawmakers and signed into law by Walker.

Before being elected judge in 2017, Karofsky was the director of the Wisconsin Office of Crime Victim Services. She was also an assistant attorney general at the Wisconsin Department of Justice.

If Kelly wins the election in April, it would cement the current 5-2 conservative majority on the Wisconsin Supreme Court.

If Karofsky wins, it would help liberals chip away at that majority.