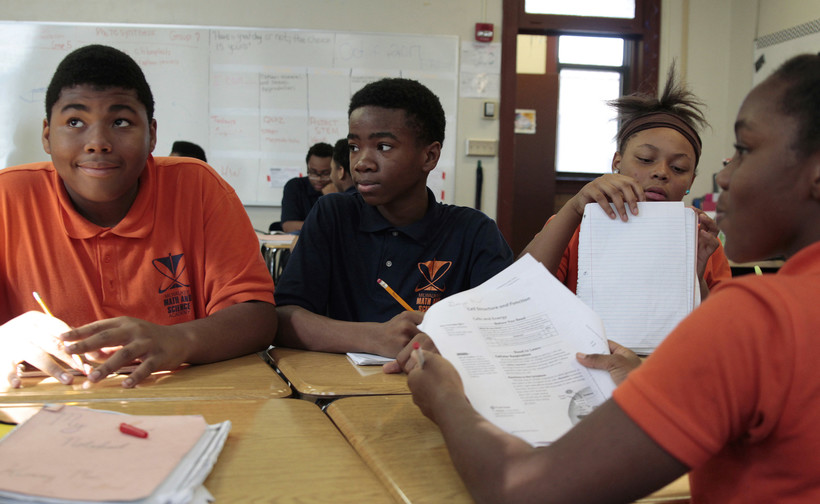 In this Oct. 20, 2017 photo, Jamain Lee, center, looks at classmate Andre'veon Mosby at Milwaukee Math and Science Academy, a charter school in Milwaukee. Next to him is classmate Dreamnoel Haynes, with Brianca Williams facing them. Carrie Antlfinger/AP Photo

The issue of school choice will get a spotlight Tuesday, when Vice President Mike Pence is slated to speak at the Wisconsin state Capitol for National School Choice Week.

The day before Pence’s visit, a conservative think tank released its projections of possible economic impacts an expansion to the voucher program could have.

Will Flanders, the research director at the Wisconsin Institute for Law and Liberty (WILL) and the paper’s author, pointed to research that found students who participated in Milwaukee’s voucher program from third to eighth grade were more likely to graduate from college than their counterparts in public schools.

He looked at the possible economic impacts if students receiving vouchers went from the current nearly 5 percent total enrollment statewide to 10 percent.

"If we reach that 10 percent figure, we could see about $2 billion in both economic, private-sector impact and local tax growth," Flanders said.

At 20 percent of total enrollment, economic impact could be $3.2 billion over 20 years, according to Flanders' projections, which cover a 20-year period.

Flanders acknowledged the projections assume all graduates stay in Wisconsin.

"I did not understand the mental gymnastics at work in the piece that was speculating about how many choice kids would end up in college," she said. "I found it to be very unscientific and speculative."

DuBois Bourenane said the money spent on voucher programs would be better spent on public schools.

"Even if we did expand the program, we need to invest in the 860,000 kids whose parents choose and wish to send them to public schools," she said.

State Republicans and Democrats are at odds on the issue of school choice. Gov. Tony Evers called last year to freeze voucher programs. Rep. Jonathan Brostoff, D-Milwaukee, plans to reintroduce a bill Tuesday that would phase out vouchers altogether.

The bill would face an uphill battle in the Republican-controlled Legislature.

"That has zero chance under liberal Democrats," Vos said.