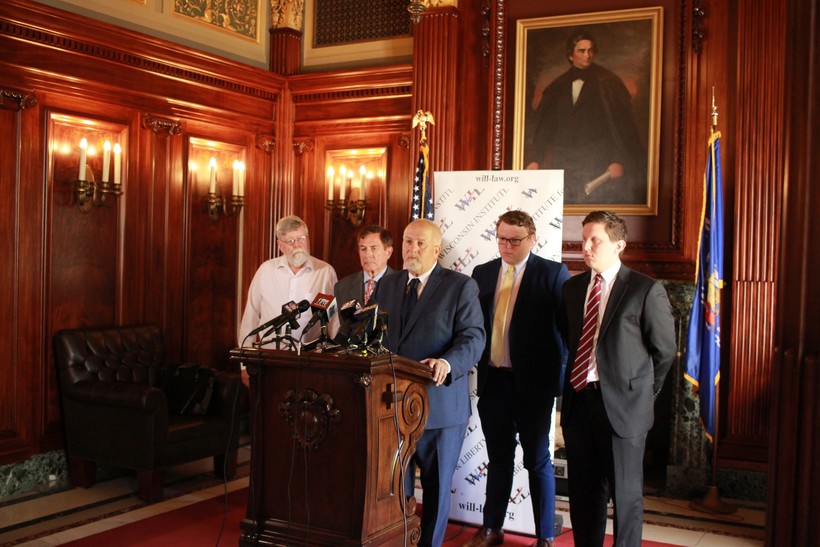 Rick Esenberg, center, president of the Wisconsin Institute for Law and Liberty, speaks at a press conference Wednesday, July 31, 2019 at the state Capitol to discuss the lawsuit WILL filed challenging the governor's veto powers. Ethan Uslabar/WPR

The Wisconsin Institute for Law and Liberty (WILL) said the lawsuit is in response to several of the governor’s budget vetoes, which he issued earlier this month. The lawsuit contends Evers used his veto pen to create new laws, rather than alter language passed by the Legislature.

"Here we have what I might call a 'magician's veto,' in which appropriations that have been passed by the Legislature have been transformed magically into something else," said Rick Esenberg, president of WILL, at a Capitol press conference Wednesday.

Esenberg said though his organization has a partisan affiliation, the lawsuit isn't taking aim at the governor because he is a Democrat.

"This case is not about politics, it's not about personalities, it's about an important principle — and that is the principle of the separation of powers," he said. "The Legislature makes the laws and the executive executes the laws."

The governor has one of the most powerful veto pens in the country, with the ability to delete words, numbers and punctuation from the state's spending plan.

Esenberg acknowledged previous governors have used their veto pens in a similar manner, but said his organization hasn't had the capacity to challenge the actions until now.

"The point is not who holds office, the point is what the authority of that office ought to be," he said.

The organization said it is challenging four of the governor's vetoes in particular. The court's ruling could be more broadly applied if the group is victorious.

The four vetoes challenged in the lawsuit include one that led to a $75 million grant program for local road projects.

The group is also challenging Evers' change to vehicle registration fees for heavy trucks, an altered definition of "vapor products" and elimination of a grant program for school buses, which Evers replaced with grants for electric vehicle charging stations.

In his veto message, the governor said he objected to the dedication of grant funds for school bus replacement because a limited number of school districts would be eligible.

"In addition, the state has a responsibility to be a leader in adopting and encouraging the use of alternative fuels as part of an overall strategy to address climate change," he wrote.

Speaking with reporters after a Wednesday afternoon event in Milwaukee, Evers said the lawsuit is a result of conservatives being unable to move on after losing the governor's office in November.

"At the end of the day, the people of Wisconsin, frankly, are sick of this stuff," Evers said. "They want us to move forward, they want us to solve the opioid crisis, they want us to make sure we have a good school system, are fixing our roads; they don't want us to be spending our time in front of the Supreme Court, arguing over the stuff the Republicans keep bringing up."

Evers also accused the lawsuit of having partisan aims.

"I know (Gov.) Scott Walker had several vetoes over his career, and I don't remember WILL going to court to take him on," he said.

While the lawsuit, if successful, would alter how the Wisconsin governor can use a veto pen, amendments to the state constitution serve the same purpose. Two previous constitutional amendments in Wisconsin have reined in the governor's veto powers.