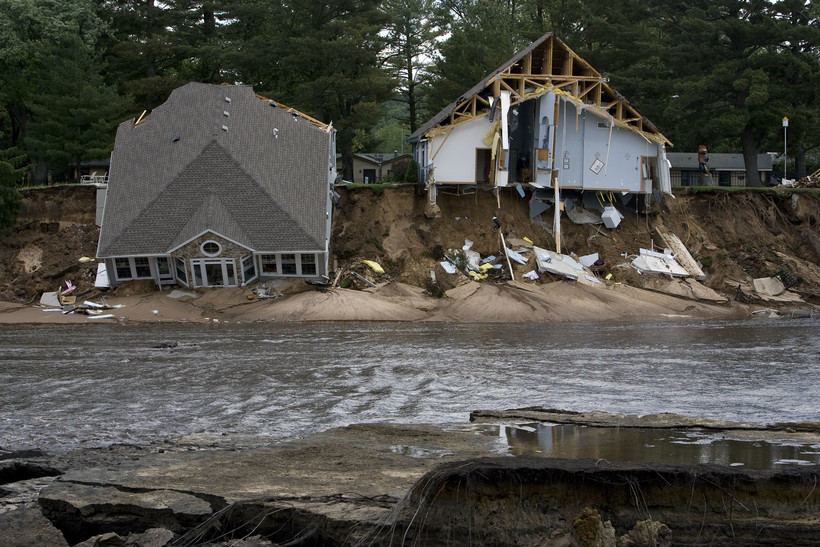 In this June 10, 2008 photo, two houses fall into an emptied Lake Delton in Lake Delton, Wis., after the 267-acre lake overflowed and drained during a major flooding event. Andy Manis/AP Photo

Some of the state’s top researchers say climate change isn’t just a possibility for Wisconsin. It’s a reality that’s already happening, in the form of higher temperatures and more rain.

"Since 1939 for Madison we’ve been collecting weather observations," said Michael Notaro. "If you look at the top 20 rainfall events, half of them have occurred since the turn of the (21st) century alone, so, in recent years we’ve had more frequent (precipitation) events of over 3 inches over the last decade than we had in the last six decades combined."

Notaro is a senior scientist and the associate director of the Nelson Institute Center for Climatic Research at the University of Wisconsin-Madison. He says researchers at the Nelson Institute expect temperatures in Wisconsin to rise by 6 to 10 degrees Fahrenheit by the end of the century.

Average temperatures in northwest Wisconsin have already risen 3 degrees over the past 60 years. And these temperature increases have been most significant during the winter months, Notaro said. 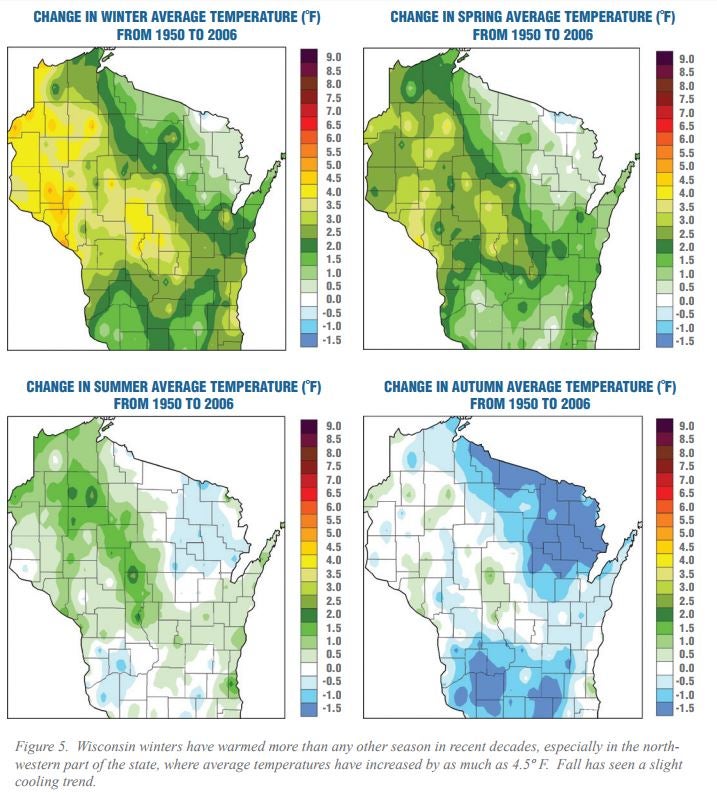 Wisconsin winters have warmed more than any other season in recent decades, especially in the north-western part of the state, where average temperatures have increased as much as 4.5 degrees Fahrenheit. Wisconsin's Changing Climate: Impacts and Adaptation. 2011. Nelson Institute for Environmental Studies, University of Wisconsin-Madison and the Wisconsin Department of Natural Resources.

"Lake Mendota now has an ice season that’s about a month shorter than it used to be," he said. "The Great Lakes are a lot more open in terms of water and lack of ice. By the end of the century we’re predicting anywhere from four to seven weeks less with snow on the ground."

That could have big effects, especially in a state with an affinity for agriculture and hunting.

Notaro said less snow encourages deer mobility, and may increase the deer population. Less snow may cause some birds, such as Mallard ducks, to migrate south later in the season. And higher temperatures are threatening the state’s cold water stream fish, such as brown trout, because high temperatures limit reproduction, he said.

Most places in the world have also been seeing extreme heat, and Notaro said some scientific predictions indicate that could eventually happen locally.

If so, there would be even more severe agricultural effects.

A 2015 report from the climate change initiative Risky Business indicates that while increasing temperatures could extend Midwestern growing seasons, extreme heat could cause crop losses in some Midwestern states.

"We also know that corn is particularly vulnerable to extreme heat. On the other side, having more CO2 (carbon dioxide) in the atmosphere is also more favorable for the plants. So you’d have more photosynthesis," Notaro said. "So there’s pros and cons, but the risk is there. With more extreme heat, more droughts, you’re gonna have more vulnerability to crop loss."

Notaro also noted concerns about climate change and its impact on human health, citing the increase in rainfall as a major threat.

Notaro said increased precipitation is tied to temperature increases because warm air can hold more moisture. This change has been most drastic in the southern part of the state where southern counties are seeing 6 more inches of rain per year than they did in the 1950s.

"This is a risk to human health, obviously," he said. "With extreme heat and also sewage overflow from extreme rainfall events and resulting cryptosporidium outbreaks in lakes."

In 2015, the Wisconsin Department of Natural Resources announced plans to conduct a major internal reorganization. Among other things, the move dissolved the agency's science services bureau, which had been in charge of climate change research. Notaro said that those changes have limited progress in the state on the climate change front.