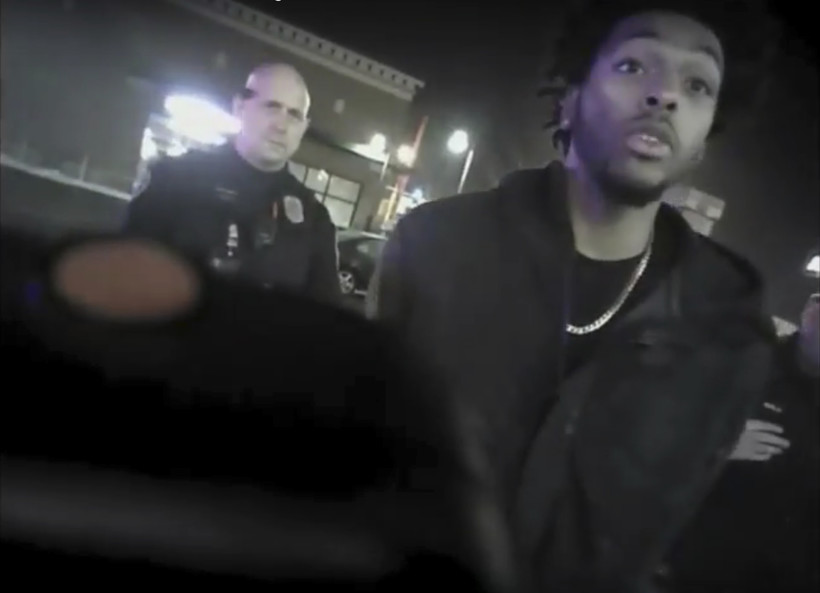 This police body-camera footage released by Milwaukee Police Department from Jan. 26, 2018, shows NBA Bucks guard Sterling Brown talking to arresting police officers after being shot by a stun gun in a Walgreens parking lot in Milwaukee. The Milwaukee city attorney is recommending a revised offer to settle a lawsuit brought by Milwaukee Bucks’ guard Sterling Brown. City Attorney Tearman Spencer is recommending a $750,000 payment and an admission that Brown's constitutional rights were violated during the arrest. Milwaukee Police Department via AP

A Milwaukee Common Council committee has approved a settlement with former Milwaukee Bucks player Sterling Brown, who sued the city over a 2018 incident with police.

Per the settlement, Brown will receive $750,000 and an apology from the city and the Milwaukee Police Department. Brown originally requested that the city acknowledge it violated his constitutional rights, however, the term isn’t included in the approved settlement, which will need to be finalized by the Common Council and the mayor.

"I know this case is not just about Sterling Brown and about the incident that happened that night, so I’m hoping that we can embrace the symbolic nature of this case and move forward to build a stronger and more compassionate city," said Alder Ashanti Hamilton, chair of the city's Judiciary & Legislation Committee.

On Monday, the committee voted unanimously to approve the settlement, which also calls for several changes to Milwaukee's policing procedures. The changes will be presented to the Milwaukee Fire & Police Commission at a future date, according to Assistant City Attorney Robin Pederson.

In a statement, Alder Khalif Rainey said the settlement requires changes to seven of the commission’s Standard Operating Procedures, including more thorough documentation of when weapons are drawn.

"I believe that by requiring police officers to file a report every time they draw a gun while on duty, the Milwaukee Police Department will be able to better provide information to the public and these additional incident reports would hold officers accountable and allow them to reflect on the incident that occurred," he said.

Per the settlement, as published by Urban Milwaukee, the officer who confronted Brown has been moved off patrol duties, and body cam video from the incident will be used to train officers on de-escalation. The city will also walk back unsupported claims made in its defense that Brown’s injuries were caused by his own actions that night.

In 2019, the city offered Brown a $400,000 settlement, which he rejected. Over the last three years, city officials have discussed the lawsuit at several meetings, largely in closed sessions, according to the Milwaukee Journal Sentinel.

Brown’s lawsuit stemmed from an early morning incident in January 2018. An officer approached Brown, a Black man, after he parked across multiple spots at a Milwaukee Walgreens. In body cam footage, Brown remains calm while he’s questioned by the officer. But after he doesn’t immediately comply with a request to remove his hands from his pockets, police appear to tackle and taser him.

No charges were filed against Brown.

Brown signed a free agent contract with the Houston Rockets before the current NBA season. But as a Buck, he played an active role in the team’s social justice initiatives.

Last summer, he led a Milwaukee protest in the wake of George Floyd's murder in the Twin Cities. He also read a portion of the team's statement after it sat out a playoff game following the police shooting of Jacob Blake in Kenosha last year.

The city of Milwaukee settlement brings the total cost of police brutality settlements to more than $30 million since 1958.

These police brutality payouts come at a time when the cash-strapped city has had to make tough budget choices. Since 2004, the city of Milwaukee’s police budget, which includes pensions and health care costs, has increased by $115 million. Over the last two years, Milwaukee has cut nearly 200 police officers.

Last week, Milwaukee's Common Council president and county executive testified during a meeting of the state Legislature's budget committee to get support for a proposal by Gov. Tony Evers that would allow communities to increase local sales tax by a half-cent. They said doing so would help balance their budgets.