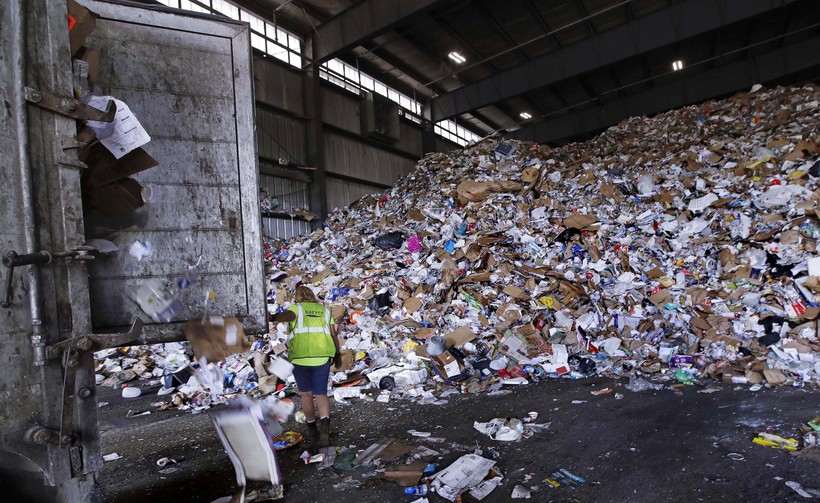 In this Thursday, Sept. 6, 2018, photo, a trailer door is opened on a truck filled with unsorted recyclable refuse as it is offloaded and added to a giant pile in a processing building at EL Harvey & Sons, a waste and recycling company, in Westborough, Mass. Recycling programs across the United States are shutting down or scaling back because of a global market crisis blamed on contamination at the curbside bin. AP Photo/Charles Krupa

China No Longer Accepting Recyclables From US Forces A Closer Look At Contamination Of Materials
By Rich Kremer
Share:

A policy change in China is causing waste haulers and local governments in Wisconsin to take a closer look at what residents put in their recycling bins.

In 2017, China established a policy called "National Sword," which banned the importation of plastic waste and set contamination standards for other materials that waste haulers say are "virtually impossible" to meet. The Chinese government said the policy was meant to protect the environment.

Waste Management spokeswoman Lynn Morgan said while most of Wisconsin's recyclables are shipped to the eastern United States, not China, there’s still a backlog because those coastal states were major exporters to China.

"With this oversupply, a change is taking place that probably was long overdue and that's that people are looking to recyclers to provide cleaner material — fewer contaminants in the materials — that we provide to the end users," said Morgan.

"We call it 'wish-cycling,'" Morgan said. "So, it's, 'Hey, I wish this was recyclable. I'm going to hope that it's recyclable. So, I'm going to put it in the recycling container and hopefully I'm right. If not, someone else will fix it.' The cost of fixing it is significant."

"The biggest problems that we see are plastic bags and food and liquids," said Morgan. "If we could wave a magic wand and eliminate those contaminants from the mixed-recycle stream, it would make a big difference."

Morgan said waste haulers are paying attention to recycle bins and dumpsters that have high amounts of waste in them. That can result in financial penalties.

Meleesa Johnson, Marathon County solid waste director and president of the Associated Recyclers of Wisconsin, said even her county department was warned by a hauler about having too much waste in recyclables dropped off at their office.

"And that was a wakeup call," said Johnson. "I mean, I’m out telling people to make sure they're doing good quality control and we weren’t even taking care of it here.”

Johnson said Marathon County is redoubling efforts to educate residents and businesses in hopes of adapting to changes within the recycling industry.

"If we can get good quality control right from the households, those municipalities probably will not have to face penalties for having highly contaminated recyclables," she said.