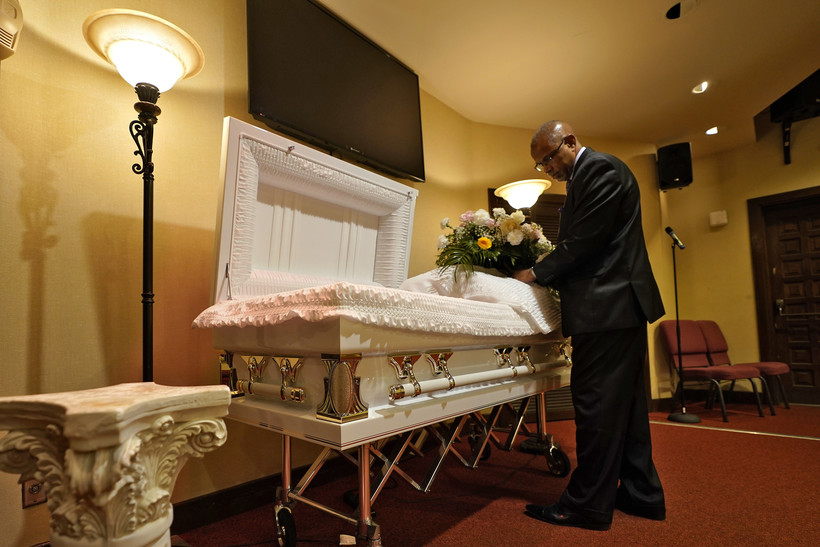 In this Thursday, Sept. 2, 2021 file photo, a funeral director arranges flowers on a casket before a service in Tampa, Fla. According to a study published Thursday, Oct. 7, 2021, by the medical journal Pediatrics, the number of U.S. children orphaned during the COVID-19 pandemic may be larger than previously estimated, and the toll has been far greater among Black and Hispanic Americans. Chris O'Meara, AP File Photo

Nearly 1,100 Wisconsin kids have lost a parent or caretaking grandparent as of June 2021, state data shows
By Jonah Beleckis
Share:

More than 1,000 Wisconsin children lost a parent or caretaking grandparent to COVID-19 as of June 2021, and one researcher who studies child grief said leaving their trauma unchecked could have drastic consequences.

The figure — 1,098 children statewide — is from the most recent state estimates available, according to a report from the Wisconsin Office of Children’s Mental Health shared Monday by the state Department of Health Services.

If nothing is done to provide enough support to these children, social epidemiologist Rachel Kidman said they will be more likely to drop out of school, become depressed, die by suicide and/or become victims of sexual abuse.

"Those children are facing a real uphill battle. And we have a choice to make right now about investing in mental health care for children, investing in strengthening families’ economic position, investing in parenting," she said on WPR’s "The Morning Show."

"If we don't, it won't be one obvious hit," she continued. "But it'll be a lot of children who are going to struggle across their life course more than they need to."

Wisconsin's rate of children being orphaned because of COVID-19 is one of the country's lowest. Still, the state has racial disparities among children suffering this type of loss.

American Indian or Alaska native children in Wisconsin are nearly five times as likely to have lost a caregiver to COVID-19 compared to their white counterparts, according to the report. For Wisconsin’s Black children, the rate is 2.5 times higher than that of white kids.

"The burden of mortality is absolutely not shared equally," Kidman, of Stony Brook University, said of the disparities.

Additionally, she worried about how support services are delivered.

"We know, for example, children in Black families are a lot less likely to receive survivor benefits within the Social Security program," she said. "And those whose parents were born outside the U.S. are even less likely."

It’s more than just handling the immediate grief following the death of a loved one. Kidman said that’s only the beginning because of the long-term effects that losing a parent have on children’s mental health and educational outcomes.

When looking at what should be done to head off these consequences, she floated some policy options and other remedies:

Some of these options involve helping families because, Kidman said, "the family is best able to help an individual child." Working through extended families helps, too, as those closest to the children will know them best.

She also wrote about setting up a national child bereavement cohort, which could identify children who lost a parent, watch out for early signs of serious problems and connect them with care. Also, such a group could serve as subjects for long-term research.

Kidman’s analysis of the COVID-19 pandemic is informed by her research on the HIV epidemic.

"I never thought that my expertise on pandemics and mass child bereavement would be relevant to the United States," she wrote in the journal Nature in August. "As I saw the daily death counts grow, I worried about the children being left behind."

Kidman found that 40,000 children in the U.S. were orphaned because of the pandemic between February 2020 and February 2021. That comes out to about one orphaned child for every 13 COVID-19 deaths nationally.

There is precedent for funding programs to help these children. Kidman pointed to efforts after the Sept. 11 terrorist attacks and a portion on U.S. global AIDS relief from 2003.

With all this death, she wrote that there needs to be more research on child bereavement support. Research now will help during whatever crisis comes next.

These children deserve the attention, she said.

"I think people have been concerned about their education, but I don't think people realized how much children were grieving for parents," she said. "There have been anecdotal stories in the news, certainly. But I think the scale of the crisis has really been lost."