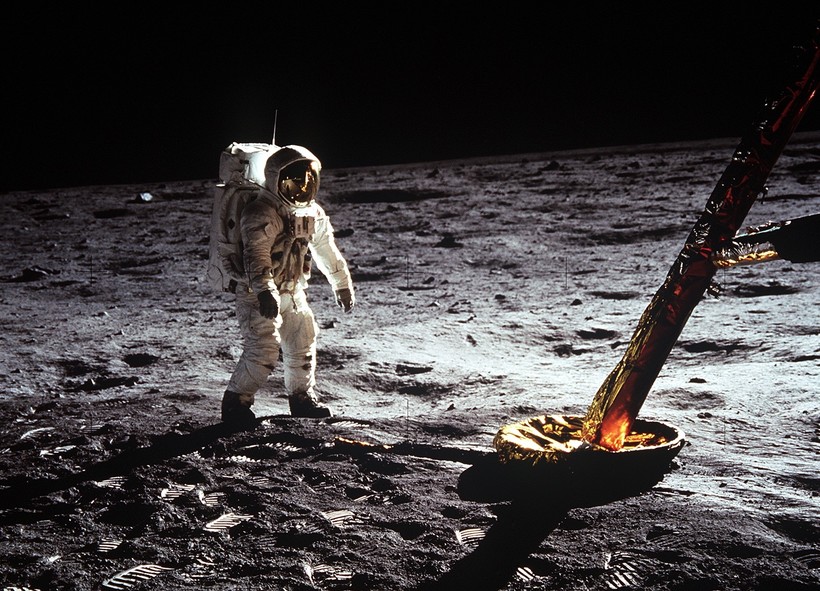 Astronaut Edwin "Buzz" Aldrin walks on the surface of the moon during the Apollo 11 mission on July 20, 1969. Image courtesy of NASA

Check Out Some Great Space Books, Courtesy Of An Astronomy Expert

Paul Kinzer is no stranger to writing about space — the astronomy expert is the author of the instructional "Stargazing Basics: Getting Started in Recreational Astronomy." But Kinzer is also an avid reader of astronomy nonfiction, and on a recent episode of "The Larry Meiller Show" on Wisconsin Public Radio, he shared some new books he likes and some older ones that he loves to revisit.

Here are some titles Kinzer recommends:

"Eclipse Chaser: Science in the Moon's Shadow," by Ilima Loomis, with photography by Amanda Cowan

This book tells the story of the August 2017 solar eclipse, and more specifically the story of astronomer Shadia Habbal, who spent years developing a plan to use the event to study the sun’s corona.

"Galileo and the Science Deniers," by Mario Livio

This historical read takes on the life of Galileo Galilei, considered one of history’s greatest and most fascinating scientists. It sheds new light on the discoveries made by "the father of observational astronomy," and how the physicist was often challenged by science deniers.

"How Apollo Flew to the Moon," by W. David Woods

Kinzer said that the book includes detailed explanations of the machinery behind the early Apollo missions and how it came to be, going step by step through a journey to the moon and back. Kinzer said it's a good read for those eager to take a deep dive into technical details, but who are not actual rocket scientists.

"A Man on the Moon: The Voyages of the Apollo Astronauts," by Andrew Chaikin

"A Man on the Moon" provided the source material for the 1998 HBO miniseries "From the Earth to the Moon." Kinzer described the book as "a classic, wonderful book, written when it was still possible to interview most of the folks involved" in the Apollo missions.

If the name of one of the authors of "Apollo 13" seems familiar, that's because Jim Lovell is the actual commander of the well-known, accident-plagued mission.

"I think the story of Apollo 13 is one of the greatest, and most gripping in not just U.S. history, but in the history of the world. There were no villains, just several hundred thousand people who ‘worked the problem’, and billions who waited, hoping them on," said Kinzer. "I was one of them, at 9 years old."