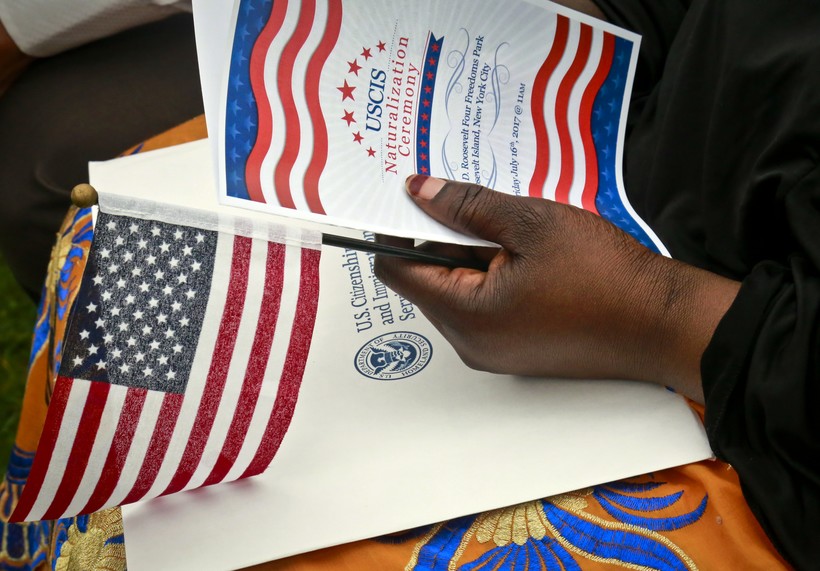 Fatoumata Jangana, from Gambia, holds a program and flag during U.S. Citizen and Immigration Services ceremony for 50 new citizens from 24, Friday June 16, 2017, in New York. Jangana became a citizen after 21 years in the U.S. Bebeto Matthews/AP Photo

Immigration attorneys and other experts say changes to the way U.S. Customs and Immigration Services processes visa applications are creating uncertainty for employers and universities in Wisconsin and across the country.

And they say policy changes going into effect this summer may make things worse.

On June 28 and July 13, USCIS released two memos paving the way to change how the agency handles the denial of applications to change or extend visas. The agency said the changes are part of an effort to implement President Donald Trump’s "Buy American, Hire American" executive order, which he signed in April 2017.

In an email, USCIS spokesman Michael Bars wrote the goal of the changes is "safeguarding the integrity of our immigration system and ensuring its faithful execution so that the wages and working conditions of U.S. workers are protected."

The June 28 memo states that the agency will issue what’s called a "notice to appear" to anyone whose application or petition is denied and who is then in the U.S. unlawfully. That notice would formally initiate deportation proceedings.

Several immigration attorneys, including Esther Contreras, a partner at the Chicago-based firm Masuda, Funai, Eifert & Mitchell, Ltd., who works with several Wisconsin-based clients, said the new policy could ensnare people who previously could have simply left the U.S.

"We would usually say, 'OK, you need to depart the United States and let’s figure out a plan to get you back in status,'" Contreras said of clients whose applications to extend or change their visas were denied.

But when the government sends a notice to appear to a client, "that’s a whole other ball game," Contreras said.

If someone chooses to stay and appear in court to appeal the denial, it could count against them because every day they remain in the U.S., they will be considered "out of status." If they then lose their appeal and have been out of status for six months or more, they will be barred from the U.S. for at least 10 years. If they choose to leave the country upon denial and fail to appear in court, they are barred from entry for at least five years.

But Bars said anyone receiving a notice to appear can also appeal their denial through other avenues and that the notices may not be sent automatically.

"USCIS retains the right to exercise prosecutorial discretion to not issue an NTA on a case-by-case basis," he wrote in an email response to questions from Wisconsin Public Radio, "and remains committed to protecting the integrity and faithful execution of our laws for safer and more secure U.S. communities."

It's a change from the Obama administration's policy of requiring officers to request additional information before denying applications.

Bars called the previous policy one of the many abuses of the immigration system under the Obama administration. The agency also said the new policies will help streamline the application process.

"(T)his policy change is part of an ongoing effort to help faithfully execute and protect the integrity of our laws, cut down on frivolous applications, reduce waste, and help ensure legitimate, law abiding petitioners seeking greater safety, security and prosperity aren’t undermined by those able to game our system," Bars said.

Immigration attorneys said the two policies combined could lead to a spike in deportation proceedings for people who are currently in the country legally.

"This could potentially affect a lot of different groups of people out there," said Stuart Gilgannon, a Milwaukee immigration lawyer. "In terms of applicants for family-based immigration benefits ... but also a lot of employment-based or business immigration cases where local employers are trying to help a desired employee receive a work permit or a work visa."

He and others said they’re already experiencing challenges under a series of changes put in place at USCIS since the beginning of the Trump administration. Gilgannon said application forms have become longer and are receiving more scrutiny.

"We’re receiving a huge spike in the issuance of request for additional evidence," Gilgannon said. "We’re being held to a higher standard perhaps than in the past with regard to what kind of documents are sufficient or what kind of evidence is required to meet a certain criteria."

But Contreras said it feels like no amount of documentation is sufficient in the current climate.

"A lot of (the requests for evidence) are issues where they were already addressed, issues where we’ve never had a problem before," she said. "Extensions where there was no change in the new petition and all the sudden it’s being challenged."

Their accounts are in line with a report from the National Foundation for American Policy, a free-market think tank supportive of immigration, that found denial rates for H-1B visas rose from about 16 percent in the third quarter of 2017 to about 22.5 percent in the fourth quarter, while requests for evidence rose from 22.5 percent to 68.9 percent at the same time.

In addition to the April 2017 executive order aimed at protecting American workers, an October 2017 Department of Homeland Security audit recommended several changes to the H-1B visa verification process. The audit found USCIS verification practices were insufficient to combat fraud within the program.

The changes impact foreign students and scholars as well.

"We do have concerns about the cumulative impact of changes that are being implemented very rapidly over the last year," said Cynthia Williams, policy and program development officer for international division of the University of Wisconsin-Madison. "They add bureaucracy and time and cost to visa applications and reporting. And I think they make the U.S. appear less welcoming to students and scholars who need timely visa processing for the programs that they want to pursue in the United States."

At UW-Whitewater, immigration specialist Margaret Wheeler said there are similar concerns about the policy changes outlined in this summer’s memos.

Wheeler has been with the university since September and said they often pay an expedition fee for work visa applications. Academic departments that can’t foot the roughly $1,000 bill have seen applications linger for eight to nine months.

Gilgannon echoed that with the added bureaucratic hurdles, he has seen longer processing times for applications filed in the Milwaukee USCIS office. And Contreras said the changes leave her clients in a tough position.

"That kind of uncertainty is bad for business," she said. "If you're not sure that someone is going to be able to continue on a project or you think you’re going to have to pull someone from a project, that impacts your business and your bottom line."

A spokesman with Johnson Controls confirmed the company is also seeing more paperwork and more questions from USCIS agents for their international workers. The company is one of several Wisconsin-based employers with dozens of workers using H-1B visas.

USCIS spokesman Bars said the agency is "committed to reforming employment-based immigration programs so they benefit the American people to the greatest extent possible."

But UW-Madison’s Williams sees another possible outcome from the ongoing changes to visas.

"This provides a way to remove and bar from entry, for a long time, some of the best and brightest people from around the world who are here," she said. "Most of these are professionals who are here on legal status."