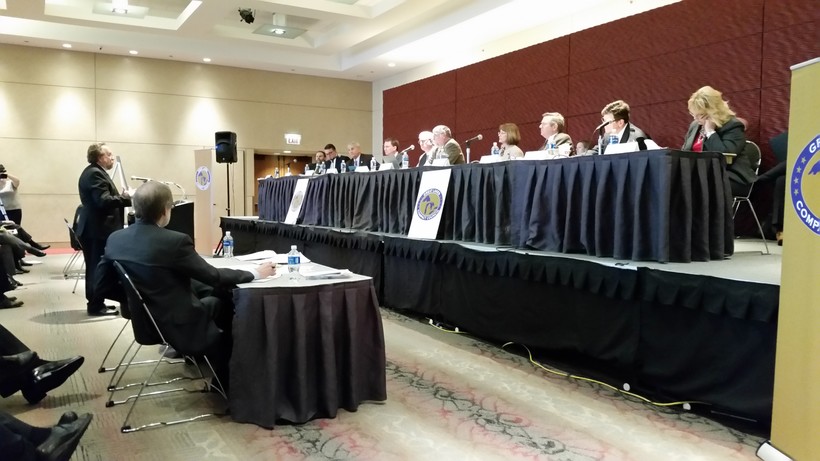 Council Is Taking The Challenge, Arguments Under Advisement
By Chuck Quirmbach
Share:

A coalition of Great Lakes mayors squared off against the city of Waukesha in a Chicago hearing room Monday.

The mayors are asking the Great Lakes Compact Council, a group representing Midwest governors, to reverse or change last year's decision by the council to allow Waukesha to tap into Lake Michigan and draw drinking water from it.

Waukesha would become the first community outside the Great Lakes Basin to receive lake water under terms of the Great Lakes Compact — a multi-state agreement approved in 2008. Waukesha argues it qualifies for Great Lakes water because it's in a county that straddles the basin.

The challenge to last year's ruling comes from the Great Lakes and Saint Lawrence Cities Initiative, made up of 127 United States and Canadian communities. Initiative attorney Jill Hutchison told the Compact Council it should've taken a closer look at having Waukesha reduce the radium in its current groundwater supply.

"A number of Waukesha's neighbors on that exact same aquifer ... treat for radium," Hutchison said.

But attorney Paul Kent, representing Waukesha, said treating groundwater is not reasonable given the size of the city and its current overall water quality.

The two sides also debated Waukesha's plan to return treated wastewater to Lake Michigan via the Root River, which flows through Racine.

"First and foremost, it will change the chemical constituencies of it. It will add more phosphorus and other things like that to the river, " Hutchison said.

Kent responded by pointing to the city's earlier testimony in the case about the return flow.

"It shows that its discharge is anticipated to be of higher quality than is already there in the Root River, and the increased flow will benefit the fishery,"  Kent contended

The Compact Council, including Wisconsin Department of Natural Resources Secretary Cathy Stepp, voted to take the matter under advisement. The council may decide during a conference call set for Thursday, April 20, whether to let the appeal of last year's decision continue.

Parties in the case say the current challenge may be a prelude to a federal lawsuit from critics of the diversion plan.