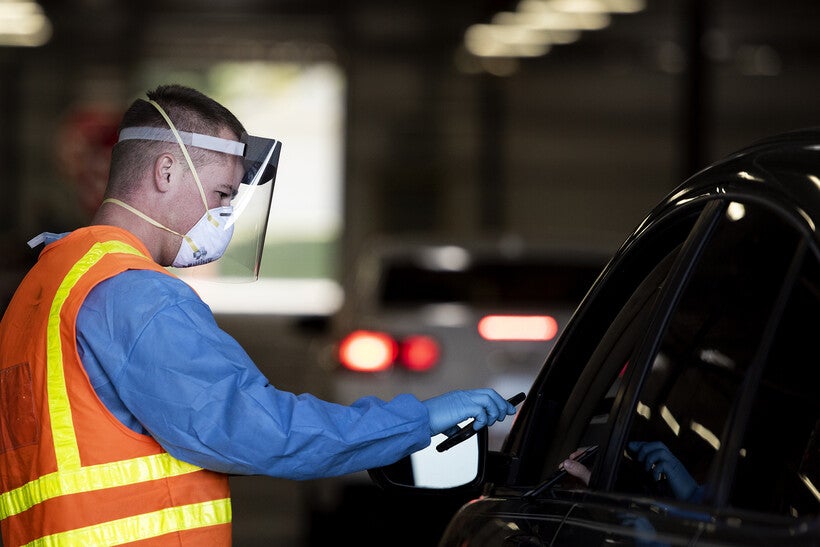 Rising deaths from COVID-19 across Wisconsin are taxing the state's infrastructure for managing the bodies of those who have died — straining capacity at hospitals, funeral homes and medical examiners.

And data from the Centers for Disease Control and Prevention show that Wisconsin has seen thousands of deaths related to COVID-19 not captured in official death counts.

In Marathon County, where more than 80 percent of the county's 85 probable COVID-19 deaths have happened since Oct. 1, Medical Examiner Jessica Blahnik has added hours and weekend shifts for on-call deputies. She and other staff have worked long hours to keep up with duties, which include postmortem examinations. And late last month, the county received a refrigerated morgue truck ordered as a precaution against the rising death toll. They haven't had to use it yet, Blahnik said. But the last month has been trying.

"It's very challenging ... just because of the sheer volume of cases," Blahnik said.

The county, which includes Wausau, is a hub for medical services for central and Northwoods Wisconsin. As a result, some deaths of residents of other counties actually happen in there. Early in the pandemic, officials worried about whether the county would have capacity to handle high death counts.

"We looked at ... not just the medical examiner's office, but also how many decedents can the hospitals handle? How many can the funeral homes handle?" said Philip Rentmeester, Marathon County's emergency management director. "And the trends showed that we were going to be overwhelmed."

That hasn't happened, yet. Medical treatment against the disease has improved since spring, and death rates have declined. In the same way that many hospitals in recent weeks have put into place surge plans they made in the spring, so have facilities and officials responsible for bodies of the deceased.

But the disease has been spreading out of control throughout Wisconsin for more than a month, driving the state's number of hospitalizations to all-time highs. In turn, Wisconsin has seen deaths climb in recent weeks, setting a daily record on Oct. 27, when 64 deaths were recorded.

Deaths directly attributed to COVID-19 are not the only deaths medical examiners like Blahnik are dealing with. She shared data showing that as of Monday in Marathon County, 1,091 people had died of all causes. On Nov. 9, 2019, the county had recorded 864 total deaths.

Marathon County has recorded 85 probable deaths from COVID-19, but has had nearly 230 more deaths in total than it had by this time last year. Through all of 2019, it reached 1,051 deaths, meaning it's already exceeded 2019 totals with eight weeks left in the year.

That fits a pattern scientists have tracked in the pandemic, which is that it has led to measurable "excess deaths" all over the world. Some have secondary causes; for example, people who are reluctant to seek unrelated medical treatment in the pandemic for heart disease or other conditions may put themselves at risk. The pandemic has also been associated with rising mental health challenges and even higher murder rates.

But a study published in late October by the CDC found that at least two out of three of all excess deaths in the U.S. were from COVID-19. The CDC found that official estimates "might underestimate the total impact of the pandemic on mortality."

That rate could increase. In the last seven days, 279 people have died from the disease. Over the weekend, the state broke its daily record for new infections with more than 7,000 cases recorded on Saturday. On Monday, there were more than 2,000 people hospitalized with COVID-19 — more than at any point during the pandemic. Wisconsin also had its highest-ever test positivity rates on Monday, meaning the spike in hospitalizations and deaths is likely to continue.

Blahnik said the rise in deaths in her community has taken an emotional toll as well.

"Even though we deal with death and dying every day, it is heartbreaking," she said. "We're talking to a lot of these families and they're really struggling that a lot of them couldn't be with their loved ones at the time of death. It hurts them not to be able to spend that time with their family at the end of life."