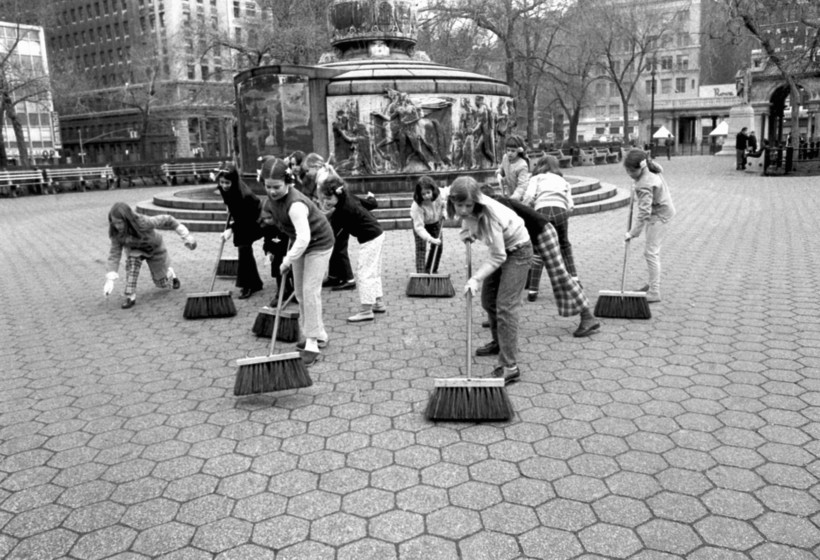 Children of the convent of the sacred Heart School in New York City man brooms April 22, 1970 as they clean a monument in the city's Union Square. The children came out in force in observance of Earth Day. AP Photo

Celebrating 50 Years Of Earth Day In Story And Song

Earth Day started 50 years ago this April 22! A half century of activism around this annual celebration of protecting the planet’s environment finds its roots in Wisconsin and the people who have shaped the environmental movement over the last two centuries. The full story includes millions of people in the Badger State and beyond, but below are three of the most prominent individuals with connections to Wisconsin. These three serve as needed inspirations and role models, and their work and lives are celebrated in folk music.

Born in 1916 in Clear Lake, Wisconsin, Gaylord Nelson served Wisconsin as a U.S. senator for 18 years, after having been elected to the state Senate for 10 years and elected twice as the state’s governor. While a U.S. senator, and during a variety of environmental crises in the late 1960s like the oil spill off the coast of Santa Barbara, CA, Nelson proposed a nation-wide "teach-in" about the environment. Twenty million people took part in the first Earth Day on April 22, 1970, around 10 percent of the U.S. population at the time.

That first Earth Day is credited with building bipartisan support later in 1970 for the creation of the Environmental Protection Agency and passage of the Clean Water Act, Clean Air Act, and Endangered Species Act. In the 50 years since that first observance, Earth Day has grown to include over 1 billion people each year, in 190-plus countries, according to earthday.org.

Tom Paxton was a fixture in the Greenwich Village folk music scene of the 1960s and participated in a teach-in in January 1970 at Northwestern University near Chicago. Titled, "Project Survival," the gathering of over 10,000 students and community members, according to James Sullivan in his book "Which Side Are You On?," was a precursor to the first Earth Day just three months later.

The event hosted sessions on water pollution, overpopulation, and the limited supply of natural resources, Sullivan writes, and then, "During a midnight 'sing-in,' the folk singer Tom Paxton debuted a disconsolate new song, 'Whose Garden Was This.'"

John Muir was originally from Scotland, coming to the U.S. in the mid-1800s with his family when he was just 11 years old. The family eventually settled in central Wisconsin, where Muir grew up and explored the surrounding countryside.

After a stint as a student at the University of Wisconsin-Madison, Muir journeyed throughout the northern U.S., eventually making his way to Indianapolis, then walking to the Gulf of Mexico, and then traveling by boat to Cuba, Panama, and finally California.

Discovering his true passion, spiritual life and calling in the wilderness, Muir wrote extensively about his experiences and the need to preserve the wild places of the U.S. His work led to the establishment of Yosemite National Park, with some calling him the father of the National Park System.

Here’s Muir’s life in song, "The Ballad of John Muir," by the Black Irish Band.

Originally from Iowa, Aldo Leopold had already served in the U.S. Forest Service for 15 years when he was transferred to Madison in 1924. Serving as the first chair of game management for UW-Madison, Leopold is best known for his extensive writings about the natural world and wilderness, having produced the first textbook in the field of wildlife management, and publishing more than 500 articles, essays, and reports, according to the UW-Madison Aldo Leopold Archives.

"A Sand County Almanac," a collection of Leopold’s essays, was published shortly after his death in 1948 and has been called one of the most important pieces of environmental writing ever. Today, his family’s home along the Wisconsin River near Baraboo has become the sight for tours, classes, and other educational activities that inspire others to follow Leopold’s legacy.

Susan Werner wrote the song "Ode To Aldo Leopold" in honor of that same legacy.