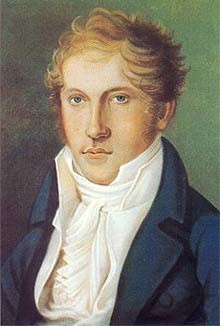 Louis Spohr was one of the first conductors to use a small stick--a baton--instead of a staff.  The baton enabled Spohr to direct the orchestra in subtle ways, the staff was good for little more than beating time.  But the conductor whom Spohr found dramatic and expressive--to a fault--was Beethoven.

Spohr had heard plenty about Beethoven's conducting before actually witnessing it, and still was shocked.  Beethoven used all sorts of body motion to communicate with the orchestra. For emphasis he would throw his arms wide apart, for a quiet passage he would bend down.  The quieter the passage, the farther down Beethoven would go until he had all but crawled under the music desk.  As the music got louder he would rise back up, slowly at first, then leap into the air, often shouting as he went.

During a performance of one of his piano concertos Beethoven was the soloist, and he got so carried away with conducting that at one point he forgot to play the piano.  He flung his arms wide and knocked the candlesticks off each side of the piano.  The audience burst out laughing, and Beethoven got so mad that he ordered the orchestra to start over again.

Two choirboys were enlisted to hold the candlesticks out of harm's way.  One of them got increasingly intrigued by the piano score and came in closer and closer just as a loud passage broke forth.  Out went Beethoven's arm, knocking the choirboy in the mouth so that he dropped his candlestick.  The other choirboy, having followed Beethoven's motions more cautiously, ducked, to the complete delight of the audience.

Beethoven fell into such a rage that on the first chord of his solo he pounded the piano so forcefully that he broke half a dozen strings.  Die-hard music lovers in the audience tried to restore order, but failed.  After that debacle Beethoven became increasingly reluctant to give concerts.