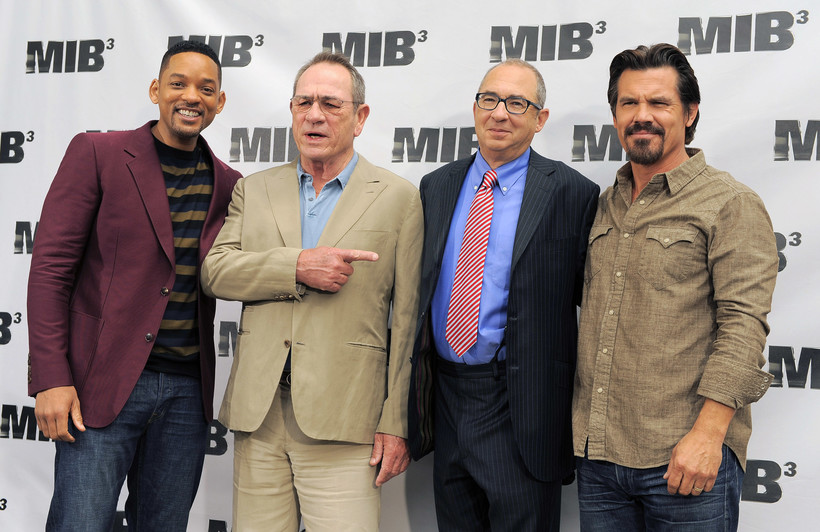 Director Barry Sonnenfeld, second from right, poses with cast members, from left, Will Smith, Tommy Lee Jones and Josh Brolin at a photo call for the film, "Men in Black 3," Thursday, May 3, 2012, in Beverly Hills, Calif. (AP Photo/Chris Pizzello)

Call Your Mother: Filmmaker Barry Sonnenfeld Looks Back With Humor In New Memoir

Director Talks About Starting Out With Coen Brothers And Challenges Of Directing
By Brad Kolberg
Share:

"Well, it was one of the more surreal moments of my life," said Barry Sonnenfeld. "I was at Madison Square Garden in 1970. I was a senior in high school."

When Sonnenfeld recently spoke with Doug Gordon of WPR's "BETA" about his new memoir, "Barry Sonnenfeld, Call Your Mother: Memoirs of a Neurotic Filmmaker," the filmmaker and writer started by explaining where he got the name for the book.

"It was the first Peace Concert in New York. Peter, Paul & Mary, the cast of 'Hair,' all these other people," he said. "And at 2:20 a.m. in the morning, while Jimi Hendrix was warming up for the second time because he had left the stage in a huff earlier, came the following announcement over the Madison Square Garden PA system: 'Barry Sonnenfeld, call your mother.'"

Embarrassed, he went to find a phone as the arena chanted his name. When he got his mother on the line, he was expecting to hear of a family tragedy, but instead, she was upset because he was 20 minutes late arriving home.

"So that was my mother. And therefore that's the title of my book," he said.

"Well, you know, she was very depressed. You know, she spent most of her time in her bedroom with a wet towel over her face," he said. "She told me that if I went to 'Sleep-Away School' — others call it college — she would commit suicide."

So he spent the next three years living at home and attending New York University. But for his senior year, he went away to Hampshire College.

"I'll get to both go away to college, and my mother commits suicide. Two birds, one stone. Win, win," he said. "Unfortunately, my mother reneged on her threat. So she remained a living entity in my life."

Sonnenfeld's darkly humorous animosity toward his mother continued well in to adulthood, coming out very publicly on David Letterman's "The Late Show," or on the pages of The New York Times.

"But the worst, I think really was Newsweek ... had a cover story on 'Men in Black,'" he said. The article described Sonnenfeld walking around the movie's set offering anyone $400,000 if they either got him kicked off the movie or killed his mother.

Sonnenfeld remembered, "Mom called me and she said, 'Barry, do you really wish I were dead?'"

This neurotic flair for the dramatic and love of dark humor has served Sonnenfeld well in his career as a filmmaker. He got his start in film when he met Joel Coen at a Christmas party.

"We were the only two Jews there, and we sort of could see each other from across the room and sense the Semitic nature of our being," he said.

They started talking about a script Joel and his brother Ethan Coen had written for a low-budget movie called "Blood Simple." Sonnenfeld mentioned he owned a 16-millimeter camera, and the rest was history. He became the director of photography for the Coen brothers' directorial debut.

Sonnenfeld continued to collaborate with the Coens as director of photography on films like "Raising Arizona" and "Miller's Crossing."

He also made a huge name for himself without the Coens, serving in the same capacity for huge box office hits like "Big," "When Harry Met Sally" and "Misery."

And that led to his directorial debut in 1991 with "The Addams Family."

What was most challenging about coming out from behind the camera to work with actors?

"So for me, the biggest challenge was, would I know what to say when an actor would say, 'Why am I doing this?'" he said. "Then for me, what I learned is if you just tell actors to talk really fast, that solves everything."

"It's true, the faster an actor talks, the less chance they have to act. And for me, I hate watching acting. I just like watching reality," he continued. "So whenever I'm on the set, pretty much the only thing I'll ever say to an actor is, 'Let's do it again, like twice as fast.'"

Then he joked, "When I'm directing two actors, the thing I say to them is after a take, I'll come up to them and I'll say, 'One of you is very good.' And then I walk away, and they don't know which one I'm talking about. But boy, both of them try to do better."

Sonnenfeld tells a story in his book about a moment on the set of "The Addams Family."

"This is one of the worst moments of my life, and it was a hideous thing that I did and I admit that," he said.

There's a scene where Morticia, played by Anjelica Huston, gets a job as a pre-K teacher and is reading the story of "Hansel and Gretel" to the class. She tells it from the witch's perspective, and when the witch is pushed into the oven, Morticia asks the class, "Now boys and girls, what do you think that feels like?"

"And so I roll the cameras, and I say to the kids, 'Look sad, look amazed, look scared, look worried.' Cut. We've got it. I'm out of here," he recalled.

But his producer tracked him down and disagreed. He wanted the kids to cry. So Sonnenfeld went back in and asked the camera operators to start rolling, and then he addressed the group of 4-year-olds.

"You guys did a great job, he said. "The only thing you need to do now is get your measles shot and then you can go."

One child suggested he was just kidding, but Sonnefeld doubled down.

"And I did such a good job selling it that this adorable, curly haired, blond kid starts to cry. And when he starts to cry, all the other kids, because he was their leader, start to cry," he continued.

"And I've got all these great panning shots going from kid to kid, crying because I was so horrible," he remembered.

Sonnenfeld has gone on to direct many films, including three installments in the "Men in Black" series and "Get Shorty."

Could the next step in his career be for his own memoir to be optioned for the screen?

"Warner Brothers Television and Rob Reiner, who's a friend of mine, are in negotiation to option my book," he said.

"Unfortunately, because he's dead, we can't have Vincent Gardenia playing my mother," joked Sonnenfeld. "But we'll find an overweight, squat, hairy man to come in and play Mom."

Barry Sonnenfeld, Call Your Mother: Memoirs of a Neurotic Filmmaker

Barry Sonnenfeld, Call Your Mother: Memoirs of a Neurotic Filmmaker