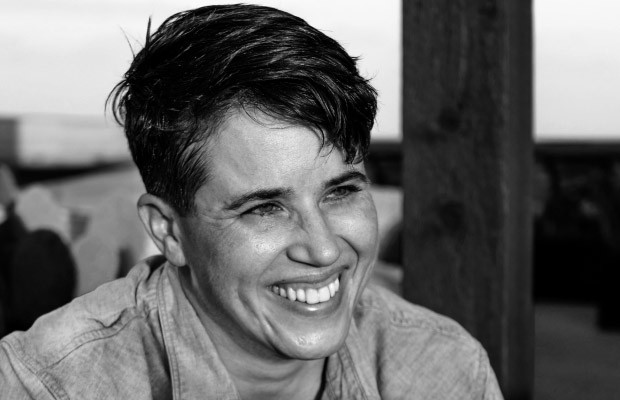 Near the end of 2018, Lauren Hough wrote a story for HuffPost. "I Was a Cable Guy. I Saw The Worst of America" was the headline. In it, Hough described the lows of her 10-year career fixing cable connections for irate customers.

The story went viral and led to the publication of her debut essay collection, "Leaving Isn't the Hardest Thing." Hough's book has received rave reviews, including this comment from writer Roxane Gay: "Hough's writing will break your heart ... This is one of those rare books that will instantly become part of the literary canon, and the world of letters will be better for it."

In her book, Hough explores the various identities she's inhabited over the course of her life. In addition to her 10-year career as a cable guy, Hough also served in the U.S. Air Force and worked as a bouncer at a gay club.

Hough was raised as a member of the Children of God cult, living in seven countries and West Texas. Actors Joaquin Phoenix, River Phoenix, and Rose McGowan also spent their youth as members of this cult.

The cult was founded by David Berg in Huntington Beach, California in 1968. It was originally called Teens for Christ before being renamed the Children of God. The Children of God founded communes in various cities and countries across the world. Members would evangelize in the streets and give out pamphlets. After a restructuring, the group changed its name to The Family of Love. It later shortened its name to The Family and is now known as The Family International.

"Berg waited until he had his followers completely dependent. He had them sever all ties. Most everyone had kids, no jobs, and now lived in foreign countries. His crowning message was simple: Anything in love was good. Which sounds like an Instagram caption. But it had a dark twist. Go out to nightclubs and lure rich men into bed. It's not prostitution if you tell them about Jesus."

"It really depended on where we were," Hough told WPR's "BETA" about her childhood and the cult. "My early years were pretty idyllic from my memory, living in campgrounds, and traveling around in Argentina and Chile was great."

She remembers there being a lot of other kids to play with and the fact that they were desperately poor.

"But you don't know that when everyone around you is poor," Hough said. "It wasn't fun at all. We spent most of our days either changing diapers and taking care of little kids and cleaning the house or out on the street selling posters."

In her book, Hough writes that it's entirely possible that the way she speaks and, by extension, the way she writes "developed in rebellion to Familyspeak."

"Familyspeak" refers to one of the punishments adults used to discipline children.

"If you spoke too loudly, if you were caught being foolish, telling a joke, and if you sighed when someone told you to do something — basically, if you were a teenager — you could get put on silence restriction, which meant you weren't allowed to talk at all," Hough explained.

Silence restriction could last for a day or for months. Thirty days was the longest Hough had to go without talking.

"It was really frustrating," she said. "Most of the kids in the home knew some made-up version of American Sign Language, just the alphabet, that we would use to talk to one another, but you couldn't get caught doing that. It's sad. I don't have words for not being able to say words. I think it's definitely a reason I became so outspoken later on. Realizing I could speak, realizing that I could handle the consequences if I do speak has been life-changing for me, and thankfully it happened early on."

Hough left the Children of God when she was 15 years old. A few years later, she joined the Air Force.

"It was, in my cult-raised mind, the logical next step," she said. "And most of it is I just wanted a way out of Amarillo, (Texas) and I consumed the commercials that we all did: join the Air Force, and see the world, and get a college education, and get a leg up."

She joined during the 1990s when the "don't ask, don't tell" policy was in full force. The law barred people who identified as lesbian, gay and bisexual from serving in the U.S. military if they acknowledged their sexual orientation. The 1993 law was repealed by Congress in 2010, effective in 2011.

As a gay woman in the military, Hough was surrounded by people who were homophobic.

"One of the great things about the military is it's such a wide diaspora of people who join. And most people my age were raised on MTV," she said. "We didn't have a problem with gay people. The problem came when all it really took was one person to have a problem with it."

"And I didn't really know what 'don't ask, don't tell' meant when I joined, I don't think a lot of people did," she continued. "We thought it was, 'You don't walk into your commander's office and say you're gay, you're fine.' But the problem with that one person is a lot of people were turned in by their exes as an easy way to hurt someone."

In her book, Hough says she doesn't like the word "family." But she did end up finding a family at the Washington, D.C. nightclub where she worked as a bouncer.

"I started thinking of them as family," she said. "We do that in the queer community, I think, especially because a lot of people do lose their families coming out. We developed sort of a pseudo-family."

Hough worked as a cable tech in the Virginia suburbs of Washington, D.C. for a decade. She said she made a service call to the house of former Vice President Dick Cheney. There was an assistant or security personnel who followed her around while she was checking signal levels and connections.

"The cable was going to be out for a while," Hough recalled. "The guy talking to me, it was sort of the, 'Do you have any idea who that man (Cheney) is?' And I was like, 'He can waterboard me if he feels like it.'"

Did Cheney react to her joke? "Well, if he did, I wasn't looking. I just walked out. I didn't want him to take me up on it."

Hough has had various identities over her lifetime, and each has come with some adjusting. But the most difficult, so far is embracing her new identity as a writer.

"My brain certainly is not built to absorb a lot of this," she said. "My brother has been saving all the clips, and he's the first person to know where I am on the best-seller list or if I'm on it ... And you don't want to be uncool about it on Twitter, but you definitely want to tell someone. So I get to tell my little brother. He's pretty impressed."

I don’t really have words for this yet. I’m headed to my brother’s to tell him. Before I do that:
This is because of indie bookshops, because of all y’all who bought the book and read the book and told your friends to read it. Thank you. From the bottom of my heart. Thank you pic.twitter.com/3OxRB7qXeb