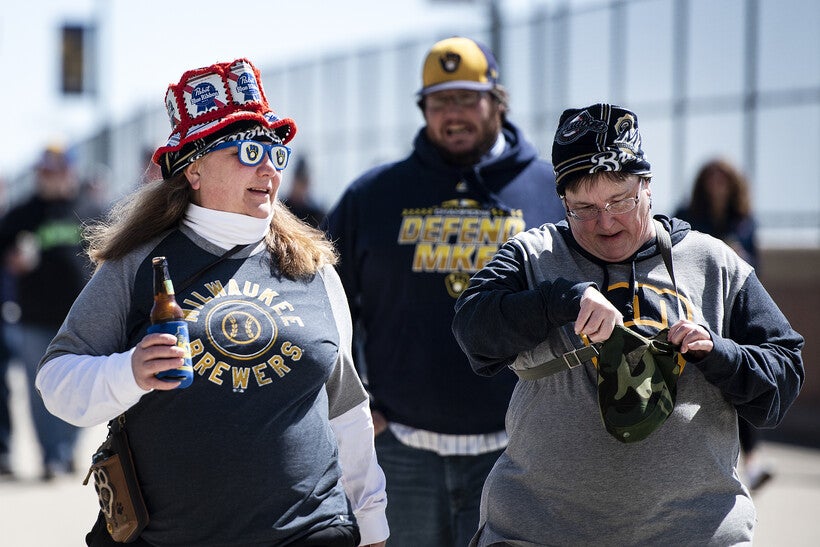 Wendy Scully of Franklin, Wis., left, wears Brewers sunglasses as she walks toward American Family Field to attend the Brewers’ season opener against the Twins on Thursday, April 1, 2021, in Milwaukee. Angela Major/WPR

The Milwaukee Brewers Came Back In the 9th And Won In Extra Innings
By Megan Hart
Share:

Fans were excited to return to American Family Field Thursday, and they got quite a treat on Opening Day.

The Brewers beat the Minnesota Twins 6-5.

It looked bleak for Milwaukee for much of the game. There were highlights, including a stunning line drive grab from shortstop Luis Urias to secure the first out, but the Brewers played mostly from behind.

In the bottom of the 9th, Milwaukee was down 5-2. With one out and two runners on, outfielder Christian Yelich hit an RBI single, scoring new Brewer Kolten Wong. Third baseman Travis Shaw hit a line drive double later in the inning to score Yelich and first baseman Keston Hiura and tie the game.

Closer Josh Hader brought the heat in the top of the 10th, striking out all three batters. And then it was Lorenzo Cain who started the bottom of the inning as the runner on second, an extra innings rule that started in 2020 and carried over to this year.

He advanced to third off a single by catcher Omar Narvaez, and he scored on a chopper from shortstop Orlando Arcia.

It was an exciting moment for fans, who enjoyed more than four hours of baseball Thursday, and for Cain, who sat out last season due to coronavirus concerns. 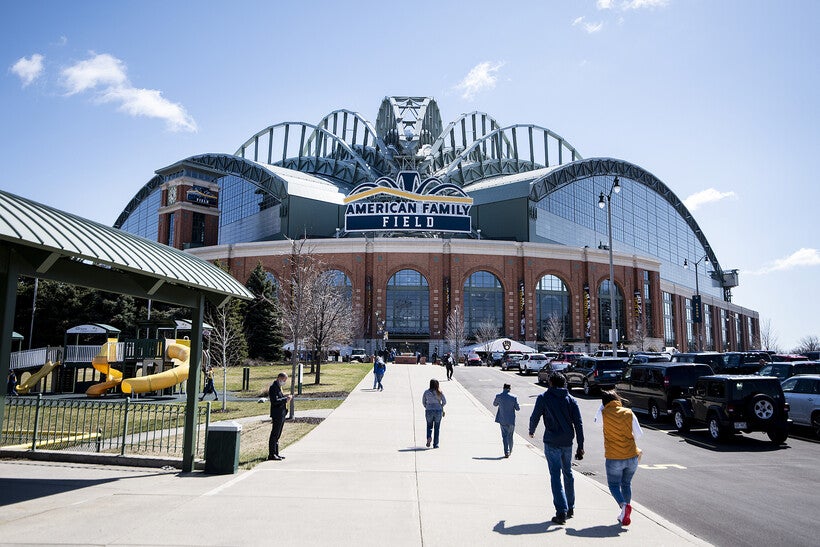 Thursday marked the first time American Family Field has hosted fans since 2019. Capacity was capped at 25 percent or about 12,000 people. Groups were seated together and socially distanced from others, masks were required and everything was cashless.

Tailgating was banned, though many fans sipped beers on the walk from their cars to the stadium.

On their way inside, fans said they were feeling pretty safe.

"It’s still baseball, and that’s the important thing," said Mark Swiggum, who has a 10-game pack for this season.

He traveled from Sun Prairie with a couple friends he met while working at American Family Insurance. They’re now retired, but it was still impressive to see their former employer’s name on the stadium formerly known as Miller Park.

Season seat holders, like Valerie and Jeff Ward, got first dibs for Opening Day tickets. Jeff has been coming to games since 1972, and they felt relief when the Brewers announced they’d welcome fans this season, he said. 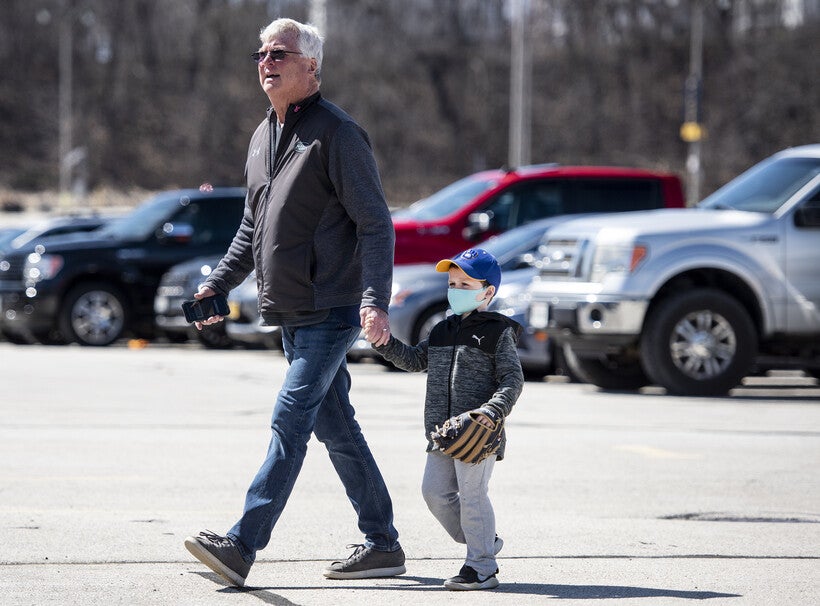 Theo Schmidt, right, walks with Bruce Wiring as they prepare to attend the Brewers’ season opener on Theo’s sixth birthday Thursday, April 1, 2021, in Milwaukee. “We've been waiting for this for a long time,” said Bruce. Angela Major/WPR

"We said, 'Hallelujah, baseball is back,'" Valerie said.

Major League Baseball played a short season last year — just 60 games — due to a late start caused by the pandemic. The Brewers struggled on offense but still reached the playoffs for the third consecutive year. That’s a franchise record they’ll look to break this season.

Ryan Andrews bought a 20-game ticket pack for this year. He took his dad to Opening Day. Andrews thinks it’ll be a good season for the Crew.

"Christian Yelich’s season was written off as big failure last year, but really that’s just a small slump in a 162 (game) season, so hopefully the Brewers can stay safe and keep this whole thing rolling all year," he said.

Yelich had two hits Thursday, including the single in the bottom of the 9th that was critical in Milwaukee’s comeback. Andrews thinks the Brewers have a chance to win the NL Central this year.

The Brewers host the Twins on Saturday and Sunday. Opening Day sold out, but individual tickets are available for other games through early May, according to the Brewers. 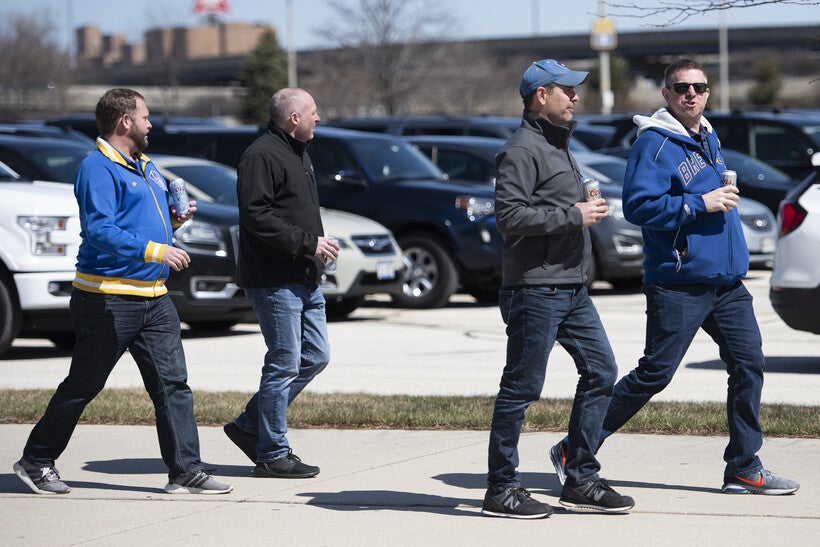 Fans drink beer on the walk from their vehicles to American Family Field on Thursday, April 1, 2021, before the Brewers’ season opener in Milwaukee. Angela Major/WPR