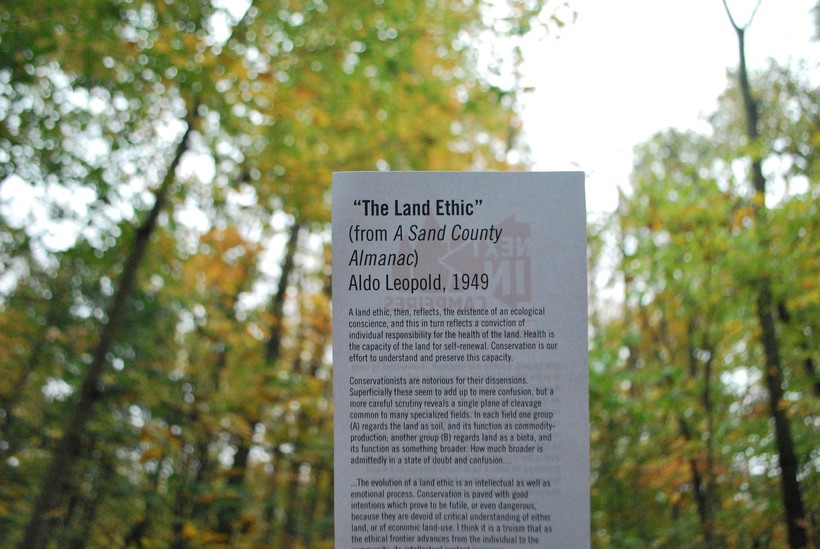 The Book Is Born, Twice

Experts On Aldo Leopold Tell The Story Of How His Famed 'A Sand County Almanac' Came To Be
By Melissa Ingells
Share:

Aldo Leopold was a professor at the University of Wisconsin-Madison, and his legacy is carried on by many people, one being Stanley Temple.

From 1976 to 2008, Temple was the Beers-Bascom Professor in Conservation in UW-Madison's Department of Forest and Wildlife Ecology — a position first held by Leopold. After Leopold, Joseph Hickey took the post until he was succeeded by Temple.

Temple was the science advisor to the Aldo Leopold Foundation Board starting in 1982 and is now a senior fellow there. He's the author of more than 330 publications on conservation and ecology.

Another scientist following in Leopold's stead is Curt Meine.

Meine is also a senior fellow at the foundation and an adjunct associate professor in UW-Madison's Department of Forest & Wildlife Ecology. He's also a research associate with the International Crane Foundation, and wrote the first full-length biography of Leopold, in addition to a number of books about conservation.

Meine also served as narrator and on-screen guide for the Emmy Award-winning documentary called "Green Fire: Aldo Leopold and a Land Ethic for Our Time."

Together, Temple and Meine tell the story of Leopold's famed book "A Sand County Almanac" — a book that was born twice.

"A Sand County Almanac" went through a number of rejections before Oxford University Press agreed to publish it in early 1948. Leopold found out the book had been accepted about two weeks before he died. Then it languished for nearly 20 years until the paperback version came out.

The Historical Context Of 'A Sand County Almanac'

Curt Meine: The mood and context of this is that it's the postwar years and let us say the global community of thinkers was wrestling with the aftermath of World War II.

It's a dark and challenging time. And in the summer of 1947, he (Leopold) is really working hard to compose this, what becomes the capstone essay, called "The Land Ethic," the summary of his conservation philosophy. And you can see him struggling.

He felt a responsibility to share the significance of this new way of seeing how nature works, and how our relationship to nature changes as a result. And to show that once you have this new way of perceiving the inner workings of nature — sometimes he would call it the drama of the landscape — that then everything else followed from that. And that it was important to do that not just if you were a professional conservation scientist or a land manager or whatever, but if you were a citizen.

How The Book Found Its Audience In The 1960s

Stanley Temple: In 1966, I always say it was either brilliant marketing or just plain dumb luck that they came out with a paperback edition. Just at the very time when the modern environmental movement was getting launched. And suddenly almost 20 years after Leopold had written the book, there was an audience ready to read this book and fully understand its significance.

And since then, it's been translated into, I think, now, 14 different languages, millions of copies have sold, it has been a small cottage industry of people writing about the ideas that Aldo Leopold expressed in "A Sand County Almanac."

This story is part of a special series being aired on WPR's "Morning Edition," by host Melissa Ingells. Throughout the summer, she will look at the reasons "A Sand County Almanac" is still relevant 70 years after being published. For more, visit www.wpr.org/leopold.