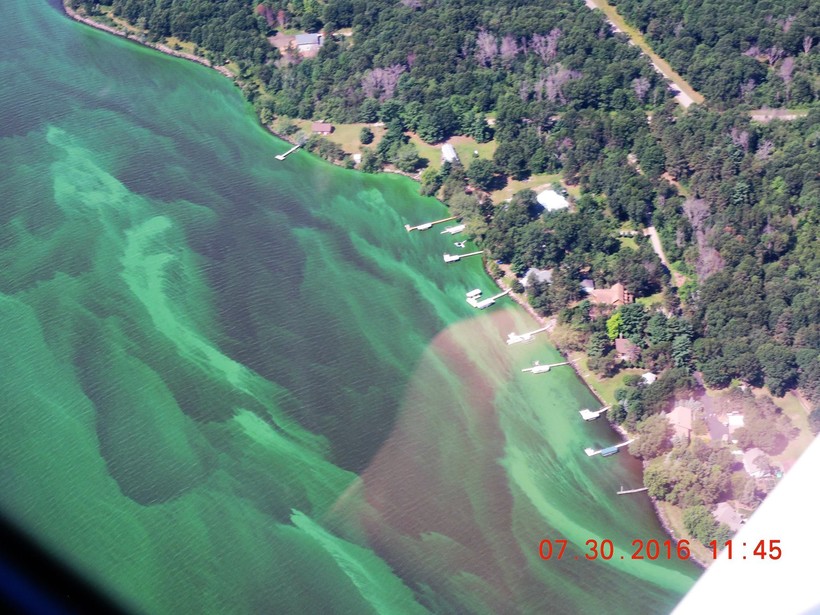 Blue-green algae blooms surround the shoreline and docks of Lake Petenwell in this July 30, 2016 aerial photo.

There is less toxic blue-green algae this year on Lake Petenwell, the Castle Rock Flowage and some smaller central Wisconsin lakes.

Last year, homeowners on the recreational lakes described the algae bloom on Lake Petenwell as the worst in memory. Aerial photos taken July 30, 2016 showed the shoreline and boat docks surrounded with an iridescent green slime.

"Last year on one of the inland lakes there was a family that got sick and a dog that died from ingesting blue-green algae," Evans said.

But this year is different, Evans said. "There's been a lot fewer reports, and I've certainly seen a lot less," she said.

Evans said the lower temperatures and wetter conditions this summer may have been factors in improving water quality.

"We've had such a cool summer, and a lot of rain," she said. "That means the water is moving and it's cooler, so we're not having those hot, still conditions that the blue-green algae like."

But Evans warns there are still patches of blue-green algae on area lakes, and they should be avoided.

Blue-green algae is actually bacteria that can cause rashes and respiratory ailments in swimmers, and serious illness if ingested.