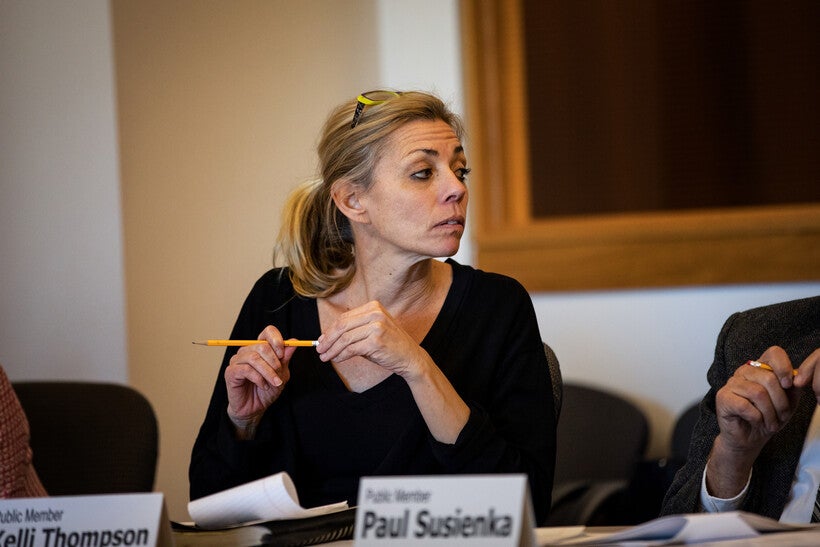 State Public Defender Kelli Thompson is seen at the Oct. 16, 2018, meeting of the Legislative Study Committee on Bail and Conditions of Pretrial Release. At a December 2018 meeting, Thompson, a member of the committee, remarked, "We have people every single day that are being put in custody on high cash bail based on poverty alone." Emily Hamer/Wisconsin Center for Investigative Journalism

A bipartisan group of lawmakers are sponsoring a bill that would increase merit-based pay for public defenders by roughly $4 million over the next two years.

The two-year budget approved in July by lawmakers and Gov. Tony Evers included around $4.5 million to fund merit-based pay increases for assistant prosecutors. About $1.2 million will go to pay progression for assistant public defenders.

"If they’re able to work in the criminal justice system and make more money, it will be hard for me to keep them," said Thompson.

Rep. Amy Loudenbeck, R-Clinton, and Sen. Jerry Petrowski, R-Marathon, are lead authors of a bill that would provide around $4 million more for public defender pay over the next two years. Loudenbeck said the budget made significant investments in the criminal justice system, including additional positions for prosecutors and raising the private bar rate from $40 to $70 an hour.

"We can’t always fund every priority that we have," she said. "We made a substantial investment in all three legs of the criminal justice stool, but leaving this one out really deserves a second look."

"We do not want backlogs of cases," he said. "If the Office of the Public Defender is having problems filling positions or maintaining the people they have because the pay is lousy, now all that does is delay justice for victims and it delays our caseload here."

Thompson agreed the loss of an experienced public defender may have ripple effects across the justice system. She added some areas of Wisconsin have one public defender office with attorneys who represent multiple counties.

"It is extraordinarily complicated in our smaller, more rural offices where we just don’t have a significant number of staff," said Thompson.

"That’s what is best for our system in general and most affordable," said Tusler. "To have great attorneys that get the job done right the first time."

A spokeswoman for Evers said he supports the legislation. Staff for Assembly Speaker Robin Vos, R-Rochester, and Senate Majority Leader Scott Fitzgerald, R-Juneau, did not immediately respond to a request for comment Tuesday on the legislation.