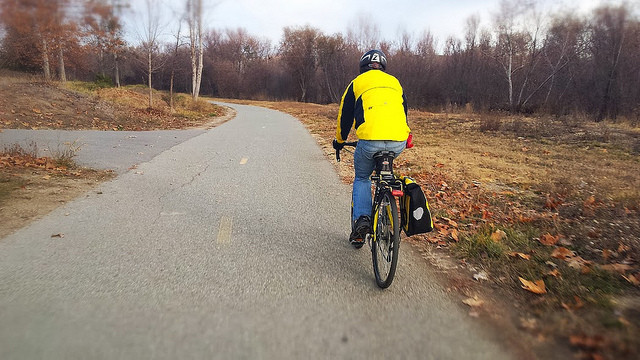 Late Addition To Budget Left In By Walker
By Chuck Quirmbach
Share:

The new state budget includes an item disappointing to bicycling advocates and some local officials. The critics say development of bike trails and pedestrian walkways could be harder to achieve.

Two weeks ago, the state legislature's Joint Finance Committee quietly inserted several provisions in the budget. One would prohibit the state Department of Transportation and local governments from using their power of condemnation to establish or extend recreational trails, bike lanes and pedestrian walkways.

While eminent domain gives the government the right to take private property for public use, condemnation is the legal process used by local governments for such a taking, on the grounds that just compensation will be provided.

Dave Cieslewicz, executive director of the Wisconsin Bicycle Federation and former Madison Mayor, says the item could have big consequences. "New projects could be made more expensive or scrapped all together. It could mean existing sidewalks and bicycle lanes could go away in the future," Cieslewicz said.

The Bike Fed and some local officials asked Gov. Scott Walker to veto the change in condemnation authority, but Walker left it in.

Two Rivers City Manager Greg Buckley says the provision cuts into a long practice of local use of eminent domain, or condemnation.

"It's both frustrating from a policy standpoint and hard to understand why bike and pedestrian facilities have now been carved out as some sort of pariah public use that doesn't rise to the level where this tool can be employed when necessary," Buckley said. He added that a bike and pedestrian trail being planned to go to Two Rivers High School may be in jeopardy.

On Friday, Madison City Attorney Michael May filed a public records request seeking details of the finance committee action. Walker's office did not respond to a request for comment.