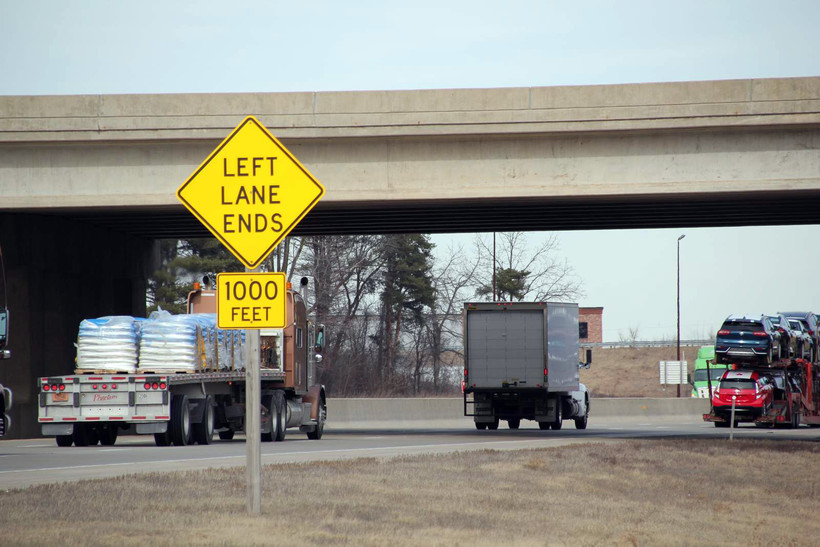 Drivers on I-39/90 headed northbound from Illinois merge as the highway goes from six lanes to four at the Wisconsin border.

Politicians have a soft spot for press conferences and ribbon cuttings to promote road projects, and an expansion of Interstate 39/90 south of Madison to the Illinois border has set off its share of celebrations.

"Quite frankly, we can’t afford not to do this," said former Assembly Speaker Mike Sheridan, a Janesville Democrat, at a 2010 press conference celebrating former Democratic Gov. Jim Doyle’s plan to pursue the I-39/90 expansion. Gov. Scott Walker holds a 2016 press conference next to I-39/90 to introduce the DOT's latest budget. Shawn Johnson/WPR

"It’s a way for agricultural and manufactured goods to get to market," said then-Wisconsin Department of Transportation Secretary Mark Gottlieb in 2012 at a press conference celebrating the start of the project’s construction.

"It’s incredibly important to the district I represent in Rock County and also to the rest of the state," said Republican state Rep. Amy Loudenbeck in 2016 after yet another press conference, this one featuring Gov. Scott Walker.

Walker used a section of the highway near Edgerton as his backdrop in 2016 to announce the DOT’s latest budget, signaling that even at a time when the state transportation dollars were scarce, the widening of I-39/90 from four lanes to six would remain a priority.

Despite today’s hyper-partisan political climate, Republicans and Democrats have both managed to agree on the plan to widen this stretch of interstate.

But at a time when the state finds itself struggling to pay for roads, the I-39/90 project is one of many that have been plagued by cost overruns. The project was estimated in 2011 to cost $715 million, but a recent audit found that in just five years, costs has grown to $1.2 billion. That doesn’t even include a $550 million rebuild of an interchange in Madison.

"It's not just isolated to this project," said Ashwat Narayanan, the transportation policy director for 1000 Friends of Wisconsin, an environmental group that has long scrutinized big highway projects. "This is a pattern that we're seeing all across the state. I think we have to take one step back and maybe ask ourselves if all the money we're throwing into these huge projects is actually necessary." Not everything state government does is easy to grasp, but people notice roads, and in the case of I-39/90, drivers headed north from Illinois can see firsthand what a few years and a few billion dollars will do for a state when it comes to building highways.

The Illinois side of the interstate is six lanes of concrete, three lanes in each direction. It’s flat, well-lit and finished.

As drivers cross the state border on their way to Wisconsin, they immediately merge to a four-lane highway. The pavement is rougher. Construction equipment sits dormant for winter. Chunks of concrete and rebar litter some ditches.

"It's funny, when you cross the Wisconsin border, there might as well be a sign saying here's where the modern highway infrastructure ends," said Dan Cunningham, vice president of the group Forward Janesville. "You get to Illinois and it's just three lanes of really smooth traffic heading down to Chicago. And then you get into Wisconsin and it's ca-chunk, ca-chunk, ca-chunk."

Cunningham’s group began pushing to add lanes to I-39/90 nearly a decade ago. As he looked at the highway recently from the side of a newly constructed overpass, he said the project offered the promise of economic growth for his city.

"I think it’s going to be terrific to just be able to say, hey we’ve finally arrived here," Cunningham said. "This is the state’s front porch, really."

Truck drivers stopped at the Wisconsin Welcome Center just north of the border had mixed feelings on the state of Wisconsin roads. While the Illinois and Wisconsin stretches of this highway are dramatically different, some drivers said Wisconsin’s roads compare well to other states.

"From here to the Dells it needs attention," said Schroeder. Schroeder hauls expensive RVs and said he worries about getting them home undamaged. Still, he said he’s not about to avoid this stretch of highway.

"Probably not, but eventually there is another road," Schroeder said. "It might be a little further, but there’s always another way to get there."

But the DOT has warned that if current funding trends continue, 19 percent of Wisconsin’s "backbone" highways will be in poor condition a decade from now.

In the recent past, it was relatively easy for lawmakers and governors to approve big road projects like I-39/90, but circumstances are different this year, which means other major projects could be delayed or even cut.

A variety of factors are driving that. The state hasn’t raised the gas tax or vehicle registration fees in roughly a decade, and it’s borrowed so much that paying off old debt now eats up nearly one-fifth of all transportation revenue. Meanwhile, state government continues to build, and costs for projects like I-39/90 have ballooned.

The Wisconsin Legislative Audit Bureau found the price-tag for 16 ongoing major highway projects had more than doubled, from $2.7 billion when they were originally approved to $5.8 billion by August 2016.

"Going and giving them more money would be absolutely the wrong thing to do at this point," said Republican state Sen. Chris Kapenga of Delafield during a recent meeting of the state Legislature’s Joint Legislative Audit Committee.

Democrats chimed in, too.

"God bless Janesville, but my constituents say to me, 'Why do we need eight lanes in Janesville?'" said Democratic state Sen. Kathleen Vinehout, referring to an even wider section of I-39/90 planned for the city. Vinehout, who is from Alma, represents western Wisconsin counties with some of the worst road conditions in the state.

Critics of Wisconsin’s tendency to expand highways argue the state should focus instead on improving the roads it already has.

"There’s no question that a lot of our interstate network is coming to the end of its useful life and must be reconstructed," said Narayanan of 1000 Friends of Wisconsin. "It really is a question of priorities. Are we fixing what we have first instead of investing money in these massive highway expansions?"

Narayanan favors more emphasis on rail instead of highways. His group has unlikely allies on the right, but they’ve been drawn into the road-funding debate for different reasons. Americans For Prosperity-Wisconsin is fighting road spending to try to stave off tax increases.

"It’s hard for anyone to come to the conclusion that it’s the time to throw more money at these problems," said AFP-Wisconsin director Eric Bott.

Under Walker’s proposed 2017-19 budget, one big project that has long been a priority of business groups would be cut: an expansion of Interstate 94 west of Milwaukee between the Marquette and Zoo interchanges. Other projects, like an expansion of I-94 south of Milwaukee, would be significantly delayed.

Even the plan to make I-39/90 six lanes — which is underway — will take at least another five years to complete under the Wisconsin DOT’s timetable. As truck traffic roared by on I-39/90 during a recent interview, Forward Janesville’s Cunningham treaded carefully when asked why his region’s project should continue despite significant cost overruns.

"Oh, boy," Cunningham said. "So it’s time to pit ourselves against everyone else?"

But Cunningham conceded it’s an argument he’s had to make often given the state of Wisconsin’s transportation budget, and he made it again, launching into a sales pitch about the interstate’s importance to Wisconsin commerce and tourism.

This story is part of a WPR series on transportation funding that explores how we got here and what happens next. Read part one here.