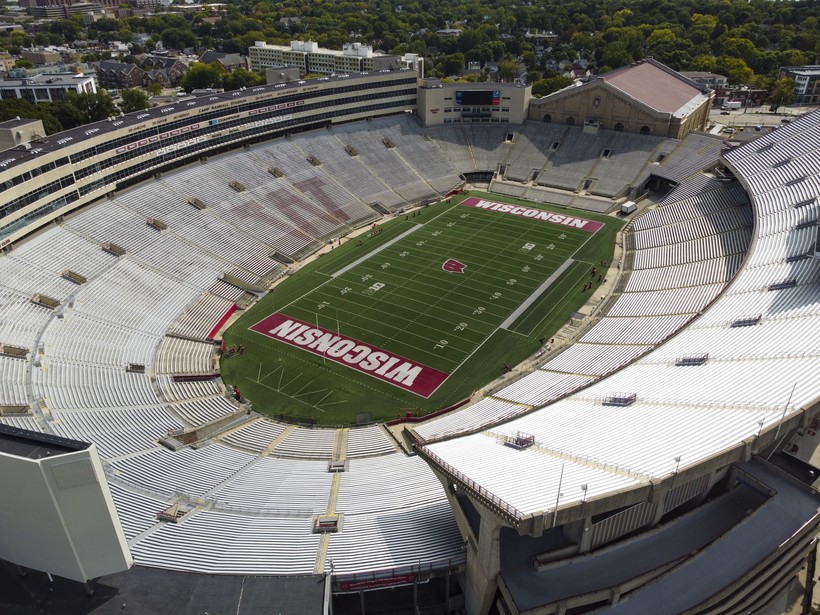 Camp Randall Stadium, home of the Wisconsin Badgers, is seen Thursday, Sept. 17, 2020, in Madison, Wis. Less than five weeks after pushing NCAA college football and other fall sports to spring in the name of player safety during the pandemic, the conference changed course Wednesday, Sept. 16, 2020, and said it plans to begin its season the weekend of Oct. 23-24. Morry Gash/AP Photo

Big Ten Football To Open With Badgers On Oct. 23

For months, the fate of the Big Ten’s fall football season remained uncertain, but now Wisconsin Badgers fans have a day to circle on their calendars.

Wisconsin will host Illinois at Camp Randall Stadium on Friday, Oct. 23, the conference announced Monday. The showdown marks the return of Big Ten football amid the coronavirus pandemic.

The Badgers are ranked No. 16 in the AP Poll despite not having played a game. Last season, they reached the Rose Bowl, where they lost to Oregon.

Six other conference games will take place Saturday, including No. 6 Ohio State against Nebraska. Penn State, Michigan and Minnesota will also start their seasons in the AP Top 25.

Head coach Paul Chryst said the Badgers will look different this year, having lost several players to the NFL, including record-breaking running back Jonathan Taylor.

Wisconsin will also open the season without quarterback Jack Coan, who recently underwent surgery after injuring his foot in practice. He’s out indefinitely.

In the meantime, redshirt freshman Graham Mertz will fill the role of starting quarterback. Mertz was a hotly recruited high school athlete with offers to play at Clemson and Alabama, currently the two top-ranked teams in the country.

Before a date was set for the Badgers’ first game, the University of Wisconsin-Madison announced there would be no spectators at Camp Randall Stadium until further notice due to the state’s recent surge in coronavirus cases.

The Big Ten isn’t selling tickets this season. Families of players and staff were originally going to be allowed to attend games at Camp Randall, but now the stadium is only welcoming essential personnel. Tailgating is also prohibited, and parking lots will be open to faculty and staff members only.