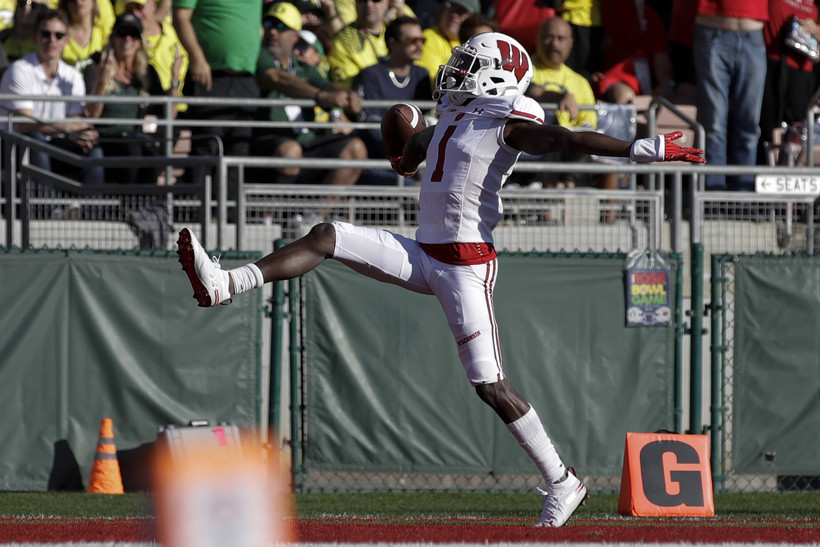 Wisconsin wide receiver Aron Cruickshank celebrates after returning an Oregon kickoff 95 yards for a touchdown. It was the third kickoff return for a touchdown in Rose Bowl history. Marcio Jose Sanchez/AP Photo

The University of Wisconsin-Madison fell just short of winning "the Granddaddy of Them All" on Wednesday.

The No. 6 Oregon Ducks beat the No. 8 Wisconsin Badgers 28-27 in the 106th Rose Bowl in Pasadena, California. It was a back-and-forth game, but the Badgers just couldn't hang on against the Ducks.

Wisconsin has played in the Rose Bowl four times in the last 10 seasons, but it hasn't won the game since 2000.

Oregon’s offense, led by quarterback Justin Herbert, opened the game with a 12-play, 75-yard march down field. Herbert, who's expected to be an early pick in the 2020 NFL draft, completed four passes for 49 yards and finished off the drive with a 4-yard touchdown run.

But Wisconsin answered quickly. Sophomore wide receiver Aron Cruickshank returned Oregon's kickoff 95 yards for a touchdown. It was just the third kickoff return for a touchdown in Rose Bowl history. Wisconsin tied it up with an extra point, and the Badgers didn't let up. On the first play of Oregon's next drive, inside linebacker Jack Sanborn intercepted a pass from Herbert deep in Duck territory. Collin Larsh kicked a 44-yard field goal to put the Badgers up 10-7.

Wisconsin's defense seemed to get in a rhythm after the interception. Oregon went three-and-out on its next possession. On the following Oregon drive, safety Eric Burrell sacked Herbert for a 7-yard loss. Wisconsin's defense has gotten to quarterbacks all season. The Badgers finished with 51 sacks on the year, the most in school history. They successful contained Oregon running back C.J. Valdez but struggled to stop Herbert on the run.

"They've played a lot of games, he's played a lot of football in his career," Sanborn said. "That's not the first game that he's ran with the ball, used his legs, so it's something we knew that he had."

Badgers running back Jonathan Taylor got going late in the first quarter. Taylor has had one of the most successful careers in college football history. He had 94 yards on Wednesday, making him just the third college football player ever to record 2,000 rushing yards in multiple seasons. A junior, Taylor is expected to declare for the 2020 NFL draft. 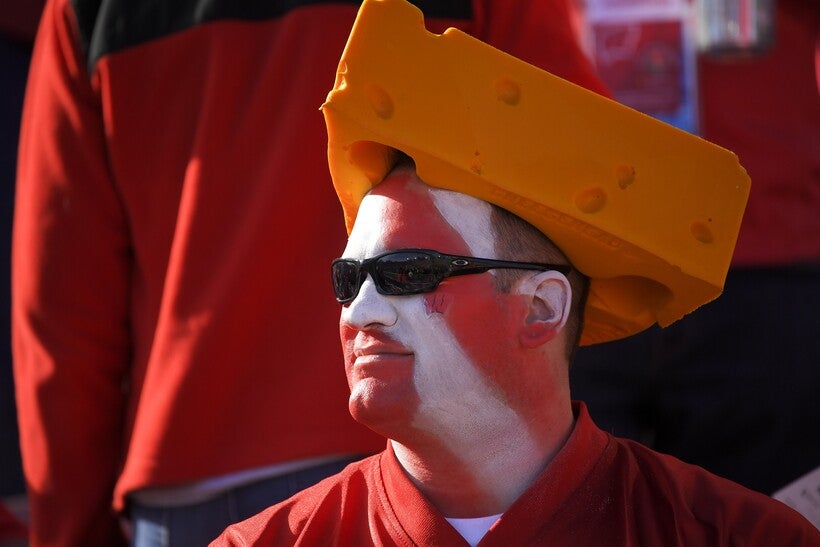 A Badgers fan watches the team warm up before the 106th Rose Bowl. Attendance was about split between Wisconsin and Oregon fans. Mark J. Terrill/AP Photo

Wisconsin had almost 90 yards of penalties. Fouls slowed down a promising second-quarter Badgers drive, which ended with a missed 47-yard field goal. Wisconsin struggled with turnovers, too.

Taylor had his sixth fumble of the season with just under 10 minutes left in the first half. Oregon recovered the ball at Wisconsin’s 43-yard line, but the Badgers defense made a stop on fourth-and-1. Wisconsin quarterback Jack Coan threw an interception late in the second quarter that turned into Herbert’s second rushing touchdown of the game to put Oregon up 14-10.

"When you have those things happen in a game, it will definitely hurt you," Taylor said. "Possibly slim chance you could win, but definitely put you in a tough position when you have self-inflected penalties, special teams problems, turnovers."

But Coan led the Badgers on a quick drive, helped along by a big pass interference call against Oregon, that ended with an 11-yard touchdown pass to junior wide receiver Quintez Cephus. The Badgers took a 17-14 lead into the locker room at the half.

Cephus had a strong performance. He finished the game with 59 yards receiving.

"I just wanted to do any and everything for the guys in this locker room to try to help us come out on the winning side of things," he said after the game.

The lead didn't last long for the Badgers. Wisconsin punter Anthony Lotti dropped a snap that Oregon’s Brady Breeze returned for a touchdown early in the third quarter. Breeze was a difference maker in Wednesday's game, later forcing a fumble. Wisconsin answered with an 11-play, 65-yard drive that included big plays by Cephus and Taylor. It ended with a touchdown by full back Mason Stokke and a Badgers lead of 24-21.

Wisconsin added a field goal with 12:09 left to play and had another big sack in the fourth quarter to force an Oregon punt. The Ducks managed to down the ball at the Wisconsin 4-yard line and soon forced another Wisconsin turnover. Wide receiver Danny Davis fumbled, and Oregon recovered the ball deep in Wisconsin territory. On the next play, Herbert had his third rushing touchdown of the game to give the Ducks a 1-point edge that they'd hold onto.

Wisconsin has a rich Rose Bowl tradition. This was the 10th appearance for the Badgers. Heading into Pasadena, Wisconsin had won five straight bowl games. That was the longest streak in Big Ten history.

It was a beautiful day for football. The weather in Pasadena at kickoff was 66 degrees with clear skies, a nice treat for those who traveled from Wisconsin for the game. The crowd was about evenly split between Badgers and Ducks fans. The official attendance was 90,462.

Oregon and Wisconsin last faced each other in the 2012 Rose Bowl. The Ducks edged out the Badgers 45-38 in the highest scoring game in the bowl's 106-year history.