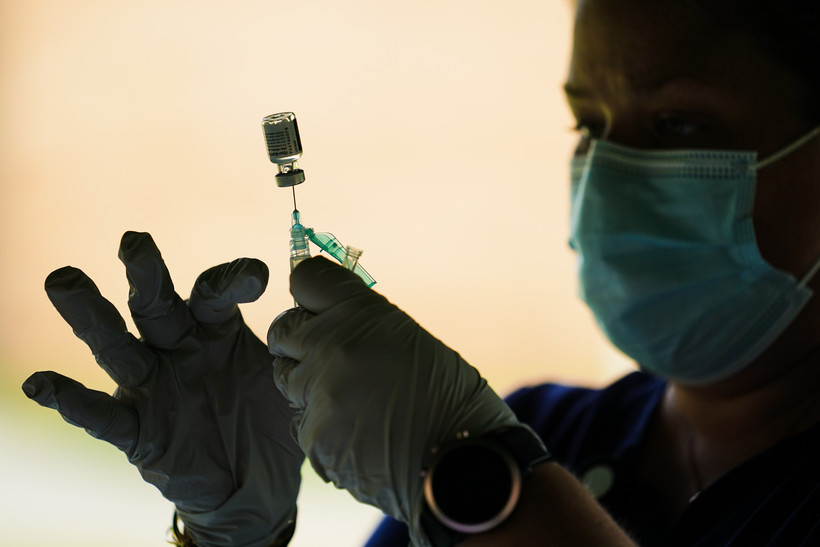 In this Sept. 14, 2021 photo, a syringe is prepared with the Pfizer COVID-19 vaccine at a clinic at the Reading Area Community College in Reading, Pa. President Joe Biden has directed OSHA to write a rule requiring employers with at least 100 workers to force employees to get vaccinated or produce weekly test results showing they are virus free. Matt Rourke/AP Photo

Beyond A Mandate: Mercyhealth Begins Charging Fee To Unvaccinated Employees

Mercyhealth in Janesville is among many employers across the state imploring their staff to get vaccinated against COVID-19. But recently, the health system took another step: fining employees who haven't gotten the vaccine.

The monthly fees for the unvaccinated, announced Sept. 14, range from $60 to $265 per month and are based on the employee’s salary.

"We require all of our staff, in all they do each day, to assure patient safety while serving our patients. The new policy provides employees a choice, while also encouraging them to get vaccinated and the requirement of weekly testing and masking at all times assures patient safety," said Javon Bea, president and CEO of Mercyhealth, which serves Wisconsin and Illinois.

But other hospital systems worry a fee-based system could result in staff quitting, especially during a time when many hospitals are short-staffed.

Vaccine mandates at hospitals and other businesses across the state have already gotten pushback from some employees.

"I think a lot of companies are saying the cost of having them here outweighs the cost of replacing those who will leave because of a mandate," said Jirs Meuris, assistant professor at the University of Wisconsin-Madison School of Business who also serves as a faculty affiliate at the Institute for Research on Poverty and the Center for Financial Security.

According to Mercyhealth, the fees are meant to offset the added risk of unvaccinated employees becoming seriously ill with COVID-19, requiring around-the-clock care and missing work.

The Wisconsin Hospital Association did not have definitive data on how many other health systems are instituting fees for unvaccinated workers. But hospitalizations among those unvaccinated are on the rise.

According to a Kaiser Family Foundation study, about 287,000 unvaccinated Americans were hospitalized from June through August, costing the health care system $5.7 billion.

The Evers administration's announcement that it would require tens of thousands of state employees to be vaccinated against COVID-19 by Oct. 18 or face weekly testing was met with fierce opposition by a Republican leader who said he intended to fight it.

After hospitals in the state started announcing plans requiring staff to be vaccinated against COVID-19, protests sprung up around the state, including at the state Capitol.

Most states, including Wisconsin, have At-Will employment, which means an employer can fire a worker for basically any reason that’s not protected under the law, said Meuris.

But many organizations are using a softer approach, trying to increase COVID-19 vaccination through incentives.

In July, the University of Wisconsin System announced it would offer $7,000 scholarships to 70 vaccinated students attending campuses with a vaccination rate of 70 percent or higher.

So far, only UW-Eau Claire, UW-Lacrosse and UW-Madison have reached or exceeded that level of vaccinations. UW-Madison, however, is not participating in the 70 for 70 campaign.

According to one recent study, lotteries and other incentives offered by 24 states were not associated with a significant change in COVID-19 vaccination rates.

"More substantial incentives or mandates may be necessary to raise vaccination rates," the study by the Perelman School of Medicine at the University of Pennsylvania said.

The study, which has not been peer-reviewed yet, did not analyze Wisconsin incentives, which included a free cream puff at the State Fair and more recently $100 debit card.

The $100 incentive was originally available from Aug. 20 to Labor Day, but due to a steady spike in vaccinations the Evers administration announced Sept. 3 that the reward program would be extended to Sept. 19.

More than 65,000 Wisconsin residents got their first dose in the 13 days after Evers announced the program, according to Channel 3000.