WPR
WPR News Series 2015
Planning For The End Of Life 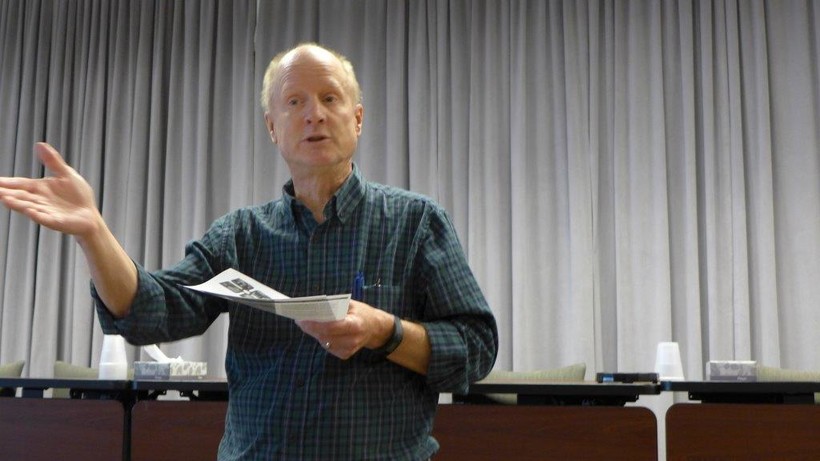 Attorney Ben Adams, speaking to the State Bar about advance directives, says one of the areas that he specializes in is end-of-life issues.

Surveys Say While Majority Of People Want To Die At Home, Just 1 In 4 Do
By Shamane Mills
Share:

Surveys indicate most people these days want to die at home, but it's estimated that only 25 percent of Americans actually do.  Instead, many live their last days in a hospital, nursing home or long-term care facility.

Filmmaker Michael Bernhagen said that he was so moved by his mother's death that he made a documentary about a subject that few want to talk about. His own unease with death reflects that of the general population.

"I'd never been in the presence of a dying person before so I had no idea what to do. And thankfully, my intuition told me that I should sit down by my mom's hospital bed and hold her hands," Bernhagen said.

His mother had advanced vascular dementia and Bernhagen wasn't even sure she recognized him.

"But, something about the look in her eyes was telling my heart otherwise and she started kissing my hands and stroking my face and all of a sudden released my hands and made a gesture, as if she said, 'Come in, I have something to say to you, lean in a little closer.' And staring me deeply in the eyes, she uttered four simple words. I didn't know it at the time but it would change the course of my life. Those four simple words were 'I always loved you,' " he said.

Bernhagen said she'd never told him that. He added that the experience taught him what matters to most people at their end of lives has little to do with medicine and a lot to do with relationships.

Medical technology can prolong life in cases that wouldn't have been possible in the past. Attorney Ben Adams said that he reminds people of this when he talks to groups about advance care planning.

"This is the last 35 years when medical technology made those leaps to where they can keep us from dying or bring us back from the dead, but they can't restore our health," he said.

John Maycroft, who directs the Honoring Choices program for the society, said that their effort is designed to bring important and highly personal questions into focus.

"Really, it's about values and what is important to that person," he said. "So, for me, for example, I have a 3-and-half-year-old son and if I can watch him smear yogurt on his face for 30 minutes every morning, I hardly care what the rest of my day looks like. I don't want to be in screaming pain, I want to be able to communicate, but for me, the priority is to watch my son grow up. And if I have to go through medical misery and back to get there, that's worth it to me."

He said that these initial conversations between people and their loved ones are designed to get people to think who their health care agent should be or whether they want to write down their wishes.

Honoring Choices Wisconsin started in 2012 with six health systems. Maycroft said that it now has 25 organizations on board.

"The progress has been extraordinary. It's been more successful than we  ever imagined. It's also been a lot harder and slower than we imagined," he said.

The Medical Society got behind this effort after seeing "Consider the Conversation," a series of documentaries about end-of-life issues by Bernhagen and Terry Kaldhusdal.

"We at the society didn't know what we were going to do," Maycroft  said. "We didn't know how to do it. But, it was clearly something where something needed to be done."

It makes sense the medical community would get on board since medical facilities are where more and more Americans are dying.

"If there's one thing that Terry Kaldusdal and I have learned from producing the 'Consider the Conversation' films over the last 6 years, it's that our success at fighting disease and extending life has created a new problem," Bernhagen said.

He said that success has fundamentally changed how and where Americans die.