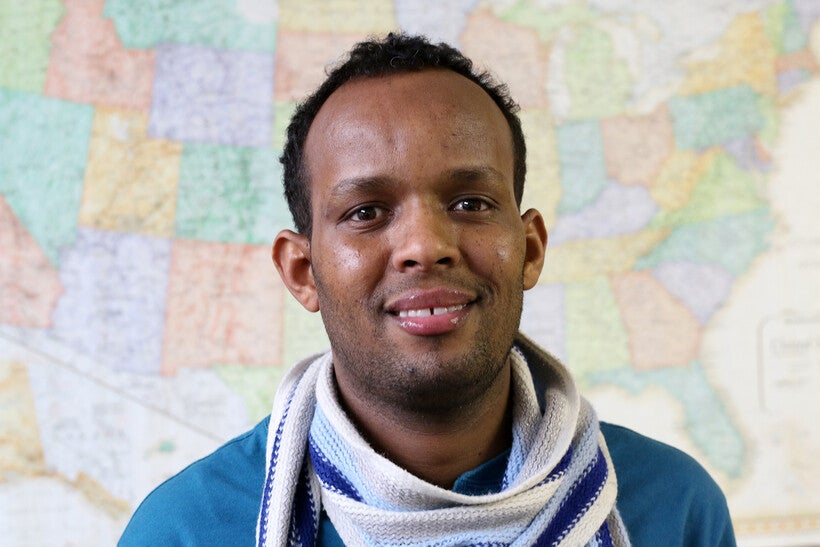 Isaak Mohamed is the first Somali refugee to run for city council in Barron, Wis. He came to the U.S. in 2013 after fleeing civil war in Somali and living in a refugee camp in Uganda. Rich Kremer/WPR

Residents Call Candidacy A Major Step For Somali Refugees Who Began Moving To City 20 Years Ago
By Rich Kremer
Share:

Voters in the small, northern Wisconsin city of Barron will take part in a historic election on Tuesday. That’s because for the first time since Somali refugees began settling there 20 years ago, a Somali-born American is running for city council.

In February, news broke that three candidates were running for an open, at-large city council seat. But what set this race apart was the fact that two of the candidates were Somali refugees who had recently become U.S. citizens.

Somalis have been part of Barron since the late 1990s when they began moving to the city to work at the region’s largest employer, the Jennie-O Turkey Store production plant. The U.S. Census in 2000 counted 20 Barron residents who were black or African-American. As of the last census, there were 334 residents listed as black or African-American, which accounted for nearly 9 percent of the city's population of 3,400 residents.

And the community has been growing. Since 2005, the Barron Area School District saw the number of students listed as black more than triple to 164 during the 2018-2019 school year.

Bob Kazmierski, Barron's city administrator, said the city is working on outreach to ensure that Somali residents are fully counted during the upcoming 2020 U.S. Census. Prior to February's primary, while standing inside the city council chambers, he said the Somali community has a large presence in Barron and it's exciting to see them taking step to become city leaders.

"We’re standing here in city council and on that wall there is the history of every mayor," Kazmierski said. "You see their pictures there and, you know, they’re all older, white gentlemen. So to have three candidates willing and able to run for city council particularly in an era where it’s hard to get folks engaged in the public sector is really a great positive. And for two of the three to represent our Somali neighbors can only bode well for us going towards the future."

The February election narrowed the field down to Mohamed and Solie.

Mohamed moved to Barron in 2013 to work at the Jennie-O Turkey Store, but now works as a liaison for the Barron Area School District. His reasons for coming to the U.S. echo similar stories shared by many of the African refugees in Barron.

"I was a refugee because of the civil war that was happening in Somalia," said Mohamed. "I had to leave. It didn’t mean that I liked to leave, but I was forced to leave and I was a refugee in Uganda for quite a while and that’s where I pursued my education."

Mohamed said he fled in 2006 and lived in a Ugandan refugee camp for three years. He then moved to the capital city of Kampala where he worked as a translator for a non-governmental organization called InterAid Uganda. While in Kampala, he also got a bachelors degree in social work from St. Lawrence University Uganda.

In 2013, Mohamed said he was picked for resettlement in Albuquerque, New Mexico after being granted asylum by the U.S. After two months, a friend recommended he move to Barron, where he could find work at the Jennie-O Turkey Store or as a translator. In November, 2018, Mohamed became a U.S. citizen. He said he wants to use his experiences abroad and within the Barron school district to help bridge the gap in Barron between Somalis and the rest of the community.

Solie grew up in Barron, graduating from the local high school in 1974. He spent time dairy farming 2 miles north of Barron and held various other jobs including a 10-year stint as superintendent of water and sewer operations for the nearby Village of Grantsburg. In 1990, Solie traveled to Zaire for missionary work with the Covenant Church, during which he helped with local infrastructure projects until being told to leave by the U.S. Department of State in 1991 after civil war broke out. The country is now known as the Democratic Republic of Congo. 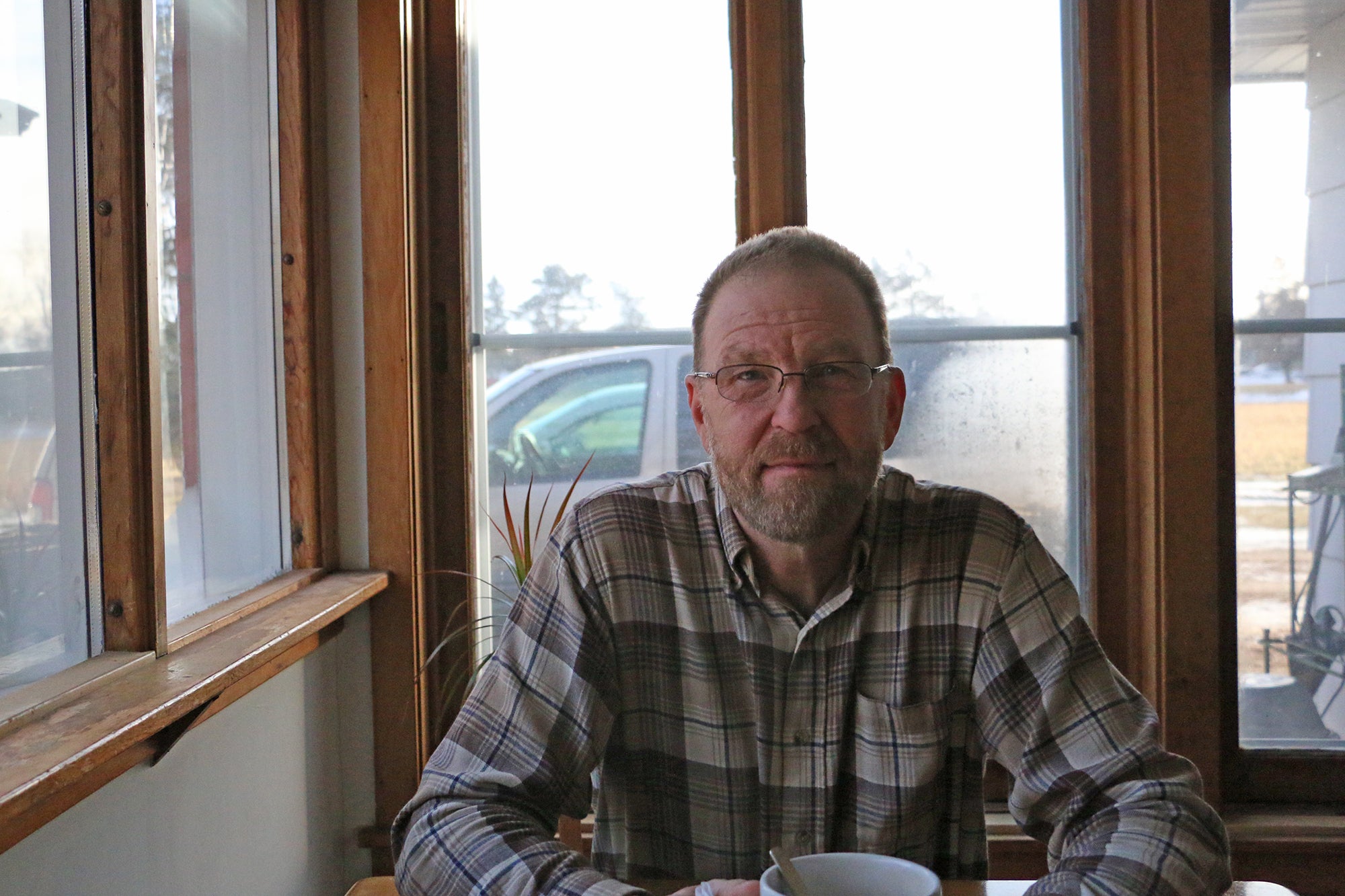 Paul Solie, a Barron, Wis. native, decided to run for city council after noticing a lack of participation in local government. Rich Kremer/WPR

When Solie returned to Barron in 2013, he said he noticed a lack of participation in city government including open seats on the council and decided to throw his hat in the ring with a campaign focused on safety and fiscal responsibility aimed at keeping property tax and city fee increases from driving down property values. He said he too would work to represent all residents and would be honored to hear concerns brought by Somalis.

"I’m sure that they are facing different issues than what the generations that have been here before," said Solie. "So, those things will have to be faced. And some of that, I think, is housing and child care."

Nasteho Osoble, who came to Barron in 2013, has dealt with a lack of housing firsthand. Her daughter, who has a family of six, was interested in moving to the city but was unable to find a big enough space, Osoble said.

"I’m hoping that businessmen can build houses so people can start to move into Barron so Barron can be a bigger city," said Osoble — who's daughter now lives in Mankato, Minnesota. 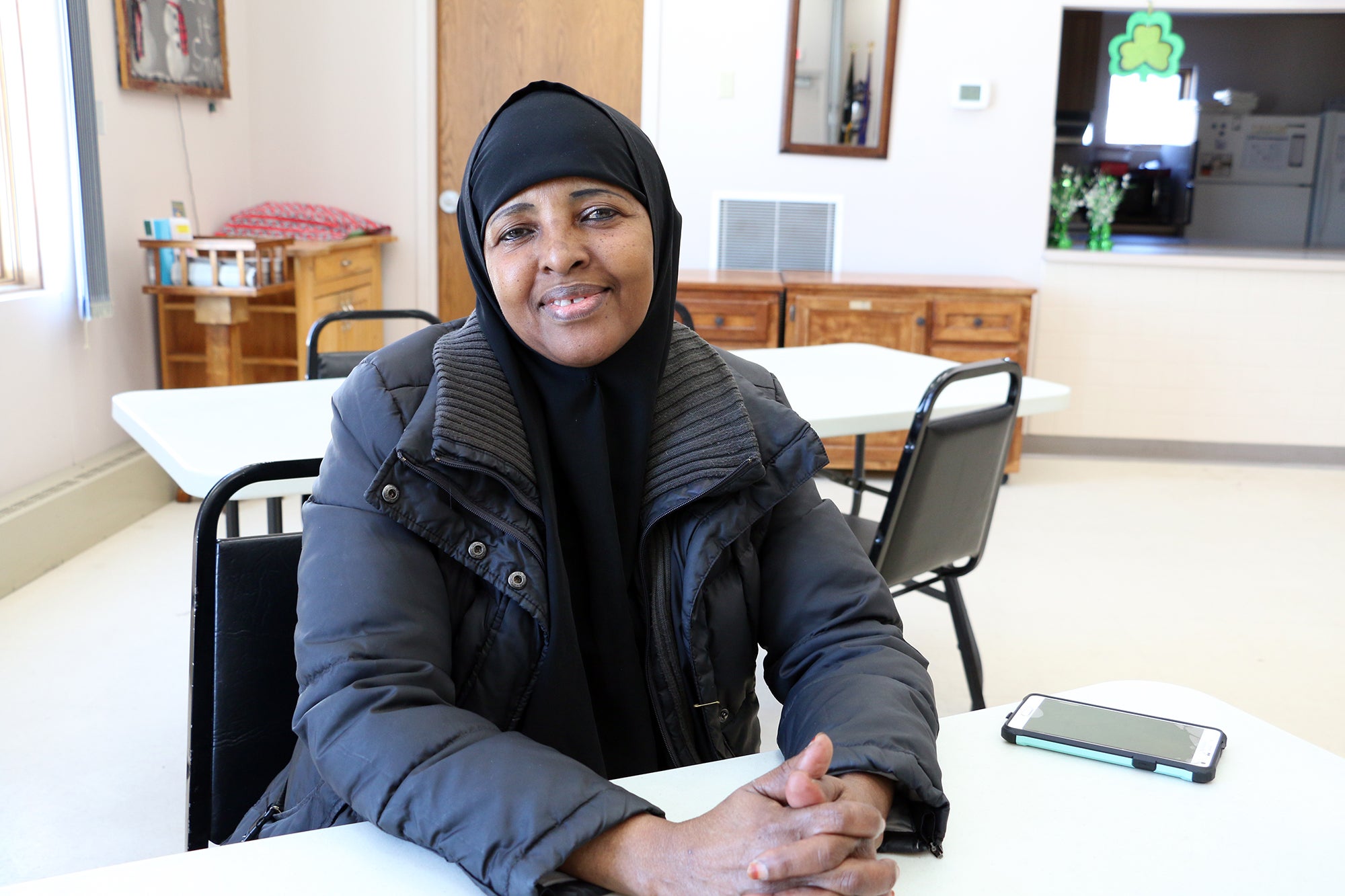 Nasteho Osoble moved from Somalia to Barron, Wis. in 2013. She became a U.S. Citizen in October 2018. Rich Kremer/WPR

She said it would be wonderful to have a Somali on the city council to address housing and other issues facing the community.

"We are a part of this community right now but we need to be part of the government so we can have a say," Osoble said. "Isaak would be a voice for us. No. 1, if we have an issue, Isaak could represent us. We could give the message and Isaak."

When the influx of Somalis into Barron began in the 90s, there were tensions within the community. Bob Groshong, who was the editor of the local paper at the time, said there weren’t any major clashes but he heard murmurs of disdain.

"The rumors I heard was that people who worked at the Turkey Store who were already there kind of resented the Somalis because with religious freedom the company did give them prayer times that they have, I think it’s three times a day," said Groshong.

Hormel Foods, which owns the Jennie-O Turkey Store in Barron wouldn’t agree to an interview for this story but said in a statement that the company celebrates its diverse workforce and has the highest respect for the multicultural team at the plant.

"Probably the last year I’ve gotten more and more calls from Somali individuals looking to start businesses, which is great." said Armstrong. "One of the key drivers of Barron County economic development is startups."

He said ideas have included shuttles for Somalis who don’t have drivers’ licenses and a commercial kitchen.

Fadumo Sal Hassan has been in Barron for 10 years and while she didn’t have the opportunity to learn to read or write in Somalia, she became the second Somali business owner in the city. 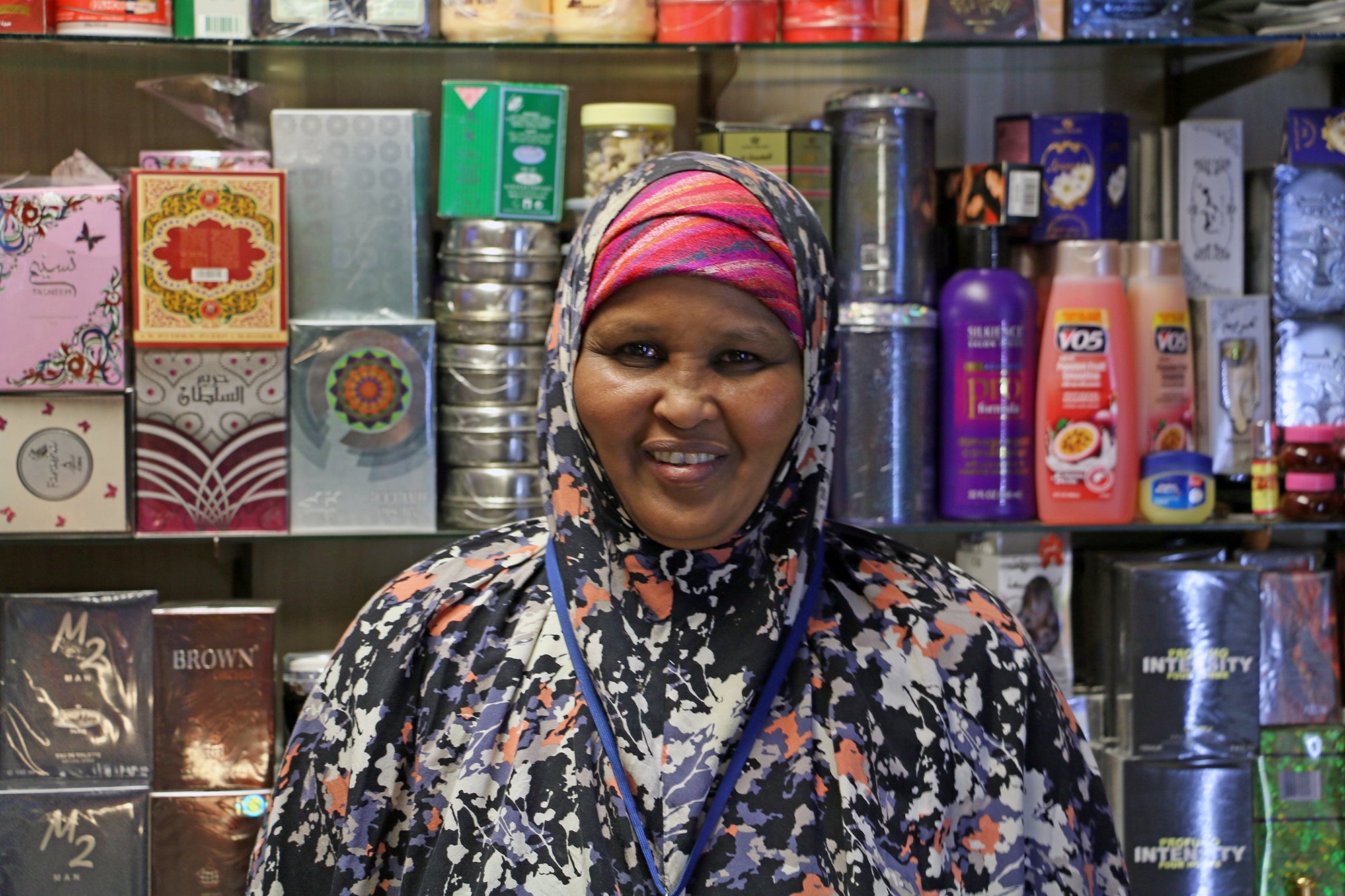 One wall of her store — Bushra Fashion Shop — is lined with brightly colored clothing. The opposite wall is filled with beauty and hygiene products. The back room is stocked with canned and dried goods available in Somalia. Hassan said Mohamed has helped read and translate documents for her. She would be happy to have him take a role in city government.

"We would love to have someone who can be a liaison for this community in both ways," said Hassan. "He would be a voice for anyone who speaks Somali or would represent in the city council."

On a recent Saturday, Mohamud Farah works as a volunteer interpreter at a test prep class for the U.S. Citizenship test. The training, offered by the nonprofit group Immigrant Advocates, is held every Saturday for Somali residents at the Barron Public Library. 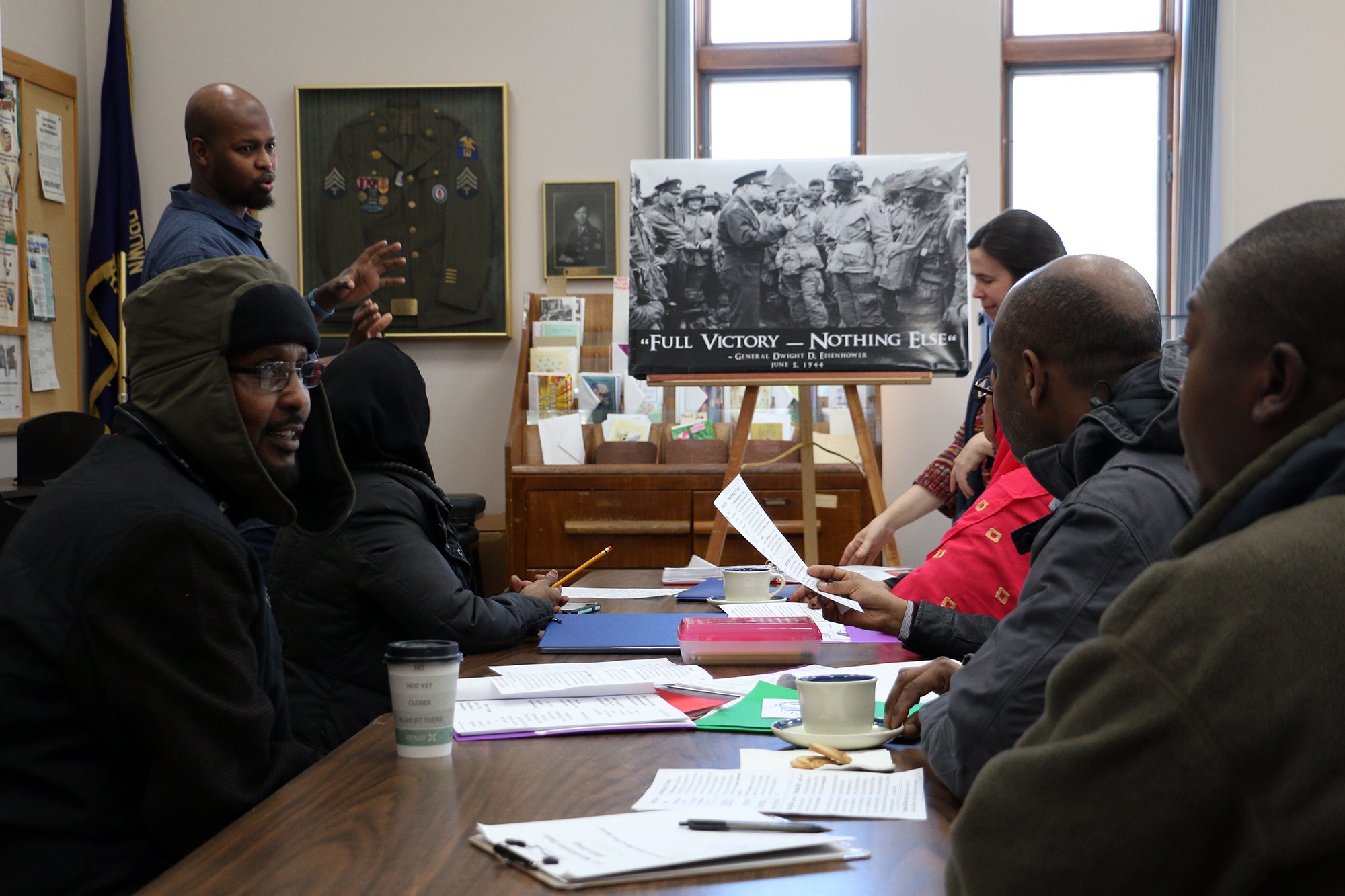 Somali residents study at the Barron Public Library for upcoming U.S. Citizenship tests. Test-takers are presented with 10 questions picked from a list of 100 during naturalization interviews. Rich Kremer/WPR

Farah said running for local government is a big step for Somalis in Barron. And whether they win or lose, he said it’s setting an example for future generations.