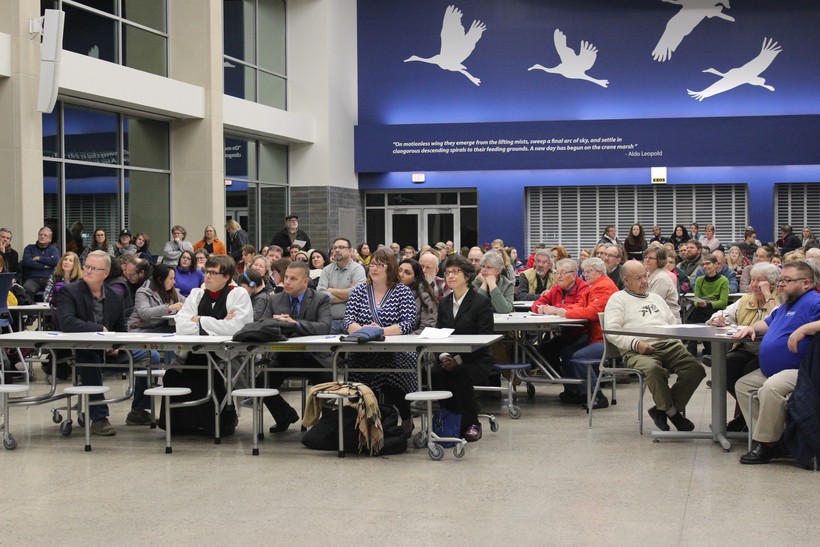 Several hundred people gathered at Baraboo High School on Nov. 19, 2018, to discuss a photo of students giving what appears to be a Nazi salute. Bridgit Bowden/WPR

Parent: 'This Is Happening Everywhere'
By Bridgit Bowden
Share:

After a photo showing a class of male Baraboo High School students giving what appears to be a Nazi salute went viral last week, many Baraboo residents are wondering what comes next.

Several hundred people gathered at the school Monday evening in the first of three meetings hosted by the school board to hear leaders from the school district, the town and local religious groups discuss how the town can move forward.

Marcy Huffaker, who is Jewish, has two kids who attend Baraboo High School and a third who graduated last year.

"My first thought was 'have I been foolish to think that I could raise my family here?'" she said. But, she said she thinks it's something that could happen anywhere, pointing to statistics that show a recent uptick in hate crimes.

"This has put a spotlight on our town, and brought out in the open that racial discrimination exists in our community and schools," she said. "We are not unique, this is happening everywhere."

Rabbi Laurie Zimmerman is the rabbi at Congregation Shaarei Shamayim in Madison, where the Huffaker family are members.

"We are at a crossroads in this country," she said, asking community members to decide whether or not they will choose to resist white supremacy or look the other way.

While she said she has no intention to condemn the boys in the photo, she assumes many of them may not have understood the meaning of the gesture.

"The image is a manifestation of growing antisemitism, racism, xenophobia, and Islamophobia in this country," she said. "Context matters."

The school district and the Baraboo Police Department are investigating the incident. Baraboo Schools Superintendent Lori Mueller said many have asked her what consequences the boys in the photo will receive.

"Please understand that the photo as alleged is an issue of free speech, and as such is a protected right," she said. "Our focus as a district is shifting to work hand in hand with these students on restorative practices that can come from their hearts."

The next meeting, which will include the opportunity for public comment, will take place on Thursday, Nov. 29 at Baraboo City Hall.