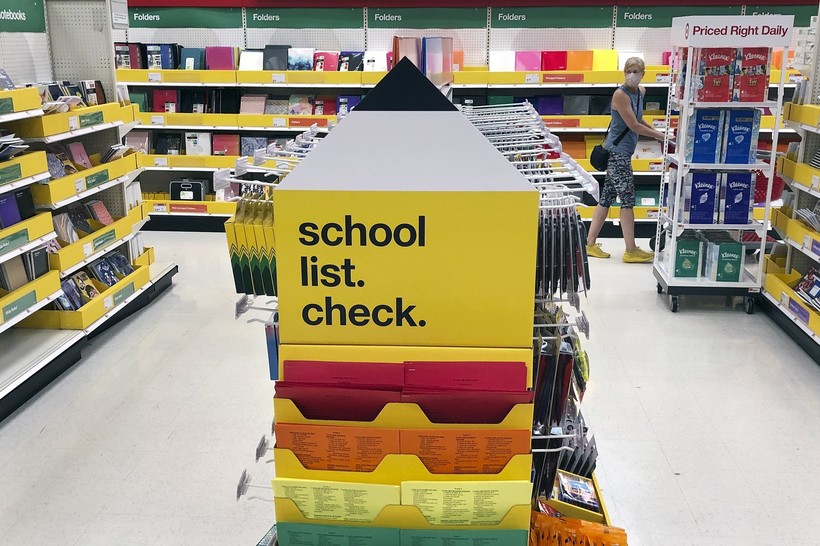 Back-to-school supplies await shoppers at a store on Saturday, July 11, 2020, in Marlborough, Mass. The pandemic has dragged into the new school year and wreaked havoc on reopening plans. That has extended to the back-to-school shopping season, the second most important period for retailers behind the holidays. Bill Sikes/AP Photo

Back-To-School Shopping Season A Success For Retailers, But Supply Chain Troubles Could Continue Into Holiday Season

Despite supply chain and hiring woes, experts say retailers in Wisconsin have had a successful back-to-school shopping season.

Jerry O'Brien, the executive director of the Kohl's Center for Retailing at University of Wisconsin-Madison, said "it's actually been a pretty good season in spite of lots of problems."

"Retailers are pretty happy with the sales," said O'Brien. "They just wish some of the other issues were better."

A National Retail Federation survey in July predicted $37.1 billion nationwide in back-to-school spending, and $71 billion in back-to-college spending. Those are both record totals.

Notebooks, paper and folders are among the items facing shortages, and electronics have been experiencing "a huge rush," O'Brien said.

"There's quite a pent-up demand, which I think is fueling the sales that retailers are happy about, but they're also fueling a lot of the shortages," O'Brien said.

Demand for certain products has led to bottlenecks in the supply chain, and chip shortages this year have created further problems for a wide range of consumer products, from laptops to cell phones and even automobiles. Those factors have affected the prices consumers pay for products.

"There certainly have been noticeable price increases, particularly on some of these items that are hard to come by," said O'Brien. "This is a supply-and-demand economy."

O'Brien said imported items are more likely to be affected by shortages, given COVID-19's impact on the supply chain.

"Clothing, accessories, shoes, you know, there's not a shortage of those items, but you might not get your first choice," said O'Brien. "Sometimes for students, that could be a problem, particularly a young student."

O'Brien said shortages have driven people toward online shopping, even beyond the effects of the pandemic.

"It's a self-fulfilling prophecy," said O'Brien. "If you can't find it in the store, you have to go online, and I would say the comfort level with online shopping is at an all-time high."

Eric Salzwedel is the co-founder of the non-profit Do Good Wisconsin. The organization's annual supply drive, which started in 2019, supported 300 teachers across the state this year, Salzwedel said.

"A lot of the teachers that I know are friends of mine, and are spending a lot of their own money on supplies," said Salzwedel. "So I'm like, well, let's see if we can support some of these teachers with school supplies that they need."

He said the business he worked with to get the quantities of supplies the drive needed this year struggled to connect to vendors at times.

"It was a tougher situation, for sure," said Salzwedel. "But we were able to still get the supplies that we in particular needed."

Salzwedel said prices were another struggle.

"They do have the ability to give us something in a very, very high quantity needed, but unfortunately, it's like the cost isn't as low as you might see it in the store that you might shop at," said Salzwedel.

Nonetheless, Salzwedel said he hopes to keep expanding the drive in future years.

"We want to make sure we can increase supporting more teachers and even giving them more supplies," said Salzwedel.

What This Means For The Holidays

As for what is ahead, O'Brien said "there's a lot of optimism," but COVID-19 variants like delta could impact the holiday shopping season.

"If the variant begins to cause close downs again ... that will be a massive effect," said O'Brien. "It closes down factories, shipment, shipping containers, trucks, stores, so that would be big."

"It's so hard to discuss a year from now when we really don't know how these variants are working out," said O'Brien.

In the meantime, O'Brien's suggestion to shoppers is to plan ahead.

"If you have specific needs for the holidays, if there's a brand or a particular item or electronics that you want, I would suggest getting it early," said O'Brien. "If you're more flexible, I think there'll be things there again, it's just there'll be some hot items that just won't be available."