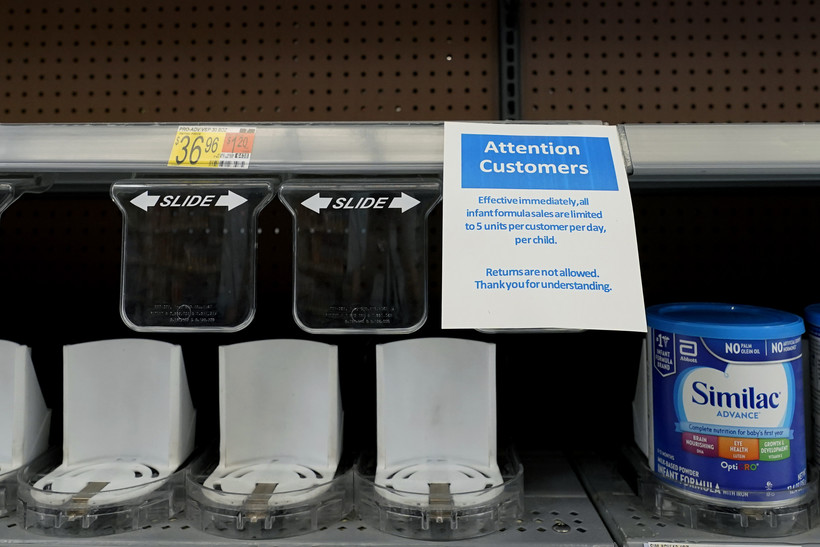 Shelves typically stocked with baby formula sit mostly empty at a store in San Antonio, Tuesday, May 10, 2022. Parents across the U.S. are scrambling to find baby formula because supply disruptions and a massive safety recall have swept many leading brands off store shelves. Eric Gay/AP Photo

Baby formula shortage: What Wisconsin families can do to navigate it

As the shortage of baby formula continues in the United States, some families have found ways to continue feeding their little ones safely and regularly. But others haven't been so lucky.

Children's Wisconsin has reported an increase in babies coming to the hospital suffering from issues like malnutrition due to a lack of formula or inadequate formula substitutions.

Jennifer Crouse, clinical nutrition manager at Children's Wisconsin, spoke with Wisconsin Public Radio about what the hospital is seeing and what families can do to keep their baby's stomach full.

Brady Carlson: How significant is this increase in infants the hospital is seeing with issues resulting from a lack of access to formula?

Jennifer Crouse: I wouldn't say it's a huge number, but certainly it's always concerning when we see kids that are getting admitted or coming to our ED (emergency department) that are having issues with, in many cases, not having enough to eat — which is really sad — or potentially not meeting their nutrient needs or having some intolerance or issues related to what they're getting.

Any babies who are having issues with growing well or having intolerance is certainly something we're concerned about.

BC: What does it take for a child in that situation to get back to being in good health? It is as simple as getting formula into them?

JC: Yeah, getting proper hydration and nutrition. Unless they're breastfed or getting human milk, formula is really the only option for babies. That's why we're seeing a lot of families that are having a lot of problems when they're not getting what is really just (the) sole nutrition for their kids.

We know that families are trying creative solutions; but unfortunately, some of the substitutes that people are trying just don't have the right nutrients. They don't have enough calories or protein or fat, or things like calcium and iron that are really, really important for kids' growth. Those are the things that the babies need, and once we can get the right nutrition in them, they recover for sure.

BC: We've heard those warnings about why it's unsafe to use some of these recipes that have been floating around or simply putting milk in a bottle. For families that are having trouble finding the formula that they need, what is the recommendation?

If they can't find things in stores, we're recommending 211, which is just a simple number you can call to access food pantry resources, or there's some emergency formula closets in the city of Milwaukee. Not every food pantry has formula, so just to save some time calling 211 to find out which areas might have that is good for families to do.

BC: We've heard in recent days about how Congress and the White House have made moves to increase formula supply in the U.S., and to make it easier for people who are using those benefits to buy formula. How optimistic are you that this shortage can ease soon and families won't have to worry about whether they can find the formula that they need?

JC: I think time will tell. I'm not sure how much formula is coming in. I've seen that, too, where formula is getting flown in — right now it's domestically that we're having a shortage, but in other areas of the world they're not experiencing the same shortages. Certainly that's going to help alleviate some of the shortage here. I don't think that's going to make all the difference in the world.

A lot of the impetus for this was (the) big formula recall back in February of Abbott Nutrition products, and the plant that was making those products, which made about 50 percent of their powdered formula, is still closed. I think what's going to make the biggest difference, honestly, is when that plant is able to reopen. Even after it reopens, it's going to take a couple of months to get supply back on the shelves.

I think we're in this for a while. Hopefully some of the measures that are being taken to get ingredients to suppliers so they can really max out their production to other plants around the country that are open and getting formula from overseas will help, but I don't think we're going to be in a really easy place for still several months.