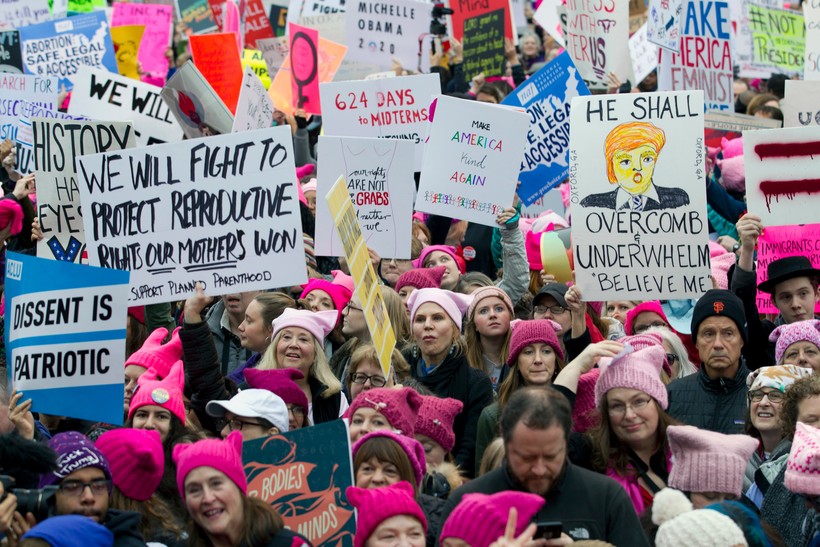 In this Saturday, Jan. 21, 2017 file photo, demonstrators with pink hats begin to gather in Washington for the Women's March on the first full day of Donald Trump's presidency. More than five decades after Americans poured into the streets to demand civil rights and the end to a deeply unpopular war, thousands are embracing a culture of resistance unlike anything since. Jose Luis Magana/AP Photo

Authors: Women's Anger Is A Catalyst For Societal Change

Throughout history, there’s been a general, unspoken agreement that getting angry, especially for women, is something to be avoided.

Angry women are portrayed as ugly, hysterical — even as witches. But what if getting angry was actually productive? What if women’s rage was useful, beneficial, creative and possibly even beautiful?

Two new books make this argument. In "Good and Mad: The Revolutionary Power of Women’s Anger," writer and author Rebecca Traister tells us that we should value anger as a catalyst for societal change.

"So many of the social and political movements that have transformed this country are movements that did find their spark in anger at inequality and injustice," Traister said. "However, because we are so actively and steadily discouraged from appreciating or even acknowledging women's anger as politically consequential, the source of so much of that energy behind those social movements has been obscured for us because we haven't been taught to look at and appreciate that anger coming from women."

Cristen Conger and Caroline Ervin, authors of "Unladylike: A Field Guide to Smashing the Patriarchy and Claiming Your Space," and hosts of the podcast "Unladylike," combine women’s history and self-help in an edgy graphic novel-style book that is not afraid to question wage gaps, racism and gender stereotypes.

They think women should embrace some "ragespiration."

"It's a combination of rage and inspiration, letting that anger drive you towards something rather than shrinking away from it because women aren't supposed to be angry," Conger said. "Take that 'ragespiration' and explore it, see what's there and what really is driving you so mad. And from there kind of figuring out what you can do with it. I feel like so much of women's history is really just layers upon layers of ragespiration building and building over time."

The anger might lead to big public displays of change, like the Women’s March in cities all across the country.

It might to more systemic shifts, like more women running for office or working on political campaigns.

Or even personal, individual change.

"There’s so many ways our rage can take shape," said Conger. "I think it’s just as important to let that rage lead you into ... activism as it is to leading you to taking better care of yourself on a day to day basis," Conger said.

While Traister said she doesn’t want to give out health tips, she said when she let herself be angry — really, really, angry — she felt physically better.

"It was like being able to express the full range of human emotions," said Traister. "And I did feel great. I slept well. I wanted naturally to exercise more, eat well, it was a period where I had a great sex life with my husband, it was a period of great mental clarity and good physical health."

A driving force behind both books are helping women find they are not alone in having anger or wanting to express anger.

"What you're seeing all over the country right now is women of all ages and backgrounds standing up and saying, 'Absolutely not. This will not continue,'" said Ervin. "And collectively that has been so powerful."