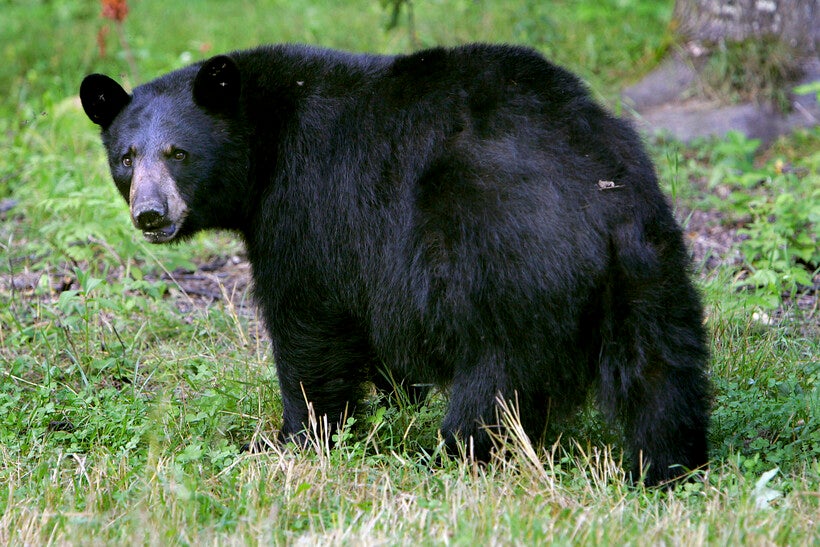 In this Wednesday Aug. 1, 2007 file photo, a black bear walks across the ground in Lyme, N.H. Cheryl Senter/AP Photo

Authorities: Bear was uncharacteristically aggressive when it attacked a Medford couple in their home

Experts are baffled by bear’s aggression, but say there are ways to minimize unwanted bear encounters
By Diane Bezucha
Share:

Authorities say the black bear that was killed after it broke into a Medford home and attacked the owners was unusually aggressive.

"It's not unusual for people in our area to run across black bears or have some sort of interaction," said Taylor County Sheriff Larry Woebbeking. "What’s very unusual in this case is this bear acted very out of the norm, very aggressively. This couple simply spoke to the bear through a window, they never even exited the house."

Around 11 p.m. Friday, a Medford couple noticed a bear eating from a bird feeder outside their home. The two opened a window and yelled for the bear to go away, but the bear turned and charged at the house, breaking through the window and attacking the husband and wife, according to the Taylor County Sheriff’s Office.

The woman attempted to fight the bear off with a kitchen knife as it mauled her husband. Eventually, the man was able to get away, grab a handgun and shoot the bear, killing it.

Woebbeking said the bear had to crawl up the side of the house and break through a window screen to attack the couple.

"This bear acted very aggressively and really had to go out of its way to encounter these people," Woebbeking said.

Brad Koele, a wildlife damage specialist for the state Department of Natural Resources, said the couple responded appropriately by making noise from what should have been a safe location. In most cases a bear would respond by running into the woods and that would be the end of it.

"This type of reaction by a bear is pretty uncommon," Koele said. "The woman yelled at the bear to harass it and get it to leave the bird feeder, and it responded by coming towards the house and climbing through the window, which is very uncharacteristic of typically how bears respond."

Koele said that attacks like this are incredibly rare. Since 2013, there have only been nine reported instances of bears injuring people in Wisconsin.

Both the husband and wife sustained numerous bites and injuries from the attack but have since been released from the hospital. Their two children, who were in their bedrooms asleep at the time of the attack, were unharmed.

The bear is being tested for diseases by the DNR and the Taylor County Health Department. But Koele said it’s pretty unlikely for a disease like rabies to be the reason for a bear to behave uncharacteristically. A nuisance bear near Wausau recently turned out to be severely malnourished because it had porcupine quills in its mouth and couldn’t eat.

The couple told authorities, there was a cub that ran off as the adult bear attacked. The cub has not been seen again in the area, and Koele said a yearling should have no problem surviving on its own.

How to minimize unwanted encounters with bears

There are about 28,000 black bears throughout Wisconsin, according to the DNR.

Koele said they range from the Apostle Islands to Green County, but are mostly concentrated in the central and northern parts of the state.

In general, they try to avoid contact with humans, but they are sometimes attracted to items in your yard or campsite and can act aggressively to protect cubs or food sources.

"As a precaution, we encourage folks to do good inventory around their home and try to reduce those attractants to prevent conflicts with bears," Koele said.

Garbage cans, grills, compost bins and pet food should be properly cleaned and sealed or brought inside at night. The DNR also recommends that you only use bird feeders during winter months when bears are less active. Summer bird feeders should be brought in at night or hung at least 10 feet off the ground.

Koele said the DNR partners with local and national authorities to respond to nuisance bears — those hanging around or causing damage. In most cases, Koele said they can resolve the issue with simple mitigation techniques provided over the phone. But in more challenging situations they can trap and relocate the bear.

When hiking or camping, the DNR recommends traveling in groups and making lots of noise to scare off bears. Campsites should be kept clean and all food and scented products — such as toothpaste and sunscreen — should be kept in bear canisters or vehicles, never your tent.

And on the rare chance you happen to encounter a bear, never approach it. Get yourself to a secure area so the bear has a clear escape path. Make a lot of noise and raise your arms above your head to try and scare it away. However, do not run, play dead or turn your back on the bear — always fight back.

If you do come in contact with a bear, Koele recommends shouting, 'Get away bear!'

"Make noises like that, yell at the bear, wave your hands, make yourself try to appear as big as you can and slowly back away … keeping your eyes on the bear as you back away to some safety," Koele said.